Western allies have a lot to answer for 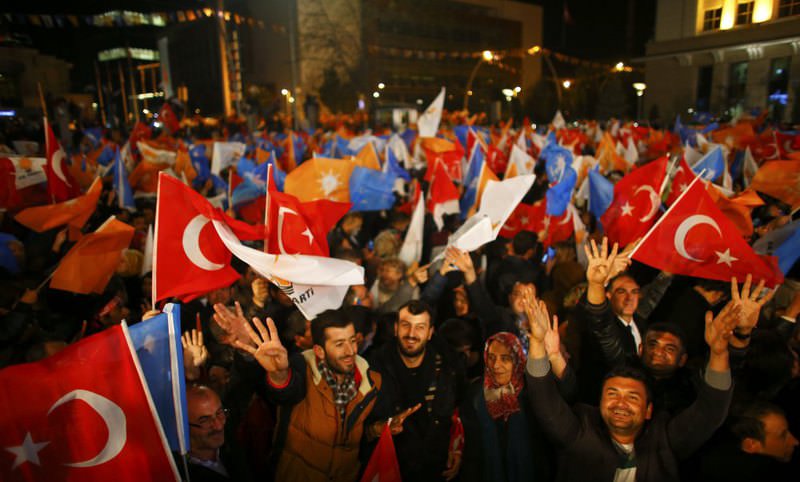 People wave flags outside the AK Party headquarters in Ankara after the party's victory in the Nov. 1 elections.
by Merve Şebnem Oruç Nov 11, 2015 12:00 am

As Western countries continue to postpone solving the problems in the region, Turkey, with a landslide win for the AK Party in the Nov. 1 elections, a victory for democracy, remains the greatest hope for the people in the Middle East, who are suffering all kinds of chaos under their current dictatorships

The Justice and Development Party (AK Party) got almost 50 percent of the vote in the Nov. 1 elections, reclaiming its majority in Parliament with a great victory. With no doubt, the outcome will be determinant in terms of Ankara's foreign policy as well as internal affairs and other matters. Turkey's foreign policy has been discussed and criticized sharply during the last four election campaigns in the last two years, including the local elections.

We can expect that the AK Party will not have a drastic change of tack with regard to its foreign policy, especially at such a critical moment in the Middle East. There may be some new adjustments, but the AK Party will continue on with the core of its policies. Ankara will keep its commitment to the people's demands for reform in the region and resume its support for the opposition groups in Syria. Since the start of the Arab Spring, Ankara has chosen to go through with a humanitarian and moral-based foreign policy and supported the people's struggle against oppressive regimes. It will certainly not change this path, especially after being a target for it.

But the next question is whether Turkey's allies will change their policies from the point of Turkey and the region. U.S.-led Western countries have long postponed solving problems in conflict zones in the Middle East. Let us be clear, the main purpose of the suspense in question was to wait until the AK Party and Turkey's powerful and charismatic president, Recep Tayyip Erdoğan, were ruled out. The Gezi Park protests in 2013, the Gülenist coup attempt in 2013 and 2014 and the Oct. 6-7 Kobani clashes in 2014 or the PKK's end of the cease-fire in 2015 were all part of the storm targeting Erdoğan and his party, and supported by Turkey's Western allies. Those were all about getting rid of Erdoğan. The West has kept saying that Syrian President Bashar Assad must go for years, but has never taken a step for that to happen. Once Erdoğan was out of the equation, the West would not hesitate to find solutions for the region. As of Nov. 1, that plan has failed.

Along with this, the problem they set back to solve has started to threaten the West as well. The refugee crisis, for example, has become Europe's biggest issue. Any leader who states their opinion in Europe has to admit that cooperating with Turkey is a must to stop the influx of refugees. This is why German Chancellor Angela Merkel rushed to Turkey before the Nov. 1 elections regardless of the criticism.

In addition to that, the U.S., Turkey's most important ally, needs to work with Turkey more than any other country in its fight against the Islamic State of Iraq and al-Sham (ISIS). In order to do that, Washington has to show respect to Turkey's concerns on delicate matters such as its weapons supply to the Democratic Union Party's (PYD) armed People's Protection Units (YPG) in northern Syria. Operation Inherent Resolve spokesman Colonel Steve Warren last week said: "As of now, we are not providing weapons or ammunition to the YPG. The weapons that we've provided thus far, with the ammunition that we've provided in our one airdrop that was executed, were for the Syrian-Arab coalition. As of now, future resupplies will also go to Arab-vetted Syrian opposition members. So, as of now, that's where our policy stands." Answering a question about Turkey, Warren added: "I'm not going to get into the details about diplomatic discussions. But what I'll tell you is that we're in very close contact with them. Obviously, the Turks have concerns. They're our partners and allies. We're going to address those concerns. We're going to work with them to achieve our common goal, which is to defeat ISIS." Such statements indicate that the U.S. has also started to change its policies vis-a-vis Turkey and the region whether they like it or not.

However, the elephant is still in the room. The Vienna talks have not suggested any compromise over Assad. Maybe the 2015 G20 summit, which will be held on Nov. 15-16, in Antalya, Turkey, will be a great chance for a fresh start. After all, Erdoğan, who was attacked, alienated and vilified for two-and-a-half years, yet was chosen by Turkey's people despite all the pressure, will be hosting the summit attended by world leaders such as U.S. President Barack Obama, Merkel and Russian President Vladimir Putin, and determining the agenda.

Let's see what world leaders, and especially Turkey's Western allies will do after the circles they supported failed to get rid of Erdoğan and the AK Party.
Last Update: Nov 11, 2015 8:57 am
RELATED TOPICS