Middle East is much more than 'a quagmire' 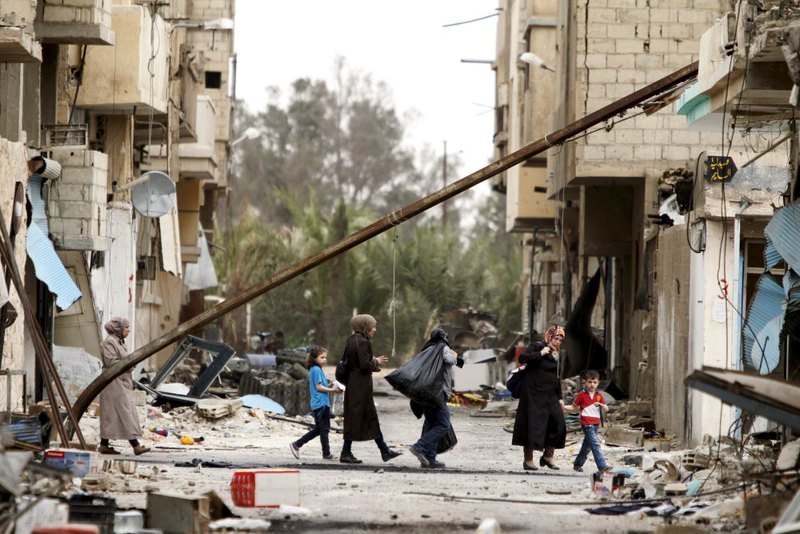 Residents carrying their belongings as they walk during a return visit to the city of Palmyra, Syria.
by Merve Şebnem Oruç Apr 21, 2016 12:00 am

The Sykes-Picot Agreement-drawn Middle East, which has been deeply damaged since its inception, is proof of the brutal results of the doctrine's divide-and-conquer ethos

The year 2016 is the 100th anniversary of the Sykes-Picot agreement, a secret deal named after the two men, Mark Sykes and François Georges-Picot, who led the negotiations to define the borders in the Middle East as we know them, between the United Kingdom of Great Britain and Ireland and the Third French Republic, with the assent of the Russian Empire. The agreement, which was signed on May 16, 1916, drew the lines along the remnants of the Ottoman Empire, leading to many conflicts that continue today.

The defeat of the Ottoman Empire was based on startling hostility among people who had lived together for hundreds of years, drawing borders along their lands while ignoring their ethnic, cultural and religious differences, paving the way for potential further conflicts. Thus, the Sykes-Picot agreement was one in a series of missteps by the Western world in the Middle East, which has been deeply unsettled for more than 100 years. The West wanted to reshape the region to control it, and here we are today.

When a revolutionary wave started and spread throughout the Arab world in 2011, the so-called Arab Spring became a hope for Middle Easterners to demolish the Sykes-Picot order. Until that spring turned into the Arab Winter, protesters were saying that they had to go after the dictators to get rid of the Sykes-Picot Agreement. For them, it started in Tunisia, Egypt and Libya; they were going after Syria; next would be Iraq, Jordan and Lebanon, and then it would be Israel. However, the revolts turned into a civil war in Syria, which brought a whole new level of regional chaos when the U.S.-led Western world changed its policy against the Arab streets' demands. And DAESH, the brutal terrorist organization found an opportunity to rise and grow in this mess, dashing the hopes for major change for the people of the Middle East when they captured Mosul in 2014 and symbolically demolished the Sykes-Picot border between Iraq and Syria.

The dreams Middle Easterners started to fade after the revolutionary days were replaced by counterrevolutionary strikes and the escalation of terror attacks. However, Western pundits kept suggesting solutions to put out the fire in the Middle East, looking at history books and drawing similarities between religious conflicts in Europe 400 years ago and the new sectarian conflicts in the region. Since the U.S.-dominated and Western-controlled world order is not sustainable and U.S. policy has not been well responded to in the Middle East while Russia and China are the new rising influential powers, the policymakers and analysts in the West have begun to admit that U.S.-led Western policy needs to be reviewed. But, instead of facing the fact that the leading role they played in the past was the first in a series of Western missteps that eventually caused this mess, they are talking about reshaping the region, offering new borders, new nation-states and new maps.

For example, Henry Kissinger, whose name is enough to alarm non-Americans into chaos, brought up a solution for the problems in today's Middle East, exemplifying the Westphalia peace treaties negotiated in Europe at the end of the 30 Years War. In his book "World Order," published in 2014, he basically said that various Christian groups had been killing each other until they understood that they had to live together, but in separate units. In that way, Kissinger wants us to understand that we must learn how to live together, but we need to be divided again to do that.

Well, the Westphalia peace treaties did not actually bring peace to Europe. The so-called peace treaties opened the way for the Napoleonic wars a century later. The winners of Westphalian sovereignty were nationalism and secularism. And in the end, two world wars, flamed by nationalism, ended up at our door. Then Europe started to find ways to unite again after millions died due to war, disease, massacres and hunger.

Henry Kissinger and others who say the only solution to put out the fire in the Middle East is a new Westphalian model are not really seeking peace. As Western influence spread across the globe, the Westphalian principles formed the core of international law and the world order. They just want to establish a new order, draw new Sykes-Picot lines, without mentioning Sykes-Picot but giving examples from the West, and once again control the world in parallel with their own interests. Unfortunately, they are getting closer to doing that since leading figures in the Middle East have no intention of coming together, embracing and listening to each other, offering their own solutions and achieving common sense and a common consensus.
RELATED TOPICS