How much longer will Washington keep Gülen in US? 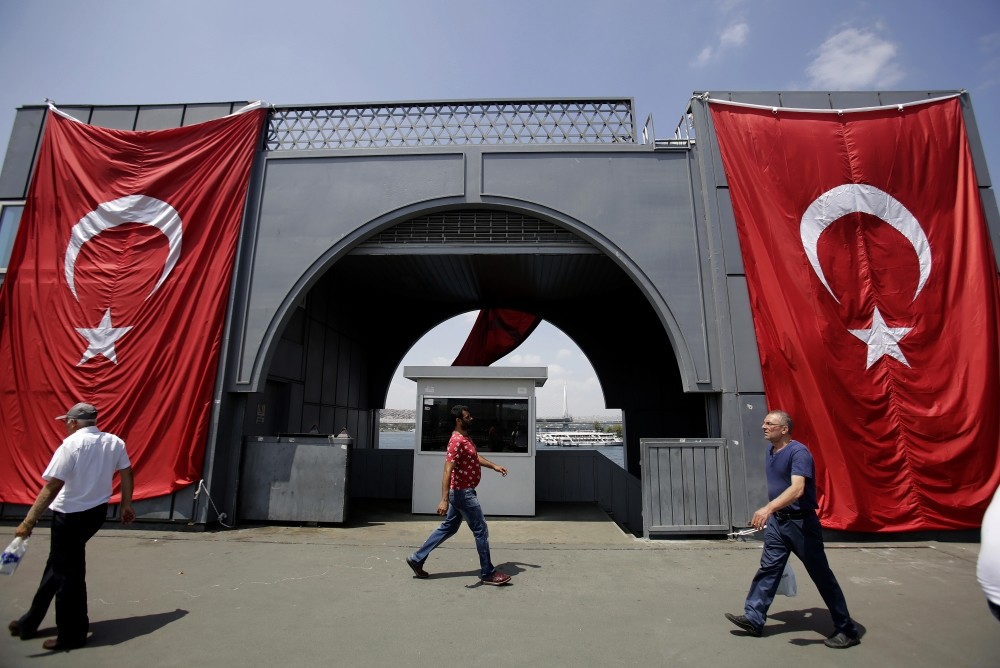 Turkish people do not trust the U.S. due its silence on the July 15 coup attempt which is Turkey's 9/11

On July 15, the Turkish people foiled a bloody coup attempt launched by the Gülenist terrorists in the Turkish Armed Forces (TSK). The defeat of the coup attempt has left Turkish-U.S. relations in a state of uncertainty.

On that night the people found themselves facing tanks, helicopters and F-16 fighter jets, but human rights advocates and democratic governments around the world were unable to show immediate support for Turkey. In particular, the U.S., one of Turkey's most important allies, was clearly waiting to see who would win when the Gülenists killed hundreds of people, bombed Parliament in Ankara, attacked state facilities such as the country's intelligence headquarters, the TSK headquarters, the Istanbul Stock Exchange, occupied two airports and two bridges in Istanbul and raided national TV stations. It was crystal clear that Turkey was in the midst of a coup attempt, and yet the U.S. Embassy in Ankara chose to call it an "uprising" in its emergency message to U.S. citizens. When the coup attempt failed, U.S. President Barack Obama's administration voiced its strong support for Turkey's democratically elected government, but it was late, according to Turks.

Turkish society is quite sure that Fethullah Gülen, the leader of the Gülenist Terror Organization (FETÖ) living in Pennsylvania in the U.S. since 1999, was responsible for the coup attempt. Arrested plotters' testimony has revealed that Gülen was giving the orders. Chief of General Staff Gen. Hulusi Akar, who was taken hostage during the attempt, said that the plotters tried to convince him to talk to Gülen, their leader, on the phone while they were asking him to join them. But still, the U.S. seems reluctant to extradite Gülen to Turkey. The U.S. may think that it is convenient to ask for evidence first, but Washington can show a sign of cooperation and arrest him or at least give assurances that they will take measures immediately to guarantee Gülen cannot flee the U.S. while they are waiting for the formal extradition procedure to start. In the meantime, media in the U.S. frequently gives Gülen a chance to talk. Lately, Gülen spoke to CNN's Fareed Zakaria and claimed: "It looks more like a Hollywood movie than a military coup. It seems something like a staged scenario," accusing President Recep Tayyip Erdoğan of being behind the coup. It is as absurd as the conspiracy theory that the U.S. staged 9/11, but it looks like the Americans are ready to buy it as they keep hearing one side of the story. While Gülen denies being involved in the coup attempt in the U.S. media and his followers circulate videos on social media, he mocks and threatens the Turkish people who foiled the coup attempt and implies there will be more blood. One wonders why the U.S. administration does not take a close look at his sermons, activities and search for evidence to show their support for Turkey. As the U.S. continues its reluctance to cooperate, Turks become more anti-American every day and believe Washington was behind the coup attempt since the U.S. still protects him. Ankara has asked what the U.S.'s reaction would be if Turkey protected someone who is a huge threat to the U.S.

Two days before the attempt, prosecutors in Ankara announced that a dossier seeking to Gülen's extradition from the U.S. was finally ready and had been sent to the Justice Ministry. Turkey had listed Gülenist networks as a terrorist organization, accusing Gülen of building a "parallel structure" in the state and attempting to overthrow the democratically elected government in a judicial coup attempt in 2013. The alleged crimes were already serious, extending to corruption, infiltrating state institutions, conspiring against the state and the military and spying. And now, a bloody coup attempt has been added to Gülen's list of charges. The blood of hundreds is on his hands.Following Ankara's formal request, the U.S. is obliged to examine it under the 1979 Turkish-U.S. extradition treaty. Accordingly, both parties undertake the extradition if the offences are crimes in both countries. Since the abovementioned accusations require punishment in the U.S., Gülen should be extradited immediately.

However, the requested party can refuse the request if it concludes that the request for extradition has, in fact, been made to punish the person for an offense of a political character or on account of their political opinions. That is why Gülenists keep making noise, describing Erdoğan as a rigid leader dragging Turkey into authoritarianism and silencing his opponents. Nonetheless, the 1979 treaty clearly states that any offense committed or attempted against a head of government or a member of their families should not be deemed to be an offense of a political character. On July 15, a FETÖ commando assassination team tried to kill Erdoğan in Marmaris, and another group fired at Prime Minister Binali Yıldırım's car on the road to Ankara, two offences that cannot be regarded as being of a political character, even if the U.S. would unblushingly prefer to define the coup attempt during which Parliament was bombed as a political uprising. Besides, the U.S. State Department is the authority to make the final decision, not the Justice Department. In short, extradition is a political decision for the U.S., not a legal one. So we will see whom Washington trusts for the sake of U.S. interests: Turkey or a terrorist leader threating the Turkish state, people and country.
RELATED TOPICS