On the way to Washington, recalling Obama's failures 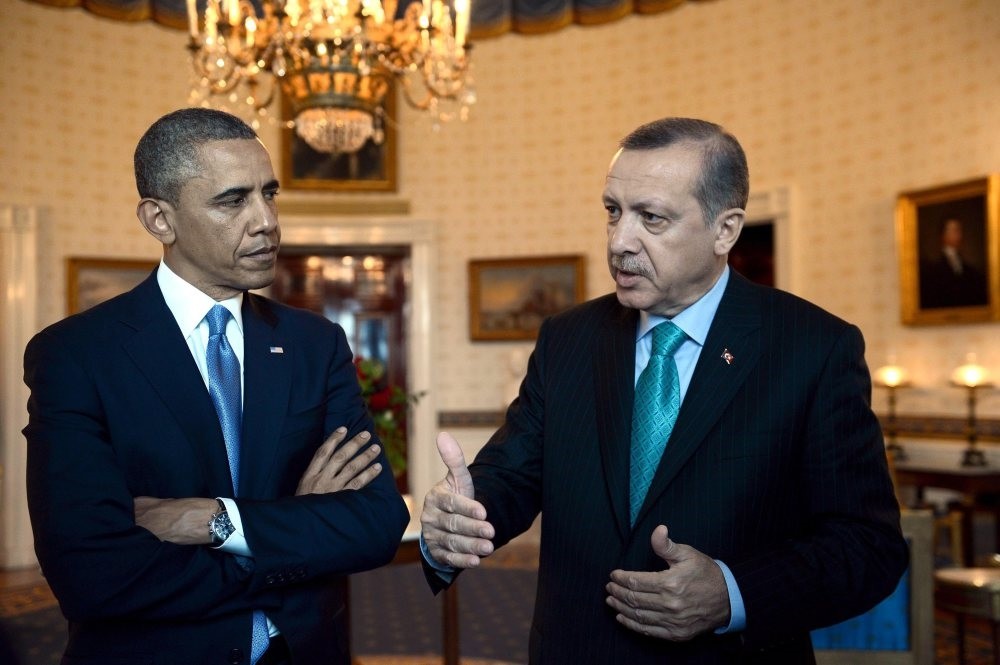 Then Prime Minister Recep Tayyip Erdou011fan and former U.S. President Barack Obama discussing the Syrian civil war and fight against terrorist groups in the Middle East at the White House, May 17, 2013.
by Merve Şebnem Oruç May 16, 2017 12:00 am

Obama's failure after failure in the Middle East has cost Turkey a lot. Thus, all eyes are now scheduled for the meeting between the new U.S. president and Erdoğan

I was on a plane from Beijing to Washington following President Recep Tayyip Erdoğan while penning this column. Since the Turkish public is angry about Washington's decision to provide heavy arms to the People's Protection Units (YPG), the Syrian franchise of the outlawed PKK, all eyes are now turned to Erdoğan's meeting with the U.S. President Donald Trump.

When asked by journalists in Beijing, Erdoğan preferred not to make long statements and just said Turkey's final decision would come after his face-to-face meeting with Trump in Washington.

I remember when former U.S. President Barack Obama and Erdoğan, who was then prime minister, held a joint press conference in the White House Rose Garden in May 2013 like it happened just yesterday. Promising to help Turkey shoulder the burden of refugee movement, Obama reiterated that Bashar Assad needed to go and that was the only way to resolve the crisis in Syria.

When the Ghouta chemical massacre was perpetrated and Assad crossed Obama's "red-line" in August 2013, the U.S. looked as if it planned to quickly launch up to 100 Tomahawk cruise missiles against the Syrian army.

Meanwhile, Assad continued to shell, starve and find other ways to systematically murder the Syrian people. He also used chemical weapons more than a hundred times.

Donald Trump, who has consistently been accused of trying to establish good relations with Russia, was the one with the guts to launch the 100 Tomahawks in question after he came to office. We still do not know whether or not further action is to be taken, but the mess in Syria that the Obama administration left behind is too big to solve even for a motivated U.S. president.

Washington is backing the YPG to cleanse Daesh elements from the territory it seized in Syria since the Obama administration acknowledged the terrorist threat after the fall of Mosul. The whole world waited for weeks to see Obama's plan of action against Daesh. When his plan was finally announced, it was too little too late.

Contrary to the arguments of some U.S.-based think tanks that the U.S. had to pivot toward the YPG because Turkey rebuffed initial U.S. appeals, Barack Obama himself admitted in 2014 that he underestimated the threat of al-Qaida's affiliates in Iraq and Syria in the first place. Al-Qaida was weakened, but its affiliates were rising.

In his speech at West Point in May 2014, Obama acknowledged the severity of the issue saying, "As the Syrian civil war spills across borders, the capacity of battle-hardened extremist groups to come after us only increases."

Turkey has been across the border, and it is a U.S. ally. Although the words came easy for Obama, was taking action that difficult? He chose to abandon and upset Turkey, opening a big wound that won't heal easy.

The former U.S. administration succeeded in sweeping the issue under the carpet. Yet Turkey had not stopped warning Washington about the threat posed by extremism and rising terror. Similar to its warnings with respect to Syria, Turkey also warned Washington many times about the escalating sectarian violence in Iraq.

While we all were waiting for Obama to see the reality or at least keep his promises, the Syrian opposition were intentionally weakened on the ground, and then accused of being weak by Washington. When Turkey said they can be armed and trained, the Obama administration ridiculously claimed that they were not secular enough.

It was obvious that without a motivated and adequately armed force on the ground, airstrikes would not stop Daesh. We already knew that the U.S. was not going to send ground forces; it was going to find people to serve as its proxy army. In short, we could see that Washington was eyeing the PKK's Syrian affiliate, and its choice was no surprise.

Since the beginning, Ankara said it was a huge mistake to use one terror organization to try and defeat another. Washington has blatantly stated that the YPG was not considered to be a terrorist organization under U.S. law but it is a well-known fact that it is the Syrian franchise of the PKK.

For beginners, Turkey's International Center for Terrorism and Security Studies (UTGAM) released a report, "The PKK's Franchise of Terror," discussing this matter as well as the threat of the foreign fighters last week. I also wrote many times on this column about the PKK's regional franchises and when and why the terrorist network changed its organization structure.

Anyway, the stance of Washington could then only be defended by a presumption that Daesh is not an al-Qaida affiliate.

Aside from this, it could be easily seen that U.S. ally Turkey viewed the PKK's attempts to establish a foothold in Syria as a risk that can fuel separatism in Turkey. Considering that violence started to show its face in the southeastern region of Turkey in those days, the Turkish government had every right, and a duty, to think thoroughly about its interests.

It has been years since then. As a matter of fact, Ankara has been too slow to come up with an independent and comprehensive approach to the situation that preserves Turkey's national security, as the Obama administration proved its unreliability in forming a coherent plan for the region.

In the meantime, Obama-favoring media whitewashed the clumsiness, shortsightedness and failures of the former administration, and tried to dress up Turkey as the country that blows hot and cold, drags her feet and prevents intervention in the mess again and again. But who did what has been written in the history, and can easily be found online.

The recklessness of the former U.S. government cost the Turkish people a lot. Looking at the problems Turkey has had to face over the last three years, it can be seen why the public thinks the Turkish government was too patient, way more than necessary and that is why all eyes are on the scheduled Erdoğan-Trump meeting and Ankara's final decision to come afterwards.
Last Update: May 16, 2017 5:04 pm
RELATED TOPICS