Trump could be serious about pulling the US out of Syria 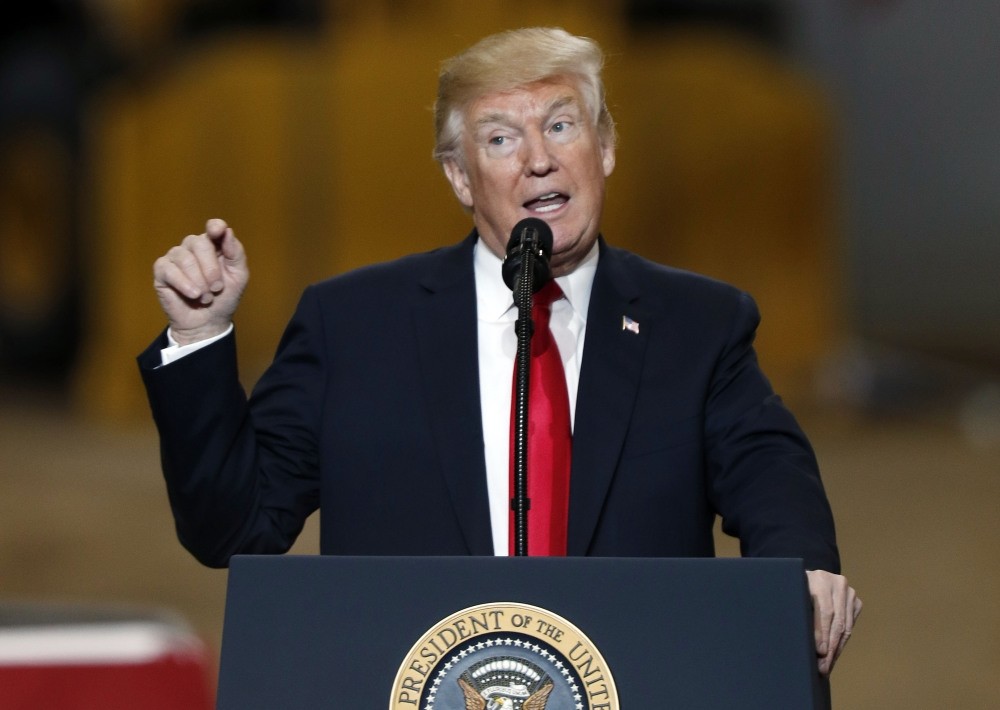 Judging by what Donald Trump has been saying about the Syrian civil war for two years, his most recent comments should not catch anyone by surprise

Judging by what Donald Trump has been saying about the Syrian civil war for two years, his most recent comments should not catch anyone by surprise.

U.S. President Donald Trump's remark last week about leaving Syria soon came as a surprise announcement, but it should not be for those who have been tracking his views about Syria.

Throughout his presidential campaign, Trump attacked his predecessor Barack Obama's Syria policy. Obama's initial goal in Syria was to drive Syrian dictator Bashar Assad from power, as he was the first around the world to say that Assad must go. He later abandoned this policy, chose to ignore Assad's massacres, focused on the brutal Daesh terrorist organization and asked everyone else to do the same. Even when Assad crossed his infamous "red lines" regarding chemical weapons in Eastern Ghouta in August 2013, he did not take action. Long-time U.S. ally Turkey, which has an 822-kilometer border with Syria, warned Obama that the way he was making policy that would not save the future of Syria, and he ignored it. Obama has been gone for more than a year, and the war in Syria is far from ending. The Democratic Union Party (PYD) terror organization, the outlawed PKK's affiliate in Syria, which took Obama's blessing to fight Daesh with its People's Protection Units (YPG) militia, has long been giving another war against U.S.-ally Turkey to found a statelet in northern Syria.

Trump, on the other hand, has never said that his priority in Syria would be a humanitarian intervention to save civilians or help the millions of Syrian refugees who had to flee their homes. In fact, he has never spoken of humanitarian issues like Obama. At least he was not lying. He has not cared about Syrian lives and he has not promised anything. He just wanted to kill Daesh terrorists who might attack the United States and to keep refugees and other Muslims away from his country. He has been thinking that he inherited the Syria problem from Obama and he has had to deal with it. He even attacked Obama before he was elected, saying that his predecessor was the founder of Daesh.

Regarding Assad, in a presidential debate, he said: "I don't like him at all, but Assad is killing ISIS. Russia is killing ISIS and Iran is killing ISIS," referring to Daesh. I think that was a quite clear expression of his Syria policy. Long before he decided to run for president, in June 2013, he wrote on Twitter: "We should stay the hell out of Syria." Although he acted different than Obama and launched an attack on a Syrian regime airfield with 59 Tomahawk missiles when he learned that Assad used chemical weapons on rebel-held areas, it was just a one-time occurrence. Actually, he used the opportunity to catch the world's eyes and show that there was a new sheriff in town. When the Eastern Ghouta chemical attack happened, he warned Obama to stay out of Syria in his tweets, saying: "Remember, all these 'freedom fighters' in Syria want to fly planes into our buildings." There was no doubt that he saw the opposition fighters in Syria as wanna-be terrorists.

We also recall that during his campaign he said he would like to "get together with Russia" to "knock the hell out of ISIS" if he becomes the next U.S. president. Even though his keenness to cooperate with Russian President Vladimir Putin against Daesh in Syria has sparked outrage among many Democrats and Republicans, Trump did not bother to indicate that he thought Putin was a great man. I believe he would already have offered a relationship of cooperation that would benefit Moscow more than Washington in order to bomb the hell out of terrorists and withdraw from costly situations overseas if he did not have the Russia investigation problem. So, military experts' assessments about a U.S. withdrawal from Syria would be a win for Russia and something that Trump could ignore.

There were also signs that Trump was not happy with the Pentagon's strategy to continue supporting the YPG in Syria after Obama. When he first came to office, he asked the Pentagon to prepare a new plan to annihilate Daesh, but he was presented one that looked similar to Obama's. Above all, what the Pentagon did was offensive and demotivating. He was not happy about it, but he seemed to accept it as he was not welcomed in Washington and he had much bigger problems to solve.He also told President Recep Tayyip Erdoğan over a phone call in November 2017 that he had issued instructions that weapons delivered from the U.S. should not be provided to the YPG in Syria. The Pentagon made a quick statement contradicting Trump and continue to send weapons to the YPG. That was not only another tiring and blind response to an old NATO-ally like Turkey, but also a humiliating act against their own president.

There have been rumors since February that Trump was telling his top aides that he wanted to withdraw from Syria as soon as victory against Daesh is declared. And it was recently reported that he asked Saudi King Salman for $4 billion in stabilization aid to hasten a U.S. exit from Syria. The latest reports revealing that the Trump administration has frozen $200 million of U.S. funds for projects in places such as Raqqa signals his seriousness. Now that Raqqa was taken back and the Daesh threat is about to end, it looks like there is nothing left in Syria for Trump, who wants to get rid of excessive costs in the devastated country as soon as possible and get out of there for a long time.

But how will Israel, the closest Middle East ally of the U.S., and other regional states that come closer to Washington after Trump was elected, such as Saudi Arabia, the United Arab Emirates (UAE) and Egypt, react to Trump's intention? It is known that they are increasingly alarmed over Iran's expansion in Syria. In their eyes, the U.S. presence in Syria means blocking rising influence from Tehran and its allies like Hezbollah in the war-torn country.

Trump made the announcement in question during a speech on Thursday in Ohio, in which he said: "We're knocking the hell out of ISIS. We're coming out of Syria, like, very soon. Let the other people take care of it now." Now the question is who Trump means by "the other people." Is it Russia that Trump believes will be successful against wanna-be terrorists in Syria since the beginning of the civil war? Are they the Europeans like France, which still feels historic ties to the region and looks eager to fill the void the U.S. could leave behind, or the Saudis and/or Israelis, which after such a withdrawal would feel that they would have to do what they could not make the U.S. do? Or did he mean Turkey, which would anger those at the Pentagon who insist on staying in Syria, arguing that they have to continue to focus on the fight against Daesh and stick to their policy with further support to the YPG? Trump's vague announcement brings us an equation with multiple variables to solve.