US making S-400 deal a matter of independence for Turkey 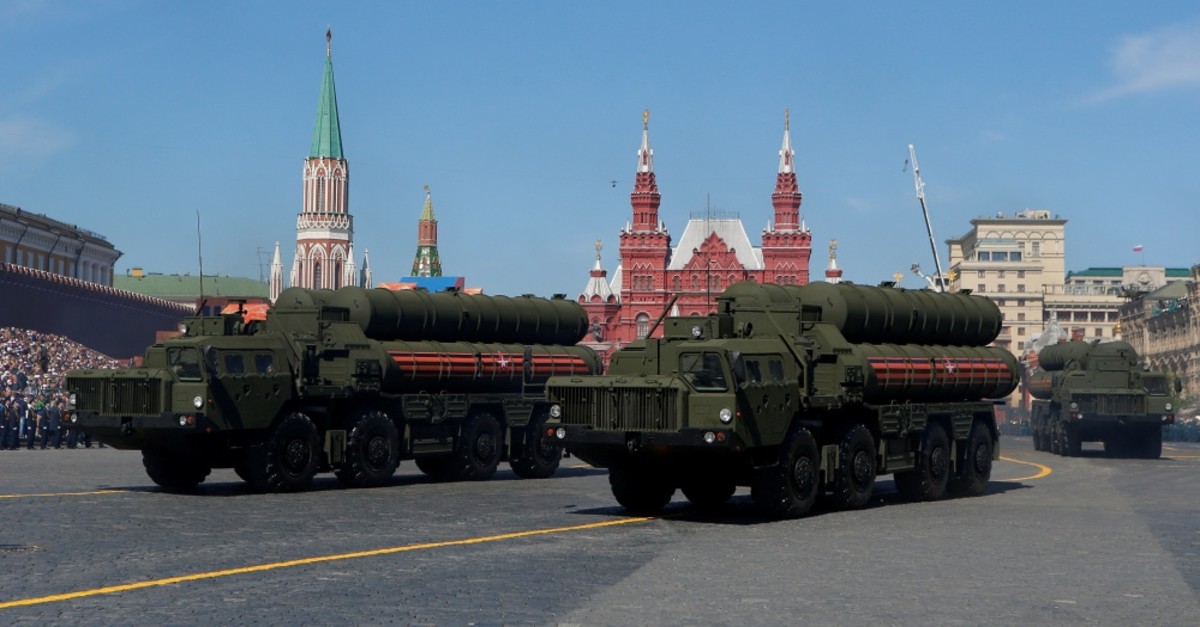 Russian servicemen drive S-400 missile air defence systems during the Victory Day parade, marking the 73rd anniversary of the victory over Nazi Germany in World War Two, at Red Square in Moscow, Russia, May 9, 2018.
by Merve Şebnem Oruç Jun 18, 2019 12:00 am

I don't know how many times you have read this sentence: Tensions between the U.S. and Turkey have reached a new peak.

We saw the most recent peak last week as Washington ridiculously increased its threats against Turkey with the Russian-made S-400 missile defense systems about to be delivered. U.S. Acting Secretary of Defense Patrick Shanahan outlined this month how Washington is planning to pull Turkey out of the F-35 fighter jet program and listed a number of threats in the Pentagon's most recent letter to Turkish Defense Minister Hulusi Akar unless Ankara changed course on its plans to buy the S-400 systems. Returning from an Asian summit in Tajikistan, President Recep Tayyip Erdoğan told reporters on the presidential plane: "We will not compromise on the S-400 systems. I always say this is not a small city-state; this is the Turkish Republic. We have already signed it. We have finished everything." Erdoğan also said Turkey is expecting answers on Turkey's "exclusion from the F-35 project for reasons that have no rational or legitimate basis," adding that Turkey was not only a customer but also a program partner in the F-35 project.

It is no surprise, of course, for those who know President Erdoğan have realized he does not like to be threatened and is a man of his word. So, as we have kept writing in this column, Turkey is committed to buying the S-400 defense systems no matter what threat comes from Washington. Congratulations, Washington. Now the purchase of the S-400 systems is an issue of sovereignty and independence for Turkey.

This might be a new peak in the tensions between Turkey and the U.S. in the last couple of years. However, this is only the latest chapter in a fraught history.

When ties began to improve

Turkey-U.S. relations started to evolve after the 2nd Cairo Conference in 1943 during World War II. The decision to build the Adana (İncirlik) Air Base was made then, but the construction did not begin until 1951.

In light of Soviet meddling in Turkish and Greek affairs, the Henry Truman administration passed the Truman Doctrine in 1947, which reoriented U.S. foreign policy, as Britain would no longer provide assistance to the Greek government in its civil war against the Greek Communist Party. According to Truman, a Communist Greece would endanger Turkey's stability, which would put the Middle East's stability on the line. In this regard, a clandestine stay-behind army, the Counter-Guerilla, the Turkish branch of Operation Gladio, was established as an initiative to protect Turkey from the Communist threat.

Turkey had participated with U.N. forces in the Korean War between 1950 and 1953 and joined NATO in 1952 with Greece. In 1954, Turkey and the U.S. signed a joint use agreement for Incirlik Air Base.

Adnan Menderes, the then-prime minister of Turkey, was neither anti-American nor against NATO. But Turkey had become too dependent on U.S. aid. When he was ousted and hanged by a military junta in 1960, he was about to visit Moscow to seek new financial alternatives, as the U.S., the NATO ally of Turkey, didn't let it launch industrial reforms and refused to even provide any loans.

Following the Bloody Christmas in Cyprus, the outbreak of violence against Turkish Cypriots on the night of Dec. 20, 1963, when the death toll amounted to a civil war, a crisis between Turkey and the U.S. erupted, as Washington preferred to stand behind Greece. Following U.S President Lyndon Johnson's letter in 1964 to Prime Minister İsmet İnönü, which could be summarized as, "If you intervene in Cyprus, you will be in trouble," İnönü said: "A new world order should be established with Turkey in it." Yet, he had to leave his post in 1965 amid a political crisis.

After the 1974 Cypriot coup staged by the Cypriot National Guard and the Greek military junta, Turkey rightfully sent its forces to Cyprus to protect Turkish Cypriots under the Treatment of Guarantee which was signed between the United Kingdom and Northern Ireland, the Kingdom of Greece and the Republic of Turkey, and the Republic of Cyprus.

Relations between Turkey and the U.S. were further damaged after Washington imposed an arms embargo on Turkey in 1975, taking a side in the tension between the two NATO allies, Turkey and Greece. It was also one of the fundamental reasons behind the rise of anti-American sentiment in Turkey.

What happened to Prime Minister Bülent Ecevit, whose popularity hit a high after Turkish intervention, was no different from his predecessors. Ecevit resigned from his post to go to early elections, but a government could not be formed for 200 days, which was followed by a long period of coalitions in Turkey and political chaos. Those years were marked by right-wing/left-wing conflicts, often on the scale of proxy wars between the U.S. and the Soviets, and followed by a military coup in 1980. When Turkish Army Chief Kenan Evren and his co-conspirators stepped in to take control, U.S. President Jimmy Carter was allegedly notified by a CIA officer with great news: "Our boys have done it!"

For the next three years, the Turkish Armed Forces ruled Turkey through the National Security Council. Fifty people were executed, a half million were arrested and hundreds died in prison before Turkey held elections.

Turgut Özal, who became prime minister in 1983, was an important figure in Turkey's transition to a neoliberal economic model. As one of the most influential leaders, he started economic reforms and launched a transformation process in the spheres of politics, culture and foreign affairs. He died of a suspicious heart attack in 1993 while he was president, leading some to suspect an assassination. He was seeking ways to make a sustainable peace to end the Kurdish-Turkish conflict and eliminate the outlawed PKK just before he died.

Eight different governments, seven of which were coalitions in the next nine years, then ruled Turkey passing through economic crises, instability and political chaos. Founded in 2001, the Justice and Development Party (AK Party) won a majority in the 2002 elections. With its successful liberal economic and socially conservative agenda, the AK Party and its charismatic leader Recep Tayyip Erdoğan won the next elections increasing its votes. Turkey was on the rise again, and this time it was big.

After the U.S. invasion of Iraq

Turkey-U.S. relations faced turbulence following the U.S. decision to invade Iraq. In January 2003, Turkey invited other countries in the region to the last chance meeting to urge Iraq to cooperate with the U.N. inspections and to avert a U.S.-led war. On March 1, 2003, Parliament rejected a proposal to allow more than 60,000 U.S. troops to operate from Turkish bases and ports in the event of the war, causing a great wave of anger in Washington. The U.S. troops attacked Turkish soldiers in Sulaymaniyah a couple of months later and took 11 of them hostage. Anti-American sentiment was on the rise once again in Turkey.

Ergenekon, the first of a series of investigation and trials, was launched in 2007. An alleged clandestine, secularist ultra-nationalist organization allegedly had members in the military and armed forces and was responsible for many acts of political violence in Turkey over the last 30 years. Ergenekon was listed as a terror organization and followed by the Sledgehammer trial, in which hundreds of soldiers including generals were arrested and dismissed. Many believed that Turkey was facing the dark chapters of the past or getting rid of Counter-Guerilla established under the Truman Doctrine and marginalized in the post-Cold War era. However, it was later understood that the documents for alleged crimes were fake, the evidence planted.

Police officers, prosecutors and judges loyal to Fetullah Gülen, the self-exiled leader of the Gülenist Terror Group (FETÖ) who has been living in the U.S. since 1999, were charged with plotting against the Turkish army. The U.S.' support for the many in Turkey saw investigations and trials for those listed above as revenge for the Turkish army's rejection of the proposal during the Iraq war. High-ranking soldiers who were put in jail during Sledgehammer trials were, in fact, dragging their feet concerning the U.S. demands, especially in the Eastern Mediterranean, according to their own remarks.

Turkey was harshly criticized when it started removing FETÖ members who infiltrated the Turkish state apparatus in 2013. The Gülenist network was accused of attempting a judiciary coup and building a parallel state. It was listed as a terror organization, which made American media crazy. The Turkish army was a closed book, and yet a Gülenist coup attempt was highly expected as Gülenist high-ranking soldiers replaced those dismissed during Ergenekon and the Sledgehammer trials. Fortunately, they failed when they attempted to do it on July 15, 2016.

The U.S. simply overlooked the Gülenists' war against Turkey. Even during the coup attempt, the Barack Obama administration waited to see what would happen. To be honest, I have no doubt that he crossed his fingers that night hoping that "our boys can do it" in the end. Even now, Washington still harbors Fetullah Gülen and his network on U.S. soil.

From its stance in the wake of the attempted coup to its support of the outlawed PKK's Syrian offshoot, the People's Protection Units (YPG), from the lack of keeping its promises in Syria to the never-ending threats from Washington, it looks like we are in a new phase of historical problems between Turkey and the U.S. While all those increases the lack of trust in Turkey toward the U.S., the anti-American sentiment of Turkish people keeps increasing, as well.

While Ankara is trying to open a channel for cooperation and put the problems in the past, Washington is trying Turkey's patience. In addition to that, while pressuring Ankara to kneel to American demands; it is actually pushing Turkey to turn to other superpowers, such as Russia or China. The U.S. should stop threatening Turkey and caring only for its own interests since Ankara is not the same capital it was a week ago. Opening Pandora's Box may hurt Turkey but at the end of the day, new world order will be established with Turkey in it.