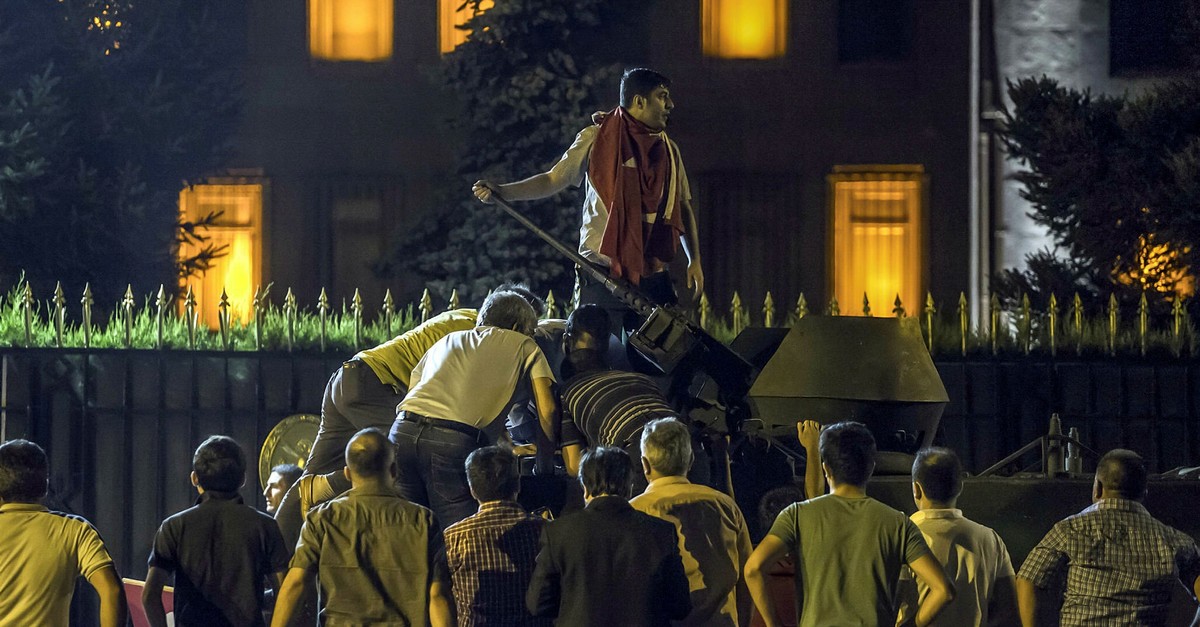 An anti-coup crowd climbs on a tank captured from FETu00d6 putschists outside the military headquarters in the capital Ankara during the night of the July 15 coup attempt, 2016.
by Merve Şebnem Oruç Jul 16, 2019 1:59 am

'This was not a coup, it's an invasion.' It was as if an enemy army had invaded Istanbul. I said to myself, 'That’s it, I’m gonna die in this square.' But I didn’t

Three years have passed since July 15, 2016, which started as a warm, calm, ordinary summer night, and then turned into hell and finally into victory. From time to time, I quote the story of the things I saw that night in my columns, but I have never written what I experienced. I've listened to hundreds of people's thrilling stories, the heroes of the night, the families of the martyrs and severely wounded Turks, and have tried to convey their stories to my readers. There were thousands of horrific details in the stories that reduced me to tears when I heard them. From Muğla to Cizre, Ankara to Istanbul, real life heroes were everywhere.

As a whole, July 15, 2016 was a story of overwhelming heroism that has changed the history of Turkey in the modern age. I haven't even considered my own story ever since then. Others spoke up and told me I had also accomplished great things, praise I didn't think I deserved. Nothing that happened that night, what I lived and witnessed, nor what I still feel, fit into a column, but today I will try to put it into words. After the evening prayer, Humanitarian Relief Foundation (IHH) President Bülent Yıldırım along with a few friends of ours met at a cafe near Vatan Boulevard in the Fatih district of Istanbul. We were chatting in the garden and drinking tea. One of our friends shared a tweet he saw with us: In front of Beylerbeyi Palace on the Anatolian side of Istanbul a group of soldiers had stopped police and took their guns.

That was a very strange occurrence. I wrote on social media from my account and asked my followers if any other unexpected things were happening in Istanbul.

A friend of mine called me and said he was stopped by the soldiers on the Bosporus Bridge while driving from the Anatolian side to the European side of Istanbul. When he asked what was happening, the soldier hit him in the face with the butt of his rifle.

Right after I hung up the phone, I saw the tweets of several journalists from Ankara, claiming that Turkish airspace was closed to military traffic. Since weird speculation and information tend to follow each other on social media, we started calling our own sources and contacts to find out what was really going on. Nobody knew anything. The first prediction was also bad; either there was a terrorist attack or… Nobody even wanted to utter the other possibility.

Just seconds after then-Prime Minister Binali Yıldırım's televised words confirmed there was a coup attempt, some children entered the garden of the cafe. They were sweating and yelling, "There are military tanks on the boulevard."

I remember that I wrote on social media, "The ones who are scared of you should become dogs like you." Then I called my family living in another city, informed them and said my goodbyes. I thought that it had really happened and that it had been successful. However, the last coup d'état that we saw was the Egyptian coup that we watched live on television. We all knew how it ended. I think that's why I thought the coup plotters had actually won. I was sure we were going to die that night since no one around me was the kind of person who would bow down to rifles and guns.

Bülent Yıldırım insisted on sending me home with the women and children. "Merve," he said, "It is very dangerous. You should come to our house, not even your place." Ignoring what he said, I started to walk down the street to the boulevard. I was trying to connect to the internet, but it was slow. I tried the VPN connection. It offended me that foreign media was saying it was a military coup. I didn't know anything yet, but I was sure it was the work of the Gülenist Terror Group (FETÖ) and that it was not a military coup. I called a friend abroad and said: "The internet is not working well in Turkey. This is not a military coup. This is the work of FETÖ, members of which infiltrated the army. You, people outside of Turkey, have to stop this lie." And I hung up the phone saying nothing else. I had reached the boulevard.

There were six or seven tanks in front of me. I remember my hands, feet and heart trembling. It was close to midnight, there were only 40-50 people on the street. It was around 11 p.m., and the terrorists in soldiers' uniforms were shouting at the people to stop approaching. I took a photo. I took a step. I took another photo. I got a little closer. When I started to share the photos I took on Twitter, I came across insults both in Turkish and English. They were alleging that I was lying; "Those are fake," they said.

I started recording videos to show what was happening in Istanbul. "Maybe if they hear Turkish words, they will believe that it is real," I thought. When I stepped in front of the first tank, my fear disappeared; the anger I felt for the darkness that threatened to kill us replaced it. They were on our streets, and they were trying to take our streets from us. I know I am a journalist, but at that moment, my country was at stake.

On one hand, I was shooting photos and videos, sharing them on social media and sending my consent to international media outlets so they could use the footage, and on the other hand, I was resisting with the people around me. The first crowd parked cars and buses horizontally on the road to stop the tanks from passing and went the police headquarters on the boulevard. There were two soldiers on top of the tank, one of them, who was shooting at us, looked to be of high rank. At that moment, I thought he was a Gülenist soldier, but he was more than that. The day after the failed coup attempt, we learned that the one who was wearing a high-rank officer uniform was Mithat Aynacı, a Gülenist police officer, who was suspended from duty in 2014 due to his ties to FETÖ. Amateur video showed that he jumped in one of the tanks on the road, changed his clothes inside and pretended to be a soldier.

During his interrogation, he said he was trying to negotiate with the soldiers, and he was taken hostage. But what kind of a hostage would wear a military uniform, sit on top of a tank acting like he was the one who was in charge and open fire at a crowd several times?

That night, in front of the tanks, I thought they would never leave, that they would kill us. I was shouting at them to go back, but I was hopeless. When I learned that President Recep Tayyip Erdoğan was on TV and called for the people to go to the streets, I turned and saw the crowd growing. At that moment, I got my courage back. My hope rose. "Maybe we can turn this around, maybe they can't win," I said to myself. I was so happy when we got all of the tanks from the Gülenists with the help of police, but my joy was short-lived.

I heard from the crowd that there had been many deaths and numerous wounded on the Bosporus Bridge and in Saraçhane Square, which is in front of Istanbul Metropolitan Municipality. The fastest place I could reach was Saraçhane. It was 2:30 a.m. when I arrived. When we arrived at Fatih Mosque, jets were flying above us, and sounds of what we thought were bombs exploding made me feel that the worst part was starting. I remember people walking away from the square saying: "Hey, don't go there. It's a bloodbath."

When I reached the square, I could hear gunfire, sirens and prayers. People were carrying the wounded, young men covered in blood. I remember that I thought, "This was not a coup, it's an invasion." It was as if an army of an enemy had invaded Istanbul. I said to myself, "That's it, I am gonna die in this square." But I didn't.

In the morning, I went to my newspaper and then to the TRT building in Ulus, which was still under occupation. I returned home at 10 a.m. I was out for a cup of tea and looked around; what had happened? With my last bit of strength, I turned the key, walked in and collapsed on the floor. What a night it was... What a tragedy it was… I cried and I cried.