Can the G7 survive with its current vision? Optimists say no 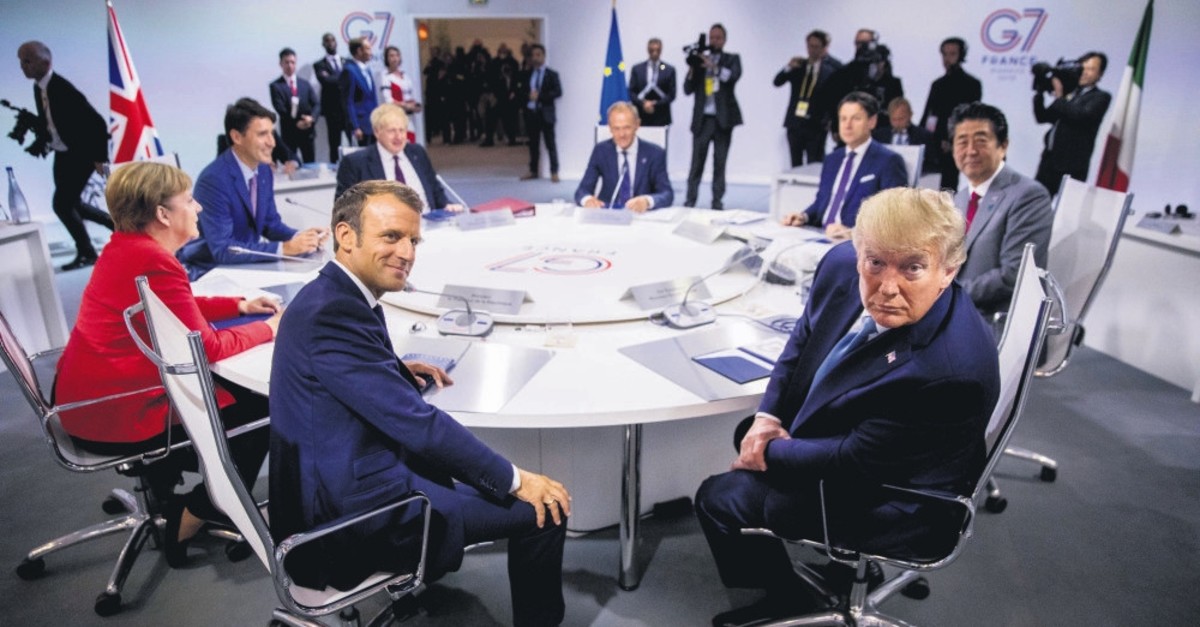 Unless the G7 members stop the hemorrhage of power by abolishing the organization, they will continue to lose prestige and respect, as they have over the last three years

Who can forget the viral photo of the world leaders standing over the seated U.S. President Donald Trump at the 2018 G7 summit in Quebec, Canada?

It was taken by the German cabinet's official photographer. German Chancellor Angela Merkel's office posted the picture on Instagram with these words: "Day two of the G7 summit in Canada: spontaneous meeting between two working sessions."

Social media users were quick to resemble the image to almost everything, such as a Renaissance picture or a scene from "The Apprentice."

But also, the drama around the 2018 G7 meeting is hard to forget. A war of words between the U.S. and other G7 members erupted. It was easily understood when you took a look at the picture I mentioned above.

The 2018 G7 meeting was in the wake of disputes over the U.S. imposing unilateral tariffs on the EU countries, Trump's trade war and accusations over the Russian involvement in Trump's election campaign.

Even before the summit opened, French President Emmanuel Macron said the other six members of the group could sign an agreement without the participation of the U.S. if necessary.

President Trump threatened to leave the summit early in 2018 and called for Russia to be reinstated to the G7 – Russia was tossed out in 2014 after it annexed Crimea. And leave early he did.

He also withdrew his signature from the 2018 communique, a lengthy joint statement signed during the inaugural G7 summit in Rambouillet, France, in 1975, and complained that Canadian Prime Minister Justin Trudeau, the host of the summit, despised him, tweeting that he "acts hurt when called out."

In a news conference after the summit, the Canadian leader reasserted his opposition to the U.S. tariffs and said that "Canadians are polite and reasonable, but we will also not be pushed around."

Reactions over the reaction

Other G7 partners were also stunned by Trump's reaction and supported the communique.

Macron said international cooperation could not be "dictated by fits of anger and throwaway remarks."

"Let's be serious and worthy of our people," the French presidency stated. "We make commitments and stick to them."

Merkel, on the other hand, said his decision to reject a joint communique was "sobering" and "depressing."

Trump also struck a sour note in the 2017 meeting in Italy over the climate change passage in the summit's final statement. The G7 leaders were in Taormina, Italy, and they failed to bridge differences over climate change.

According to their final communique, the U.S. was in the process of reviewing its policies on climate change, and thus was not in a position to join other countries in committing to the Paris Agreement.

Trump, who previously called global warming a "hoax," tweeted that he would make a decision next week on whether to back the Paris Agreement, which he did in a couple of days.

Merkel was quick to comment after the G7 summit. "The entire discussion about climate was very difficult, if not to say very dissatisfying. There are no indications whether the U.S. will stay in the Paris Agreement or not," she stated.

However, what Merkel said when she was back home was an enormous disclosure of the status of the trans-Atlantic friendship. And, it was formerly seen that the U.S. and Europe forge alliances on almost everything from the international politics and defense to trade, regulations and culture.

Stopping at a beer tent during a political rally in Munich, she declared a new chapter in the U.S.-European relations after a contentious meeting with Trump, saying that Europeans "must really take our fate into our own hands."

Merkel did not mention Trump by name, but it was obvious he was the one who triggered her comments. She said, "The times in which we can fully count on others are somewhat over, as I have experienced in the past few days."

Merkel was also thinking of the U.K. distancing itself from Europe after Brexit.

"Of course, we need to have friendly relations with the U.S. and with the U.K., and with other neighbors, including Russia," she said, but added, "We have to fight for our own future ourselves."

As those all happened in the last two years, many couldn't help but asked what Trump would do in 2019 and felt worried about the G7's future.

The G7 leaders met last Saturday for a two-day summit in the southern French city of Biarritz. Macron was the host and asked that the meeting focus on inequality, biodiversity and climate.

However, after Trump's remarks, the financial markets went mad over the weekend, raising tariffs and making threats to force American companies to stop locating production in China. Trump was at the center stage in the G7 summit and made headlines on many issues ranging from trade to supposedly wanting to stop hurricanes with nuclear weapons so they would not hit the U.S. again.

Even though Trump offered an olive branch to China on Monday after intense days over trade, opening the door to diplomacy on Iran and trying to ease tensions on the last day of the G7 summit, his divergence on key points, particularly on trade, climate and Russia, were opposite a consortium of the G7 leaders.

At least, for one day, everyone was on their best behavior, kissing each other, smiling and willing to present a show of congeniality when the cameras were on. But when they returned home, their differences appeared to have sharpened, and many agreements seemed further out of reach.

'We got along great'

After Trump torpedoed the last two G7 summits with his behavior, other world leaders seemed determined to play along this year to keep drama out of the headlines, but it didn't work.

For all that, in his concluding news conference, Trump said the meeting ended without major breakthroughs. His takeaway message from the 2019 G7 summit in France was "unity."

"If there was any word for this particular meeting of seven very important countries, it was unity," Trump said at a news conference Monday, closing out the two-day gathering.

Actually, during the whole summit, Trump portrayed the summit as if it was something like a festival.

Only the "Fake and Disgusting News" would say that his relations with the other leaders meeting were "very tense," he also tweeted about the summit, when in fact, they were "getting along very well."

He insisted on that his counterparts were coming forward and agreeing with him on that it was a good idea to take Russia to the group back. He added that he got support for his trade dispute with China and a lunch he had with Macron was the best until now with his French counterpart.

Maybe that was because he is working on cooling down the markets as he avoids a recession. But Trump's version of events does not reflect the truth.

Asked to name the other leaders who was close to accept letting Russia back in, he hesitated. "I could, but I don't think it's necessary," he said.

As is known, that can't happen unless all members agree and they are unlikely to do it, unless Russia reverses its annexation of Ukraine. What is more, Russia hadn't even asked to be readmitted to the G7, according to reports.

In addition to that, Iran's Foreign Minister Jawad Zarif made a surprise visit to discuss the 2015 nuclear deal, but Trump declined to meet with him.

He also claimed he knew ahead of time and gave Macron permission for Iran to attend. But, some Trump aides said early in the day they were caught unaware of –and furious over – the French government's decision to invite Zarif, according to reports.

So, once again, Trump has disrupted the image of the G7 summit, even though he didn't intend to.

It can be said the G7 leaders no longer want to attend the summit, as they feel embarrassed. They depicted themselves united and coordinated in shared Western values until Trump came along, but they can't anymore. They lost that image in the last three summits, and it looks like they will not be able to address the challenges of the new world collectively, at least until Trump leaves office.

They are right to feel worried about the future of the G7 after so many internal divisions. But the more diversified forum, the G20, where more than seven countries find a stage to talk, is more democratic than the G7.

Especially since China and other emerging global powers now exist, it is obvious that the G7 talks have lost importance, as the group was founded in 1975 as a club of the wealthiest countries.

In short, the G7 lacks relevance today in its current formulation. However, on the other hand, the G20 represents about 80% of global GDP and two-thirds of the world's population. So maybe there is no reason for the G7 to exist anymore.

It's not only about Trump. It is also old and outmoded. In addition to that, if they don't stop the hemorrhage of power by abolishing the G7, the member countries will continue to lose prestige and respect, as they have over the last three years.