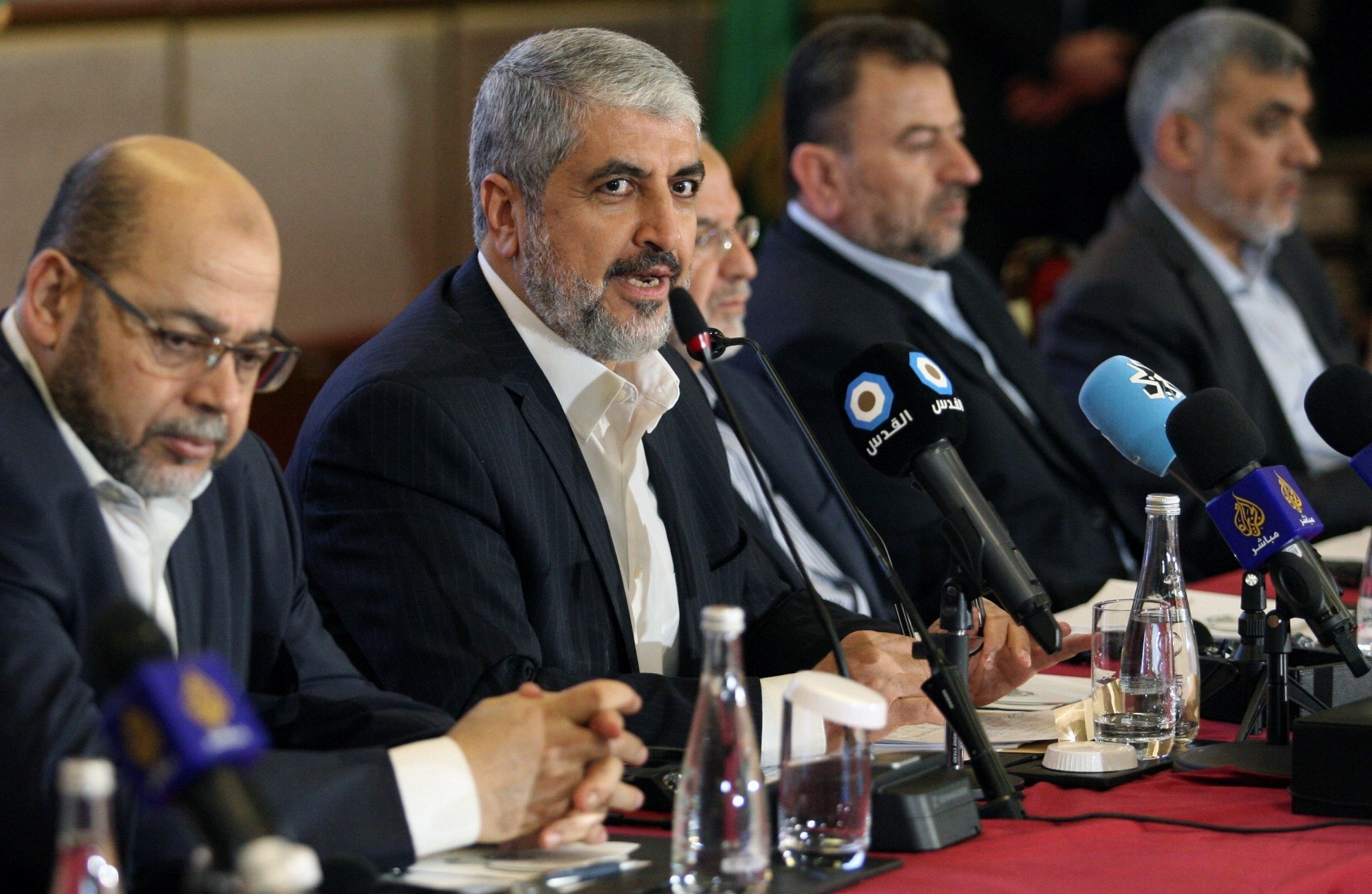 The much-debated policy declaration will for sure help Hamas take a more moderate form, being in the center politics. If it continues making such rational moves in the upcoming period, it's certain the world will see a quite different Palestine and Israel

No one can claim that the Middle East was a region of peace and bliss in the past. Still, recent years have seen a perfect storm of mayhem: A coup in Egypt, an expansionist Iran, extremist Daesh wreaking havoc all across the region, civil war in Syria and Iraq collapsing on itself. The cards are constantly reshuffled and alliances and actors are constantly shifting.

One thing has remained the same throughout this upheaval: The Israeli-Palestinian conflict. The first thing that comes to mind when we think about the city of Jerusalem, holy to all three Abrahamic religions, is the Palestinian issue, which brings to mind the blockade on the Gaza Strip and the occupied territories.

However, one should note that there appears to be some encouraging developments emanating from the region. The seemingly unsurmountable divide between Fatah and Hamas seems to be narrowing at an incredible pace.

Hamas, as an Islamic resistance movement, had shown its will to engage in a political process by entering the 2006 general elections for Palestinian parliament. A group that had defined itself as religious, Hamas won the majority of seats and became an integral part of Palestinian politics. Initially, when it was first founded at a refugee camp in the Gaza Strip, it had defined itself as a religious movement representing not only Palestinians, but Muslims as a whole. In the following decades, it transformed itself into a national movement that is a better representative of the will and desires of Palestinians than Fatah.

In time, it adopted some of Fatah's principles, with the transformation culminating in Khaled Mashal, the exiled leader of Hamas, releasing a new policy document in Doha, Qatar, in May 2017. As he did not base this document on the founding manifesto or make corrections to it, the new declaration was not merged with, but actually superseded, the previous one.

With this new defining transformation of the movement, Hamas was to strengthen its place within Palestinian politics while breaking through the physical and emotional blockade of Gaza. The founding objective of destroying Israel or depicting themselves as an affiliate of the Muslim Brotherhood (Ikhwan) found no place in the new policy vision announced in Doha. Nowhere in the new policy document are anti-Jewish sentiments expressed.

Hamas's avowed ties to the Muslim Brotherhood were always criticized by the armed resistance movement, the Palestinian Liberation Organization (PLO). Israel, too, portrayed the PLO as the "good enemy" in opposition to Hamas. Even though Hamas's rhetoric echoed much of what the PLO was saying, the PLO had removed any overt calls for armed resistance to achieve its objectives. The PLO defined itself as a secular movement while Hamas was openly Islamic. No matter what either movement stood for and said, they failed to stem Israel's expansion and neither could they secure an independent state. At the end of the day, it was Hamas that the West recognized as a terrorist group.

Hamas's latest move can be seen as an effort to gain international legitimacy.

During the Islamic holy month of Ramadan in 2014, Israeli bombs that rained down on Gaza killed 1,450 civilians, half of them children, according to U.N. figures. Gazans, however, argue that the number of dead is more than double this figure. Hamas's response, with decrepit missiles, killed six Israelis. The international community, the academic world and the media still see this as an Israel-Gaza war, and not a one-sided massacre, while Hamas is branded a terrorist group that kills civilians.

In its original founding statement, Hamas openly acknowledged its loyalty to the Muslim Brotherhood, whose leadership and grassroots have been decimated since the coup in Egypt led by Abdel-Fattah el-Sissi in 2013. Many members have fled overseas to escape persecution, scattering around the world. The general consensus is that the brotherhood has lost its Egyptian stronghold. It is obvious that Egypt will act as a Western proxy in the region for the foreseeable future. Under these conditions, it is impossible for Turkey to cooperate with the Egyptian regime to seek solutions to many of the regions problems. Hamas's declaration that it no longer has any ties to the Muslim Brotherhood was interpreted by many around the world that the group wants to establish ties with Sissi as a way to break the stranglehold on Gaza. Rather than accepting this analysis at face value, one needs to reassess the historical evolution of Hamas.

Ever since its establishment in 1988, its close ties to the brotherhood has been one of the main critiques levied against Hamas. Over time, Hamas transformed its focal point from being an Islamic movement to the Palestinian issue. It is well known that the group drew up a draft of the policy document that did not mention the Muslim Brotherhood even before the 2013 coup in Egypt. The coup and the violence resulting from it may even have postponed the release of the document. On the other hand, the Muslim Brotherhood, which is under siege in Egypt and faces being declared a terrorist group by the U.S., can no longer act as a source of support for anyone.

ISRAEL AND IRAN: BETWEEN A ROCK AND A HARD PLACE

The interests of Iran and Hamas previously coincided only in antagonizing Israel. However, this match necessitates perpetual hostility toward Israel on every platform and provides no international legitimacy to Hamas. Moreover, Iran's expansionist and sectarian strategy in the region has received serious backlash from Arab countries. While Sunni Arab countries such as Saudi Arabia and Qatar may not agree to an alliance with Israel, they can form a common front against Iran. Mashal's decision to present Hamas's policy document in Qatar should not be seen as a simple coincidence.

TURKEY EXPORTING POLITICS TO THE REGION

The region's stance on the Palestinian issue has been shaped by Israel's occupation of and settlement expansion into the West Bank. It was impossible for Hamas not to redefine itself accordingly, becoming a legitimate factor in the resolution of the problem.

After its election victory in 2006, the West refused to acknowledge the results, rejecting Hamas as a genuine political actor in the region. Turkey objected to the treatment accorded to Hamas, constantly calling on the international community to recognize the group as a legitimate part of Palestinian politics.

There was serious criticism directed at Turkey when Mashal came to Ankara soon after Hamas's election victory in 2006 to meet with members of the ruling Justice and Development Party (AK Party). No one can doubt that the contacts between the two political parties resulted not in Turkey's move to an extremist agenda, but to Hamas's adoption of a more moderate political tone. The recently announced policy document does not include any recognition of Israel. Nor does it have any call for the destruction of the country. In other words, the group's objective now is to secure a homeland based on the pre-1967 borders. Hamas's document shows that its outlook toward Jews has changed and that its struggle will be against expansionist Zionism instead. Hamas is plainly moving toward a more internationally accepted vis-a-vis Israel.

However, Turkey's relationship with Hamas was viewed by Western interlocutors and the government's opponents within the country as a dangerous move that would marginalize Turkey. Ridiculous remarks like that Turkey was adopting Hamas's rhetoric disparaged the persuasiveness of a strong country like Turkey while ignoring international dynamics shaping the region.Turkey's strength of persuasion is a key factor behind Hamas's evident desire to gain international legitimacy. A politically isolated Hamas has realized that lacking an international platform to make its arguments while engaging in hateful rhetoric allows Israel to portray its disproportionate response to a few missiles missing their targets as just and thousands of dead Gazans as collateral damage. In this respect, it is important for Hamas to utilize the PLO. Hamas, which controls the Gaza Strip, can negotiate with Fatah and recognize the PLO as an umbrella organization. This would increase support for Hamas among Palestinians while enhancing efforts to lift the blockade on Gaza.

Everyone knows that there is a crisis of confidence facing Palestinian President Mahmoud Abbas's continued leadership of the PLO. He is a poor representative of the Palestinian people and their interests. Any rapprochement between Fatah and Hamas might boost the chances of a successful resumption of peace talks.

There are some who understandably see the transformation of Hamas as a result of the worsening grievances of the people of Gaza. Gazans want to live in houses with electricity and water, get treated at functioning hospitals and send their children to school. Still, they do not see Hamas as the principle culprit behind the current miserable state of affairs. It is the Western leaders who refuse to recognize Hamas that blame the group for Gazans' miseries, not the Israeli blockade that continues with tacit Egyptian backing.

Since 1996, Israel has assassinated many Hamas leaders. Mashal's continued evasion of countless assassination attempts alone gives hope to the people he represents.

WHAT WILL THE FUTURE OF THE MOVEMENT BE?

The Israeli response to Hamas's new policy document was as predictable as it was unfortunate. The Israeli government legitimizes its own indiscriminate murders and expansion into the occupied territories through Hamas's threats and the deaths of civilians. A pragmatic Hamas ready to engage politically is the last thing Israel wants. The Israeli Prime Ministry's statement in response to Hamas's policy document was to describe it as lies to the world.However, from now on, neither Israel nor Abbas will be able to argue that Hamas is an extremist group incapable of compromise in order not to lift the Gaza blockade or engage in negotiations. This policy document pushes Hamas's stance from the marginal to the center. It has dramatically redefined its resistance. Hamas's attacks on civilians should be seen as acts of desperation by people with no hope. And Palestinians are already paying the price for such acts of desperation.

Can the Palestinian conflict be resolved through new measures or alliances? What will the Western response to Hamas's transformation be? Will U.S. President Donald Trump be the one that will finally resolve the issue, which has evaded all of his predecessors? We can only wait and see. However, we should acknowledge that Hamas is a group that wants to become a part of the international community, not an armed group out to conduct individual attacks against Israelis.

Hamas spokesman Fawzi Barhoum has said, "To the world, our message is: Hamas is not radical. We are a pragmatic and civilized movement. We do not hate the Jews. We only fight who occupies our lands and kills our people."

The policy statement by Mashal, who is expected to be replaced by Ismail Haniyeh in an election later this year, embodies an incredible transformation of the group. The AK Party itself was the embodiment of a transformation that put behind the National Vision of its predecessors, pushing a more modern, dynamic and democratic outlook. Still, the AK Party had faced innumerable obstacles and persecution, many more than the past National Vision governments faced.

It is no wonder it was the AK Party that saw Hamas's potential to move toward a more rational outlook and worked to prevent the group from harming itself. It will be to the benefit of Hamas and Palestinians in general if the group rolled with the punches to push forward its agenda based on rational policies and do its utmost to be on the side of justice and legitimacy.