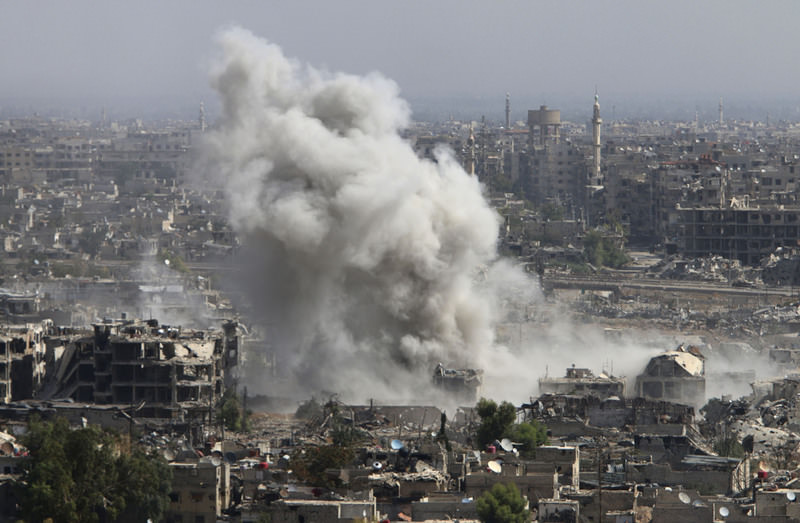 Backed by Russian airstrikes, the Syrian army has launched an offensive in the central and northwestern regions of Syria.
by Nagehan Alçı
Oct 21, 2015 12:00 am

Turkey strongly insists that the chaos and ongoing refugee crisis cannot change with the Assad regime and U.S. support for the PYD is unacceptable

Turkey is going through a very rough time in a very challenging region. As such, it is impossible for Turkey not to be affected by the current chaos as two counties in the Middle East are falling apart and yet another is on the verge of turbulence. This is because the dynamics and actors that are disintegrating the Middle East are also striving to destabilize Turkey. Unfortunately, we see the consequences of such efforts in a rather sad way. On the one hand, Turkey is fighting the PKK, and on the other, as an important part of the international coalition, it struggles with the Islamic State of Iraq and al-Sham (ISIS), which originated from the Middle East. Despite all this and the fact that the perpetrators of last week's bombing in Ankara have turned out to be ISIS-linked suicide bombers, some circles are still trying to present it as if there is affinity between Ankara and ISIS.

Well, what is the truth? What does Ankara's foreign policy aim for? Does Ankara lean toward a transition period with President Bashar Assad in Syria? What is Ankara's position on ISIS? Along with a group of journalists, I asked an important source these critical questions on Monday and learned the positions of international actors and what kind of steps have been taken on a number of issues. Here is our conversation and messages that can be summarized as the main logic of Ankara's policy for Syria:

"Since the beginning, Turkey has strived for a political solution in Syria. This means a solution that is compatible with the historic and social background. Assad cannot rule Syria, not because he is Assad or from the Baath Party, but because he fails to rule his public with fear as he did in the past. Today, Assad is being held in power by others. Previously, arms and ammunition aid was provided, but they entered [Syria] to provide support to Assad with their military presence when the U.S. gave up taking steps even though red lines were violated in 2013. Hezbollah and Shiite militias from Iraq and Afghanistan entered. Then former al-Qaida members were released from prison. They were allowed to pass to Deir ez-Zor and it decided to use an organization, which threatened the whole of the world, against organizations that threatened Assad alone. Someone very close to [Russian President Vladimir] Putin confirmed this, saying that there could be such cooperation but there was not an organic bond."

As for today, with Russia's official involvement in the game, the question of whether Assad would be permanent has become a topical issue in a clearer way. President Recep Tayyip Erdoğan's statement, which means that a transition period with Assad would be possible, has aroused the question of whether Ankara has changed its mind about Assad. Concerning this, the source said the anti-ISIS coalition, which includes 10 countries along with Turkey, is preparing a solution plan for Syria. According to the plan, Assad will go through a transition period of six months in which all of his authority will be transferred to transitional bodies and he will withdraw after remaining in power as a symbolic president for the six-month period. Reportedly U.S. President Barack Obama conveyed this plan to Putin on behalf of coalition countries during U.N. meetings on Sept. 28. So what is the result? There are no signs yet indicating that Russia has received the message. On the contrary, it entered Syria two days after this message was supposedly given.

Once again, we asked the basic question of what kind of a path would lead to success when viewed from Ankara's point of view. The source said Turkey, along with coalition countries, tried to prevent ISIS from replacing the Syrian opposition and supported the Free Syrian Army (FSA) against Assad. The FSA managed to stop ISIS on many occasions. Concerning the now defunct train-and-equip program, the source said that it was already born dead as those who joined the program were forced to sign agreements not to fight against any other forces apart from ISIS.

There are many points to quote, but let me summarize that Ankara insists on its thesis that the picture in Syria cannot change with Assad. It underlines that it will never compromise on the U.S.'s support for the Democratic Union Party (PYD). The main problem is that the U.S. just watches what happens in line with Obama's strategy. This is why it is not realistic to expect a considerable change in this picture without the change of the U.S. administration.
Last Update: Oct 21, 2015 2:11 am