Turkmenistan visit and balances in the Middle East 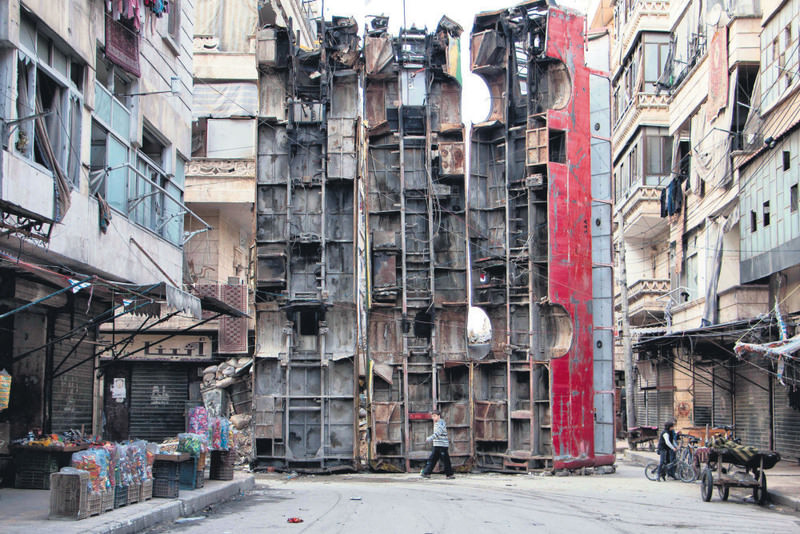 A young boy walks past a makeshift barricade made of bus scraps to obstruct the view of Russian-backed Assad regime's snipers and to keep people safe
by Nagehan Alçı Dec 16, 2015 12:00 am

Moscow, which is trying to take advantage of the existing oil, and the Assad regime and Tehran, which are following sectarian policies, have waged a war against Ankara for insisting on denying them their demands

While the tension caused by Turkey downing the Russian jet is still ongoing and the unit of Turkish troops deployed to the Bashiqa Camp is being regarded as a crisis by the Baghdad government, with the influence of Tehran, Turkey has paid a visit to Turkmenistan's capital city of Ashgabat with President Recep Tayyip Erdoğan and a delegation which accompanied him. This visit was originally planned before the suicide bombings in the Ankara attacks but had to be delayed several times due to the negative developments. The visit was held on Dec. 12, since this date is celebrated annually in Turkmenistan as a state holiday seeing as the United Nations recognized the status of permanent neutrality of Turkmenistan on that day.

President Erdoğan was the most important guest at the international celebration, which enjoyed broad participation. Of course, the questions such as whether Turkmenistan has the power to remain neutral and independent and whether it is possible to act as if Russia's hegemony does not exist are different subjects of discussion. But, it can be said that Turkmenistan boasts the fourth richest gas reserves in the world and the global energy balances might change if the country has the liberty of processing and exporting its own resources. Russia used to purchase 40 billion cubic meters of gas from Turkmenistan, but now this amount has decreased to 4 billion cubic meters. The country has laid the groundwork of forming a pipeline that would extend to India just after the visit.

Although energy is one of the most crucial agenda topics, the Middle East crisis experienced in Syria and Russia's insistence on sustaining tension, is generally met with anxiety in the region. In our conversation during the flight, President Erdoğan expressed that the leaders of other countries want to do their best to overcome the tension. As a matter of fact, Erdoğan's approach effectively demonstrates that Turkey does not side with tension. Erdoğan said, "It is unfortunate and thought-provoking that a warplane, of which it's nationality was unidentified, violated the airspace, and such an incident happened as a result of the fact that the plane did not heed the warnings. A mistake of that kind was made regarding our realm of sovereignty. Who made this mistake? Of course, it was not done by the administrators. The pilots ignored or were unable to hear the warning. After all, the burden of a mistake done by a pilot should not be laid on the relations between the two countries, especially the strategic relations." This approach means that Erdoğan downgrades the source of the crisis, which helps Russia to recover its disrupted reputation in some way.

On the other hand, the tension Baghdad has created due to the Turkish troops at the Bashiqa Camp in Iraq naturally cannot be thought of as an individual entity separate from the crisis with Russia. Throughout the visit, I tried to grasp the reflections on of this issue. Turkey has suspended the deployment of new military units in to Bashiqa to avert the continuity of tensions and a part of the troops in the camp might be withdrawn. However, the main aspect that disturbing Turkey is that it has been represented as an occupier in the issue. During the flight, Erdoğan also touched upon this point and said: "During a visit he paid to Turkey at the end of

2014, al-Abadi [Iraqi Prime Minister Haider] demanded our military and police officers to train their officers. Upon this demand, our delegation went to the region and specified the place, and our forces started to deploy there. The current delegation in the region went there not as combat troops, but as training units. Resorting to the U.N. Security Council is thought provoking. The first step was taken by Russia, which was rejected. This time, Iraq itself resorted to such a way. The position of Turkey in the region does not resemble the position of any other country. Our delegation is required to stay there in the fight against DAESH and other terrorist organizations. The threat has not left us yet."

Following the jet crisis, the Moscow-Tehran-Assad- Damascus alliance led by Russia has been acting independently from Turkey's red lines by almost challenging Turkey in order to enable Russia to realize its goals in Syria. The alliance also aims to reinforce the influence of the Shiites in the Middle East. Confronted with this, Ankara insistently emphasizes the importance of avoiding sectarian-based policies and discarding the dictator, Syrian President Bashar Assad, from the equation. The equation is really very complex and hard to resolve, and the Western bloc opposing Russia cannot be said to have so many red lines, except for preventing Russia's empowerment and dominance.
Last Update: Dec 16, 2015 1:35 am
RELATED TOPICS