Possible Iran war in Middle East would hurt all of humanity 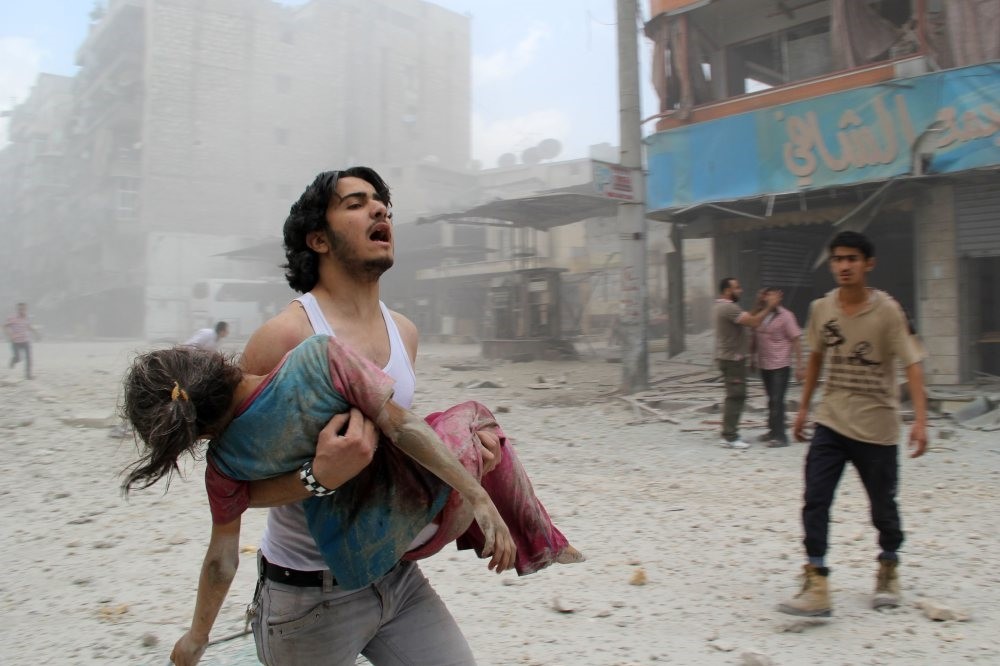 A man carrying a young girl injured in a reported barrel-bomb attack by Assad regime forces in the Kallaseh district in Aleppo, north Syria, June 3, 2014.
by Nagehan Alçı Feb 08, 2017 12:00 am

If the current tension between Washington and Tehran leads to war, the Middle East will turn into a total battle field, causing great tragedy for all of humanity

Have newly inaugurated U.S. President Donald Trump's scandalous decisions provoked a wave of serious questions about where the world is heading? Everyone is asking this question following the public reaction across the U.S. triggered by Trump's explicitly anti-democratic decisions to bring in visa bans and restrictions on immigrants that contradict human rights. The arguments I suggested in last week's article have been verified with the new developments. The Islamophobic policies that have been covertly maintained since the 9/11 attacks have evolved into overt policies now Trump has appeared on the scene. Will this be enough to cause an uprising against discriminatory policies and function as a means for Muslims to express what they could not tell the West for years? It is evident that a mobilization has begun, but it is not yet certain whether it will yield any results.

We do not yet know the consequences of Trump's radical and fascistic discourse and decisions. A mobilization of the opposition may arise as a positive outcome of his decisions. The only problem is that first we are likely to bear witness to the negative and grave consequences of his decisions. A possible war between the U.S. and Iran is one of the major risks. We are confronted with a U.S. president who is inclined toward offensive and aggressive policies, one who is unwilling to follow concepts such as having balanced policies, and one who does not seem to have any interest in reconciliation. Barack Obama managed to break the ice with Iran and just as his Iran policy started to yield results, the next president created the very real risk of instigating another war in the Middle East. The concerns are growing given that Iran is also among the list of countries whose citizens are banned from entering the U.S. On top of that, the U.S. Treasury Department issued new sanctions regarding 13 people and 12 companies on the grounds that they contribute to Iran's ballistic missile program.

The Trump administration is basically threatening the country using Iran's recent ballistic missile test as a basis. Tehran is being cautious for now. The Iranians announced that they would never use the weapons against anyone unless in self-defense, but it has already been proven that the U.S. is a master of finding imaginary weapons in order to kick off a war. Also, following Trump's National Security Adviser Michael Flynn's statement suggesting that the Trump administration would no longer tolerate Iranian provocations that threaten the interests of the U.S., Iran announced that it would introduce legal restrictions on U.S.-based persons and institutions that aid regional terrorist groups, which signalizes that Tehran would possibly adopt a tit-for-tat approach.

So what will happen? What would a possible U.S.-Iran war lead to, especially considering the chaos and uncertainty that is ongoing in Syria? Will it grow into a world war in the strictest sense if Iran turns into a battlefield while the Middle East continues with the great power struggle in Syria?

Of course, it would inevitably lead to a world war. Iran has recently gained prominence in the region due to former President Barack Obama's policies that ended up threatening the entire region. This situation could be also undermine Turkey. However, regarding a possible Iran war as a means to solidify Turkey's power and reduce Shiite influence would mean overlooking the impending threat. If the Middle East turns into a giant battlefield, humanity itself will be victimized. Plus, such a large-scale war would of course spillover into Turkey. In such a scenario, fuel would be thrown on an Islamic world that has long been in flames.
RELATED TOPICS