What happens after Operation Euphrates Shield? 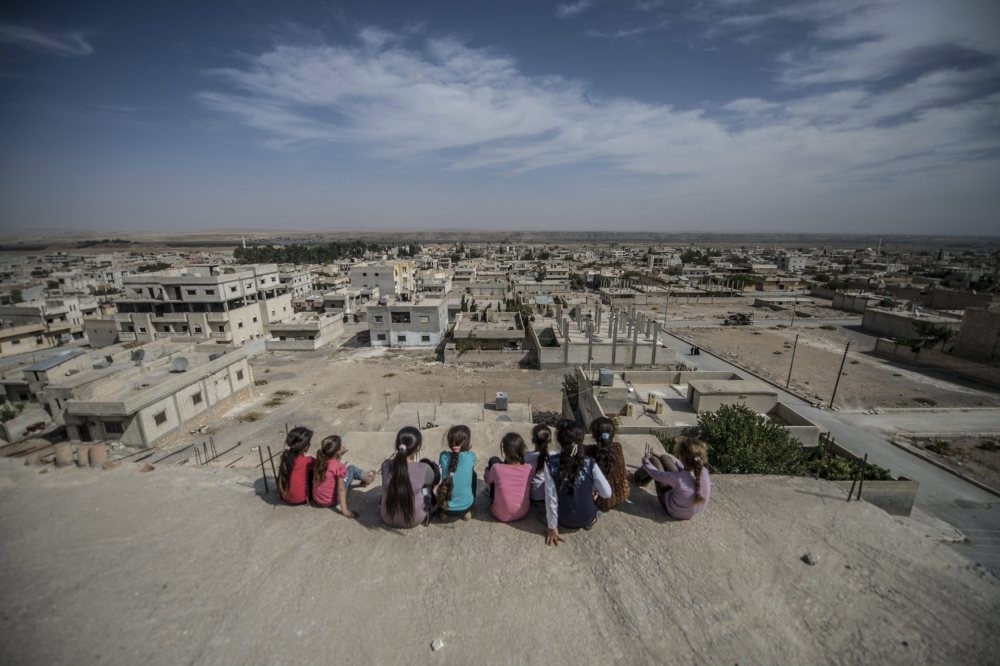 Syrians gazing at Jarablus after its liberation from Daesh terrorists by Turkish forces and FSA as part of Op. Euphrates Shield, which was officially ended on March 29, 2017, killing more than 2,500 Daesh terrorists along with 500 YPG/PYD terrorists.
by Nagehan Alçı Apr 05, 2017 12:00 am

Operation Euphrates Shield was the most concrete and successful move to clear the Syrian towns from terrorists, but there is still more time to talk about a complete end to the chronic war

It was announced last week that Operation Euphrates Shield, which kicked off on Aug. 24, 2016, had come to an end. The operation had two main goals: The first goal was to clear off the security threat posed by Daesh, and the second goal was to hinder the outlawed PKK's Syrian offshoot, the Democratic Union Party's (PYD) plans to seize the Azez-Jarablus region by uniting the Afrin and Kobani cantons. Both goals have been undoubtedly accomplished.

The first step of the operation, namely the Jarablus offensive, yielded successful results in a very short time. Jarablus was purged from Daesh militants thanks to the offensive. With this move, the West could clearly see that the intervention of the Turkish Armed Forces (TSK) in the anti-Daesh fight accomplished far more effective results than the PYD could ever achieve.

The al-Bab offensive was the next stage of the operation. Al-Bab, which occupies only a small territory but constituted the second important Daesh center within Syria, presented a big challenge since the terrorist group's deployments were intense in the city. Despite that, the TSK liberated the city by annihilating thousands of terrorists as part of a serious fight that lasted for a couple of months with the cooperation of Free Syrian Army (FSA) forces. Now, locals of the city are embarking on their return journey.

Despite all of this, the PYD is still considered an ally of Russia and the U.S. The messages issued by these countries still emphasize that the PYD should be employed as the main factor in the Raqqa and Mosul operations. Even the scenario of handing over Raqqa to Kurdish forces is often articulated. Salih Muslim, the leader of the PYD, already professed that they would include Raqqa in Kurdistan, which demonstrates their motivations.

Although Operation Euphrates Shield seems to have succeeded in ruling out the two main factors that threatened Turkey in the north, the support provided to the PYD in the Syrian war is ongoing despite Turkey's resentment. So, the threat has not gone yet, and Turkey's withdrawal from the region does not seem very likely although Operation Euphrates Shield has come to an end.

The PYD's armed wing, the People's Protection Units (YPG), has not yet retreated to the east of the Euphrates River and it still preserves its presence in both Afrin and Manbij. On the other hand, the TSK did not allow the YPG to form a permanent and uninterrupted region.

Since the operation was launched in August, a series of important developments have occurred in Syria. The Assad regime took full control of Aleppo. The opponents gathered in Idlib. Also, a new region under the control of Turkey has emerged, to which migrations have already started. As a result, although Operation Euphrates Shield has come to an end, the Turkish military will probably maintain its presence in Syria due to many factors. Of course, this does not necessarily mean that another operation is to be launched.

At this phase, Turkey will not get involved in a plan that prescribes heading to Raqqa in spite of the PYD, which is in the care of the U.S. However, the country will continue supporting the FSA and keep up its endeavors to consolidate the new region.

Unfortunately, the war in Syria will likely last for a long time. The latest developments signal a serious problem in regards to Sunni Arabs. What will happen to Sunni Arabs if control of the north is assigned to the PYD and the regime solidifies its control in certain locations? Similarly, what will happen to Turkmens then? Turkey is an essential component of this equation, like the U.S. and Russia.
Last Update: Apr 05, 2017 1:11 am
RELATED TOPICS