Referendum results may set tone for Ankara's dealing with US 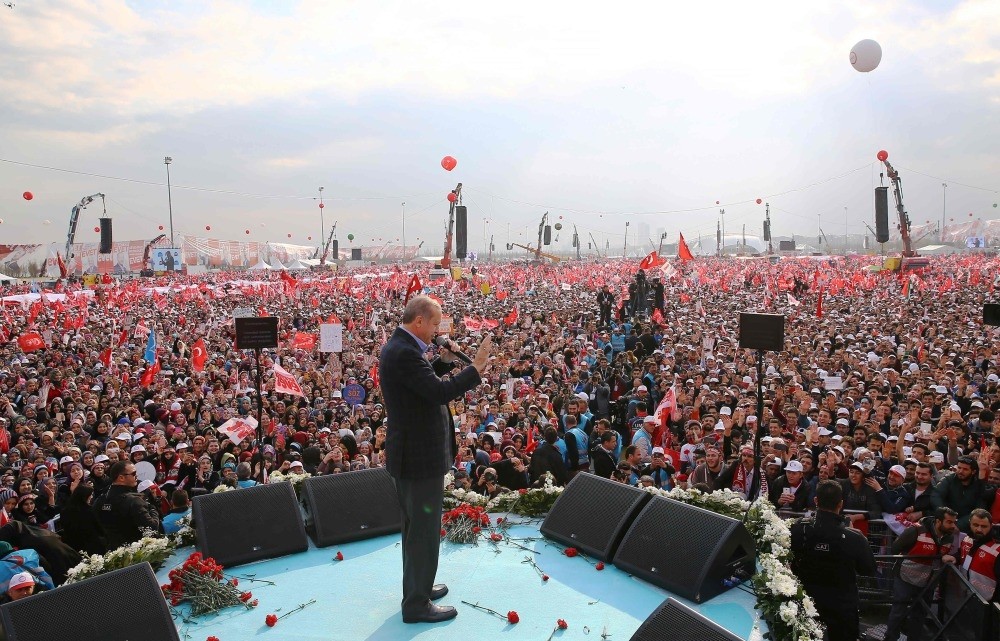 President Erdou011fan delivering a speech during a campaign rally for the ,yes, vote in Sunday's constitutional referendum at the Yenikapu0131 Square in Istanbul, April 8. (AFP Photo)
by Ragıp Soylu Apr 13, 2017 12:00 am

No matter how Sunday's referendum turns out, Turkey's main friction with its most important ally, the U.S., due to certain issues will remain unsolved

The referendum on proposed constitutional changes for an executive presidency this Sunday, regardless of its results, will be a turning point for Turkey. Will it also have an impact on Turkey's priorities in Washington? Bluntly speaking, hardly.

Ankara will pursue its current agenda in Washington with or without a "yes" vote - even though the 'yes' vote can embolden its domestic posture and therefore likely solidify its long-term stability in the region.

The referendum is largely irrelevant when speaking about the Foreign Affairs Ministry's priorities. In fact, I argue that if there were a Republican People's Party (CHP) government in place, the most likely candidate for the presidency, the priorities in Turkish-American relations would still not change.

Turkey's frustration with the U.S. about radical Pennsylvania-based cult leader Fetullah Gülen, the mastermind of the failed coup in Turkey, will continue until the Trump administration is satisfied that it can, on behalf of the Turkish government, confidently pursue the extradition case in court. The referendum result won't change this fact, and Turkey has almost nothing in its arsenal to pressure Washington to take a different stance on the issue. Washington is asking for evidence based on the failed coup investigations. Turkey has recently begun to submit more of the coup dossier now that more indictments are coming forward. (Turkish law says Ankara can't hand evidence related to a case to a foreign government until the prosecutor prepares an indictment.)

When it comes to U.S. support to the PKK terror group's armed Syrian wing, the People's Protection Units (YPG), Turkey will continue to slam the Trump administration. Depending on the decision to directly arm the YPG with heavy weapons, we will likely continue to see more public rebuttals by Turkish officials. Senior Turkish officials are very careful about Trump's White House and would like to give them a chance before going back to the state of affairs that existed during Obama's term.

Some commentators assert that American officials secretly hope that the Turkish government wins this referendum and continues to provide relative stability in the region. A "yes" vote, they believe, would prevent a radical reaction by Erdoğan on U.S. plans for Raqqa. Others believe that if the operation hadn't been delayed, the Turkish government could have used Raqqa as a domestic propaganda tool for the "yes" campaign, making it harder for Washington to come terms with Ankara.

Even though the priorities wouldn't change based on the referendum results, Turkey's tone and response to the development could very well be different based on voting behavior.

Let's imagine another scenario: If the "no" camp were victorious on Sunday night, what would the Turkish government's reaction to American steps in Syria be? I don't expect Ankara to cave in and watch in a moment of domestic political weakness that may arise in this case. The Turkish leadership could respond with drastic measures, such as an unexpected military operation in Syria against YPG-held territories or we could see a Turkish military intervention in Iraq.

In any scenario involving the referendum, Turkey's disputes with its most important and most powerful ally will not be resolved, that is likely to stay in the future, even in a situation involving an opposition-led government in Ankara.
RELATED TOPICS