Any room for Europe to ignore Turkey? 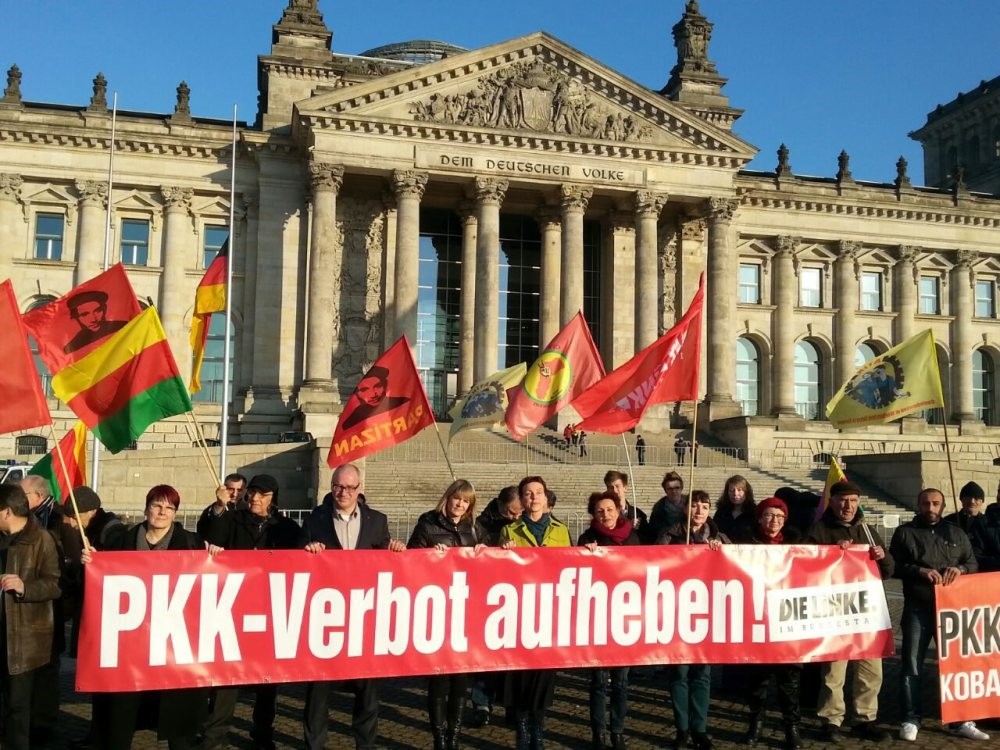 Pro-PKK supporters seen holding a banner that reads ,Lift the PKK ban, during a demonstration in front of the Reichstag building in Berlin to show solidarity with the terrorist group
by Saadet Oruç May 04, 2017 12:00 am

Regarding concerns from the refugee influx to security, the EU should simply cooperate with Turkey

The recent move by the European Union following an unofficial meeting in Malta, which also hosted Foreign Minister Mevlut Çavuşoğlu, revealed the nature of the current relations between Ankara and Brussels, showing that bilateral relations are more frozen than ever. The radical EU representatives are mainly responsible for these damaged ties. A deep analysis isn't needed to see that the EU allows populist figures within itself to isolate "others." Nevertheless, if the two sides cannot make any predictions, it will be the EU side that will depend on Turkey for the solution of actual day-to-day problems. Particularly when it comes to the refugee crisis and security concerns, Brussels should be aware it has to cooperate with Turkey to find a proper way out. The EU's attacks on the Turkish referendum are the latest sign of disrespect from the EU toward Turkey. They declared their support for the "no" campaign while cancelling the 'yes' meeting and carried out propaganda against the Turkish people's free choice for a new system.

In the Malta meeting, various EU bodies called for a halt in negotiations between Turkey and the EU, but they were rejected, and the need for the continuation of talks between Ankara and Brussels was emphasized in the following hours. It was one of the most rational decisions recently made by the EU.

Regarding the security issue, no matter how many EU countries shelter terrorists targeting Turkey, Turkey has always provided real protection for the security of Europe. In particular, Turkey is one of the few countries that fights the Daesh terrorist group on the ground. When it comes to another terror group, the Gülenist Terror Group (FETÖ), some European countries unfortunately have again become a haven for members of the terrorist cult that perpetrated the deadly coup attempt in July 15, killing hundreds of civilians and bombing the parliament building.

Turkey's role in the fight against terror groups that pose a threat to European countries is very significant; thus, the EU should not push Turkey aside for this reason.

In addition, the refugee influx is another major topic, which constitutes the prior concern for the EU and requires serious cooperation with Turkey, which has been hosting 3 million refugees within its borders. Therefore, baseless criticism and enmity of the EU toward Turkey is meaningless for their benefit.

The need to establish a new framework for future relations between Ankara and Brussels is much more important than ever. As President Recep Tayyip Erdoğan will spend the upcoming weeks enhancing diplomacy for critical regional and global political issues, the EU topic will remain on the table to be negotiated by his European counterparts. President Erdoğan is determined to reshape foreign policy by improving Turkey's ties with its allies. However, it is true that the Turkish people rightfully feel disappointed that some member countries of the EU still side with the putschists of July 15, even sheltering them. If the EU wants to better relations with Ankara, it simply has to follow a public diplomatic path and stop supporting terrorist circles that go against Turkey.
Last Update: May 04, 2017 2:00 am
RELATED TOPICS