The downfall of the United Nations in Syria 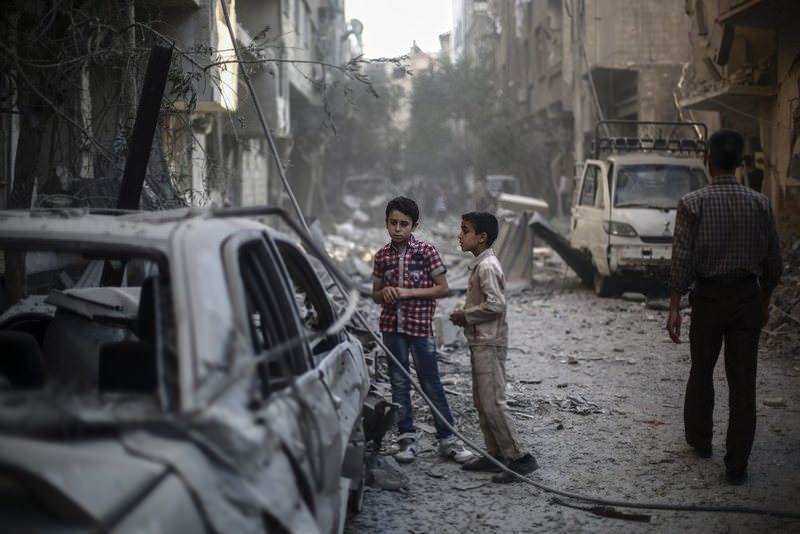 The destruction following an airstrike, which according to local reports, was conducted by forces loyal to the Assad regime on areas held by moderate groups.
by Sadık Ünay Oct 24, 2015 12:00 am

The U.S. and Russia, two permanent members of the U.N. Security Council, have been caught fighting a proxy war in Syria on the pretext of fighting international terrorism

The official and rather naive statement: "The 70th anniversary of the United Nations (U.N.) is an opportunity to reflect - to look back on the U.N.'s history and take stock of its enduring achievements. It is also an opportunity to spotlight where the U.N. - and the international community as a whole - needs to redouble its efforts to meet current and future challenges across the three pillars of its work: peace and security, development, and human rights." was made on the United Nations website to commemorate the 70th anniversary of the institution. While looking at the overly friendly pictures of Russian President Vladimir Putin and Syrian President Bashar Assad at the Grand Kremlin Palace in Moscow, it might be a good idea to reconsider the global pledges of the U.N. in the light of the latest predicament in Syria.

The mechanisms and discourses of the U.N. system evolved over the course of the post-war period in line with the changes in global paradigms on development, democratic rule and conflict resolution. There were successful instances in which the famous Blue Helmets of the U.N.'s peace-keeping forces played effective roles in preventing or stopping civil wars, border disputes and ethnic conflicts. There were also acute failures of the U.N. such as the Bosnian War and ethnic cleansing in Rwanda, where its foremost mission to provide peace and security were left in tatters. Especially during the Cold War, the rigid structure of the U.N. Security Council and the need for unanimous decisions meant that in the context of proxy wars between the U.S. and the Soviet Union in different regions, the peace-making and peace-keeping roles of the U.N. were almost suspended.

In that respect, the utter helplessness of the U.N. in Syria since the inception of the conflict except for refugee issues presents an utterly anachronistic picture. Five years of intense fighting, which has cost the lives of around 350,000 people largely due to inhumane military attacks by Assad regime forces, has practically turned Syria into a failed state. Millions of people have become refugees and had to flee to neighboring countries and Europe while fighting among regime forces, the Islamic State of Iraq and al-Sham (ISIS), moderate opposition and the Democratic Union Party's (PYD) armed People's Protection Units (YPG) took an increasingly sophisticated form.

The entrance of Russia directly as a combating force completed this bizarre picture under the helpless looks of U.S. President Barack Obama's administration and the U.N. Two permanent members of the U.N. Security Council, the U.S. and Russia, were caught fighting their proxy wars in relatively small Syria on the pretext of fighting international terrorism. In retrospect, Putin's shrewd diplomatic attack to break Western economic and political pressure stemming from his previous antics in Ukraine triggered Russia's active involvement in the Syrian war and transformed all power projections on the ground. Therefore, the next rational step for Putin was to invite Assad to Moscow and provide him a hint of the international political legitimacy that he eagerly awaited for five years. There goes our anachronism, the leader of a global though embattled superpower holding the hand of an ailing and ruthless dictator while the international community watches in anguish. Just like the old days of the Cold War during which the U.N. system were practically bypassed.

As hollow and theoretical discussion as to whether the transition process in Syria should include Assad or not continue unabated in the West, Putin had already made a critical intervention and showed his full support for Assad and the Baath regime as one of Russia's oldest allies in the region. Putin's statement in which he mentioned the need to bring together the forces loyal to Assad and the PYD to save the future of Syria, as well as his call not to make any differentiation between Islamist terrorists, placing the moderate opposition Free Syrian Army and ISIS in the same basket, might give you some idea about the future course of the Syrian conflict. Given the continuing indecisiveness on the part of the U.S. under a lame duck president and Europe's strategy to avoid open confrontation with Putin, things are likely to get messier before some sense of stability can be restored.

Meanwhile, the U.N. happily celebrates its 70th anniversary while watching Putin's show in Syria on the sidelines and silently wait for the end of the war to enter the seen for humanitarian work. If it reaches its centenary, the inability to end the war in Syria will be remembered as one of the gravest failures of the U.N. system.
RELATED TOPICS