Making sense of the Brex-shock 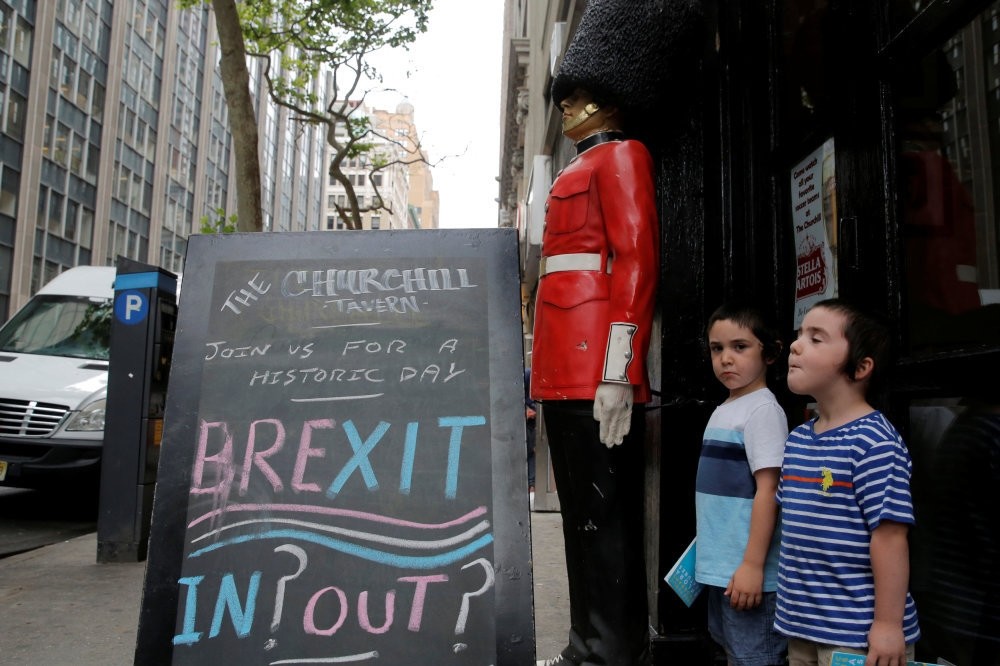 Children standing next to a chalkboard in Manhattan, U.S. on June 24, 2016, advertising the Brexit on the day the British went to a referendum to vote on whether the U.K. should remain in the EU or leave.
by Sadık Ünay Jun 25, 2016 12:00 am

Cameron's bold political gamble has backfired terribly with a 52 percent 'leave' vote, which will probably cost him his political career

The Brits never cease to shock the world. Historically, they have never been part of the "ever-closer integration" camp in Europe and managed to maintain a space of autonomous maneuver by staying out of the eurozone, the Schengen free movement regime and constitutional endeavors. They waited 15 years and failed in their effort to launch a free trade zone before eventually joining the Customs Union, while also never believing in a transnational political integration project governed from Brussels. Thus, Britain was always seen as a "reluctant partner" and the representative of the Atlantic axis in Europe, which maintained its key strategic ties with the United States but preferred to hold a substantial stake in European institutions nevertheless. Therefore, when the decision to hold a popular referendum on Britain's potential exit from the EU was announced, objective observers evaluated this as yet another example of neat British diplomacy intended to extract maximum concessions from the EU, which seemed to be increasingly dominated by Germany.

Indeed, as a conservative politician, David Cameron intended to use the referendum as a bargaining chip in his competition with the Germans for European leadership and managed to sign a new agreement with Brussels on the eve of the popular vote. Cameron and the British establishment were terribly bothered by the unstoppable rise of the influence of Merkel's Germany at the heart of the European project, following the massive financing needs created by the euro-crisis via bailout packages for Greece and southern Europe. France was also not at all happy with the ever-growing and disproportional influence of Germany in the EU, but Holland's weak administration did not possess the political and foreign policy instruments to follow an effective balancing strategy. Therefore, they silently supported Britain's diplomatic wrangling with the EU, as did the Obama administration in the U.S., with the hope that the threat of Brexit would convince Merkel and her entourage in the EU to accept radical reforms in the way the union is managed and popular demands are reflected in the policy making process.

As of today, it seems that Cameron's bold political gamble has backfired terribly with a 52 percent "leave" vote, which will probably cost him his political career. Indeed, Cameron acted like a defeated gentleman, while announcing that his party will need new leadership in the October Congress. Yet, in the global environment of rising xenophobia, Islamophobia, fear of migration and far-right political rhetoric, it was conceivable that even the heartland of liberalism could turn to isolationism. At a time when Donald Trump seriously runs for the American presidency and far-right political movements moved to the center of the European political spectrum, this outcome is hardly surprising, particularly against the backdrop of the assassination of Labour MP Jo Cox by an ultra-nationalist British citizen. The fact that the Netherlands' ultra-nationalist leader Geert Wilders called for an urgent Dutch referendum shows you the rising mood of European disintegration on a precept of exclusive and micro-nationalisms.

After all, Brexit represents the first instance of a member state of the European project leaving the international entity in its half-a-century lifetime. Strangely enough, there is no technical and legal infrastructure that regulates such instances of exit because they were never presumed in the first place. Whether the U.K. prefers to revitalize some form of European economic zone or follows an alternative path through a series of bilateral agreements remains to be seen. The EU's own strategy of managing this systemic crisis will also have repercussions for the long-term sustainability of the union.

Whatever happens, the fact that one of the most important nations representing the European project decided to opt out of the EU will have serious psychological repercussions. The Brexit referendum showed the increasing discrepancy between the young and more progressive voters who opt for inclusive integration strategies and the older and more conservative voters who do not want to take responsibility for region-wide problems, such as rescue packages and migration flows. Xenophobic and ultra-nationalist political currents across the continent will certainly gain strength; and the British as well as European economies will take a hit in the short run. Pandora's Box might have been opened for the future of Europe, and what comes out of it might not be pleasant.
Last Update: Jun 25, 2016 1:14 am
RELATED TOPICS