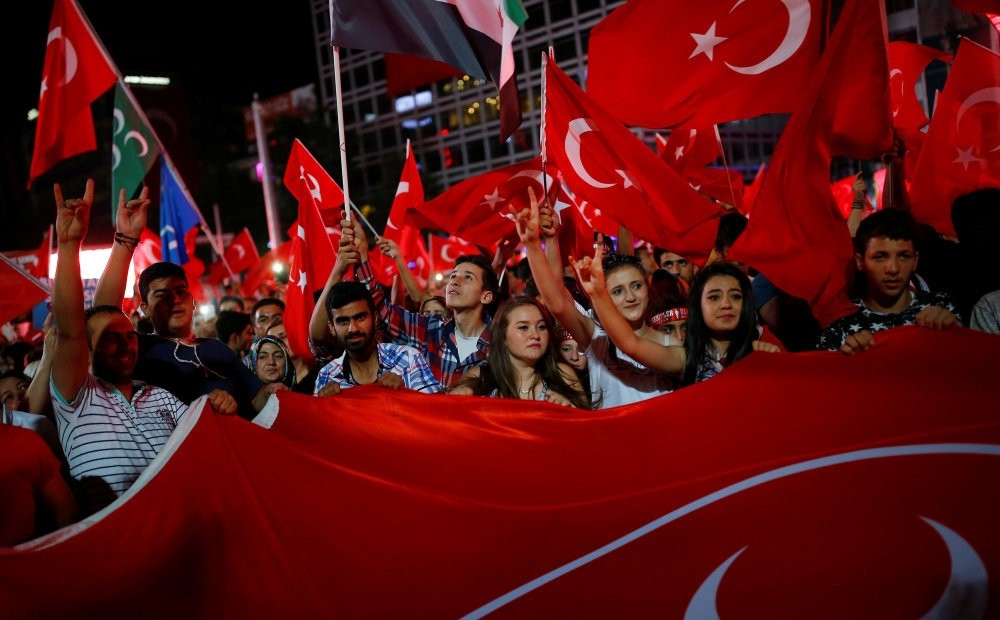 People shouting slogans and waving flags as they gather in solidarity night after night since the July 15 coup attempt in central Ankara, July 27. (Reuters Photo)
by Sadık Ünay Aug 06, 2016 12:00 am

The foiled July 15 coup attempt perpetrated by a military junta led by adherents of the Gülenist Terror Organization (FETÖ) occurred at a critical juncture when Turkey was readjusting its foreign policy toward normalization with Russia, Israel and possibly Egypt. The main rationale motivating the normalization strategy was to expand the narrowing space of regional maneuver following the reversal of the Arab Spring and the jet crisis with Russia, while rejuvenating international economic relations. The changing of the guard at the Prime Ministry was concomitant with the normalization agenda after Binali Yıldırım crystallized himself as an ideal actor with a project-oriented, business-like, rational and unexaggerated style. The abortive coup attempt not only interrupted the normalization process but also created a deep-seated socio-political and psychological trauma whose impact will be felt for many years to come. Although the composition of the junta, the layers of its hierarchical structure, its domestic and international circles that provided logistical and financial support are still to be clarified, it is certain that Turkish foreign policy will follow new parameters after July 15.

First and foremost, the inaction and silence from the U.S. administration, NATO and the European Union concerning the bloody coup created clear disappointment in Turkey with the Western alliance. Washington's initial attitude that invited "parties in the conflict to calm" was reminiscent of the unprincipled stance taken during the coup in Egypt, while NATO failed to display a meaningful response to the major security threat toward its most important member in the Middle East. European leaders, including German Chancellor Angela Merkel, were totally silent until the coup was foiled, and were busy condemning security operations aimed at junta members on human rights grounds. The Western world applied its conventional Orientalist approach to the coup attempt and waited until the "winners and losers" of the conflict were clarified to gauge its reaction accordingly. Excluding exceptional voices such as former Swedish Prime Minister Carl Bildt and grudging visits by Thorbjorn Jagland from the Council of Europe and the U.S. Chief of Staff General Joseph Dunford, high-level support for democracy and rule of law was non-existent.

On top of that, Turkey's demands from the U.S. for the immediate extradition of Fethullah Gülen, the mastermind behind the coup, continues to fall on deaf ears. Unsurprisingly, widespread disappointment with Western indifference and the perception that the U.S. administration is actively supporting Gülen and his cult triggered the rise of anti-American, anti-Western inclinations in Turkish society. Hence, the unraveling of the extradition process might well determine the future course of Turkish-U.S. relations with crucial implications for military bases in the country and anti-DAESH collaboration. The patronizing and insensitive attitude of the EU leaders following the coup might also trigger a process leading to the freezing of accession negotiations for a foreseeable period. President Recep Tayyip Erdoğan's critical visit to Russia might herald a new era of geopolitical alignments for Turkey with Russia, China and other emerging powers to balance the unsatisfactory relationship with the Western alliance. If this potential is realized, Western actors will not have anyone to blame their failure to support democracy, human rights and rule of law during times of crisis on.

On the economic front, the material cost of the coup attempt is calculated to be around $100 billion, but effective crisis management by the Central Bank of the Republic of Turkey and economic bureaucracy managed to prevent any structural damage. The blow to the financial markets was less than that created by the downing of the Russian jet by Turkish F16's or former Prime Minister Ahmet Davutoğlu's resignation announcement. Having seen off the coup, we witnessed an economic rally with Turkish stocks and bonds emerging as the best performing assets in the global economy. Despite terrorist attacks and the failed coup attempt, the economic expectations from Turkey are still robust and the largest infrastructure projects in the world continue uninterrupted. In the post July 15 era, Ankara's road map in international economic relations might evolve into a strategy of diversification and deeper integration with emerging economies so as to decrease dependence on the EU. This might create new opportunities in international trade, energy and infrastructure investments for the BRICS economies and potential new partners. Turkey's journey as a rising regional democratic power continues despite multifarious internal and external interventions; but might create surprising new partnerships.
RELATED TOPICS