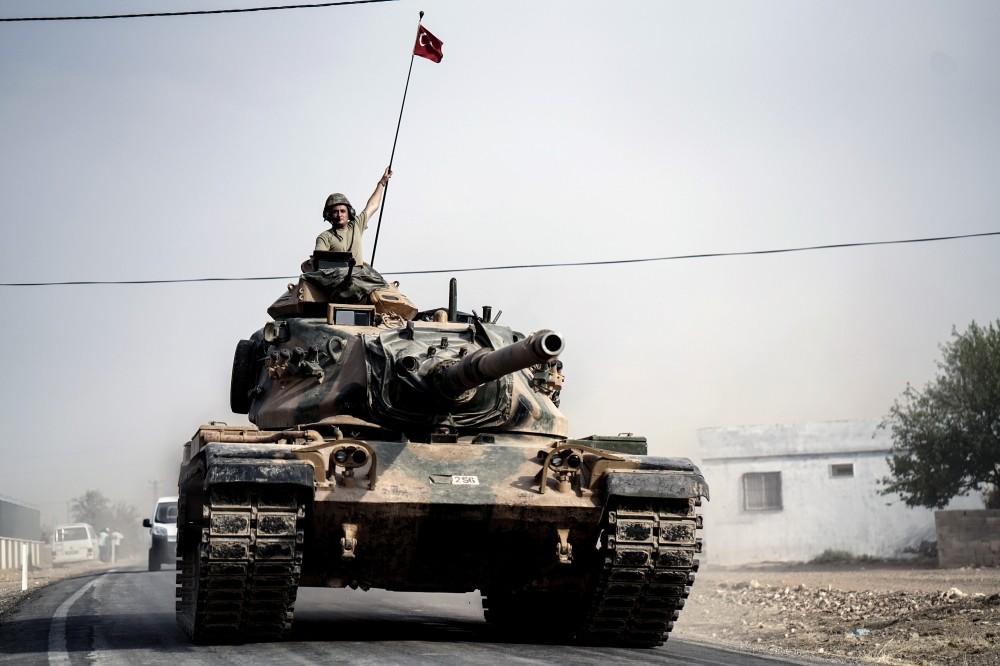 While U.S. Vice-President Joe Biden was on board Air Force One en route to his ice-breaking visit to Ankara following the dismal performance of his administration following the failed coup attempt, Turkish jets were hovering in the skies of Jarablus about to kick start one of the most critical military operations in recent years. Having been sidelined from the sophisticated turf wars in Syria following the jet crisis with Russia last November, Ankara was finally able to create some breathing space thanks to ongoing normalization with Moscow. Ankara has perfectly utilized this new-found space. The vital breathing space enabled by the strategic rapprochement with Russia was institutionalized during President Recep Tayyip Erdoğan's visit to St. Petersburg on Aug. 9, which paved the way for intensive shuttle diplomacy that included work with Iran. A relative harmonization of strategic priorities in Syria among the three crucial regional powers constituted the critical diplomatic backdrop for the effective realization of Operation Euphrates Shield.

As the air defense systems of Russia, Iran and the Syrian regime in the area were demobilized, Turkish Special Forces, F16s, AWACS, tanks and armored personnel carriers moved into Jarablus and performed a swift operation supporting the Free Syrian Army forces. The strategic town of Jarablus was rescued from DEASH within 12 hours, but this pioneering operation is expected to last for around two weeks, and its geographic scope toward the south is being widely discussed. While the Turkish Armed Forces (TSK) and intelligence services were successfully spearheading the fight against DAESH in Syria, there were rare supportive voices coming from the Western media and diplomatic sources that went against the misinformation campaign that long-depicted Ankara as a DAESH supporter and the PKK-affiliated People's Protection Units (YPG) as freedom fighters. As Turkish artillery began to bomb YPG forces in the south of Jarablus towards Manbij, the strategic priorities of Turkey and the U.S. finally began to clash on the ground as well.

The lame duck Obama administration seems insistent on continuing to use the YPG as their ground forces by providing logistical, strategic and air support. This is, on the face of it, compatible with the popular "no boots on the ground" narrative. The YPG, in turn, abuses the wide space of maneuver provided by extensive American support to galvanize its hold on the Azaz-Mare corridor on the precept of fighting DAESH. It is a poorly kept secret that the PKK-YPG nexus are aiming to work for a northern corridor in Syria that could constitute the basis of a future claim for a federal unit within Syria or even an independent state that could align with a transformed Northern Iraq and parts that could be disassociated from southeastern Turkey via terror. This unrealistic and ideological vision might seem a far cry from American pragmatism, but the conjunctural alliance between the YPG and the U.S. facilitated the construction of a de facto corridor that reached the Euphrates.

The fact that Turkey stood behind its declared red lines and acted swiftly to curb the YPG's expansion to the west of the Euphrates is a strong reminder that Ankara will resist fait accompli attempts in the future configuration of Syria. It is noteworthy that the renewed breathing space that Turkey found in protecting its border security, preventing new migration flows and interrupting the de facto YPG corridor was only made possible by an intense diplomatic dialogue with Russia and Iran that might reduce friction with the embattled Assad regime. Premature "axis shift" arguments notwithstanding, Ankara's ability to normalize its diplomatic relations with regional powers and expand its strategic options beyond those presented by the U.S., NATO and the EU seem to be paying off.

While Biden was unsuccessfully trying to complete his charm offensive in Ankara by extending sympathetic messages aimed at smoothing the tide of rising anti-Americanism, the cold reception from President Erdoğan and the public was indicative of the dominant mood. Gaining the hearts and minds of Turkish society will require concrete steps in the Gülen extradition process and downgrading collaboration with the Democratic Union Party (PYD), especially west of the Euphrates.

The increasing intensity of terrorist attacks on Turkish soil by both DAESH and PKK operatives in recent days demonstrate that Turkey's entrance in the Syrian theater will create shockwaves and trigger counter-moves by the illicit structures on the ground. Yet the resolve of both political actors and the public in general are resolute enough to withstand blackmail attempts and protect its national interests in Syria.
RELATED TOPICS