The crisis in the Gulf and prospects of counterrevolution 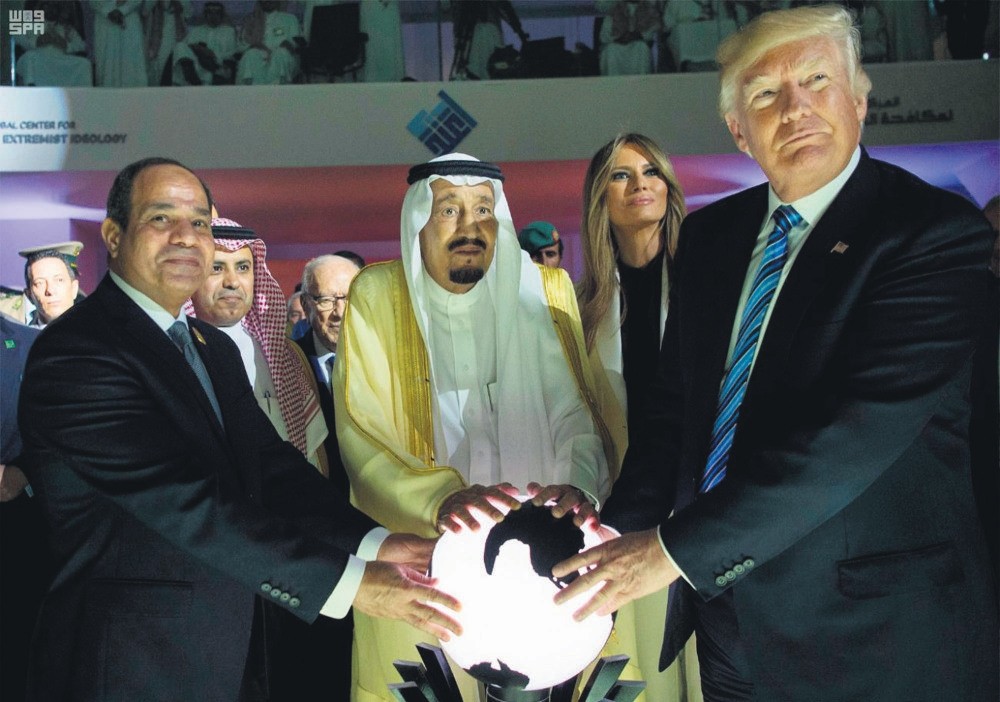 Egypt's coup leader and President Sissi (L), Saudi King Salman (C) and U.S. President Trump (R) place their hands on a globe during a Riyadh meeting that is claimed to have played a big role in the recent decision to isolate Qatar.
by Sadık Ünay Jun 10, 2017 12:00 am

The flow of history seems to have gained additional momentum in the Gulf once again in the wake of critical developments that led to the abrupt diplomatic and economic isolation of Qatar by several Arab states, including Saudi Arabia, the United Arab Emirates (UAE) and Egypt. Coordinated statements announcing a complete diplomatic break as well as shutting down of air, sea and land links with the small peninsular country of Qatar instigated a regional crisis unprecedented in Gulf politics in recent years. It was no secret that there was an ever-widening gap between the foreign policy approaches of Qatar and the rest of the Gulf Cooperation Council (GCC) members in addition to Egypt concerning the position to be taken vis-a-vis groups associated with the Muslim Brotherhood and other Islamist movements in the Middle East since the Arab Spring.

Like Turkey, Qatar rejected that these movements were affiliated with terrorism and argued that they expressed legitimate democratic demands against authoritarian governments while extending them financial and media-based support through the widely effective Al- Jazeera network. Nevertheless, Qatar's relations with the Muslim Brotherhood was categorically classified as supporting extremism and terrorism before and placed under the spotlight when Saudi Arabia, the UAE and Bahrain withdrew their ambassadors from Doha in 2014.

But the issue of supporting Islamist groups has turned into a precept for looming regional conflict following the participation of U.S. President Donald Trump in the historic Riyadh Summit. When the Global Centre for Combating Extremist Ideology was launched, Qatar was singled out as the source of militant extremism in a volatile region dominated by shifting alliances. Soon after, there were hacking incidents aimed at the Qatar News Agency (QNA), which saw rising tensions by disclosing sympathetic statements by Qatari Emir Sheikh Tamim al-Thani toward Iran and Hezbollah, which were officially rejected, but still spread by some circles as facts. What followed was a series of swift decisions to isolate Qatar diplomatically, physically through land, sea and air blockages and socially through forced movement of Qatari citizens.

TIMING OF THE CRISIS: WHY NOW?

As far as the specific timing of the crisis is concerned, there are several explanations given from different perspectives on what has really triggered such a harsh and coordinated response to Qatar. One political economy explanation argues that growing collaboration between Iran and Qatar regarding the exploration of the South Pars/North Dome Gas Field – by far the largest single piece natural gas field in the world holding 51 trillion cubic meters of natural gas – was among the main factors that instigated the crisis. This vast and strategically important field holds a larger natural gas reserve than all other listed reserves combined. Iran and Qatar peacefully continue to explore their portions of the reserve and Iran has already signed a deal with French company Total for a major extension in the next phases. There are claims that GCC members were keen to prevent a substantial increase in the gas supply at a time when global prices of oil and natural gas are already at low levels; and even the U.S. was reluctant to leave the control of the vast North Dome field to Qatar singlehandedly.

Then there is the ransom story, which claim that Qatar has allegedly paid around $1 billion for the release of a royal falconry party abducted while hunting in southern Iraq, and the bulk of the money went to Iran and the Shiite militias. This, according to the Financial Times, was the straw that broke the camel's back for Qatar's critics and triggered the move for strict isolation. Obviously, it is impossible to verify with certainty the actual source of this regional crisis, but all of the factors mentioned above from foreign policy to political economy might have played their relative role.

As for now, the initiative to isolate Qatar has extended to more than 10 countries and the main demands for Qatar are focused on the extradition of 12 groups and around 60 individuals that are claimed to have links with extremist terrorist movements as well as cutting support to proxy wars across the region. In a region where almost all the major actors are involved in proxy wars, these demands might sound unrealistic. But whether this initiative will turn into a counterrevolution against the deep social currents that underpinned the Arab Spring, or will be muted following certain compromises by Qatar, is to be seen. Even if there is no systemic counterrevolution to undermine the civil forces that were mobilized since the Arab Spring, Trump does not seem to face much difficulty in finding allies in the Middle East who associate their national interests with perpetual tension and instability. That is why, the efforts of major regional actors such as Turkey and President Recep Tayyip Erdoğan as an innovative policy entrepreneur will be doubly important for regional stability in the medium term.