European elections and the outlook for Turkish-EU relations 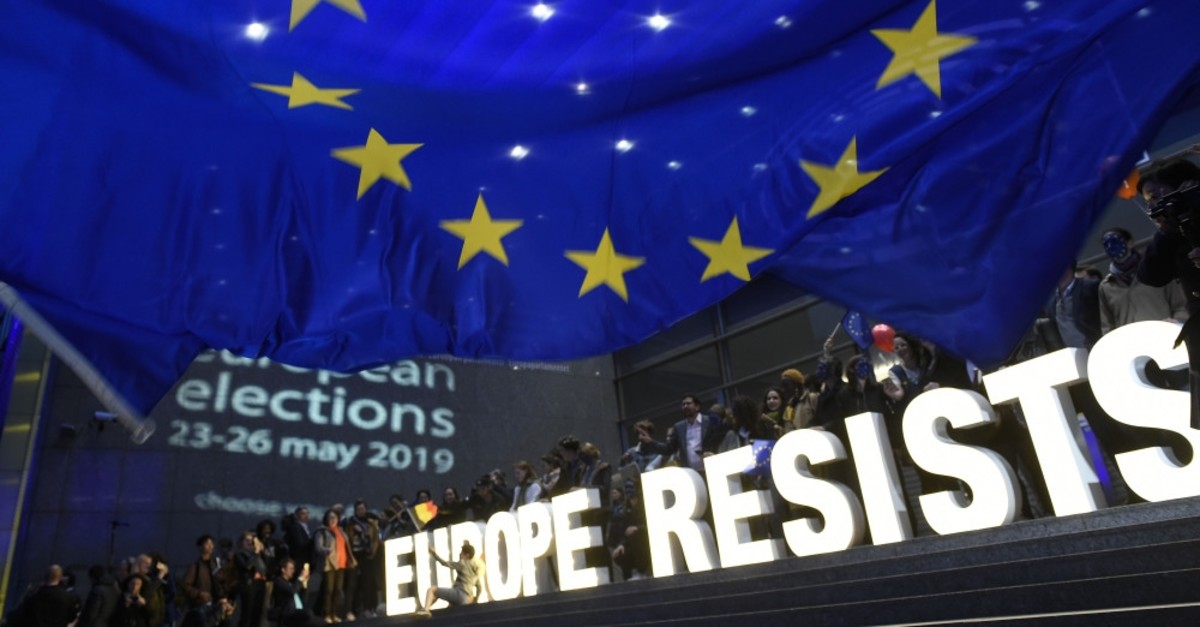 A person sits on the steps waving the Belgian flag as a group of activists hold letters forming the words u201cEurope Resistsu201d outside the European Parliament after the announcement of the results for European parliamentary elections, Brussels, May 26
by Talha Köse Jun 02, 2019 12:04 am

Although the European Parliament elections granted more ground to euroskeptic parties, the situation is still manageable. Turkey will likely rely on bilateral ties rather than EU institutions in the future

The European Parliament elections on May 26 raised some unexpected results for both European politicians and other actors that follow developments in Europe closely. Nationalist and right-wing populist parties increased their support base as expected, whereas pro-EU parties still performed better than expected. Despite the pre-election pessimism, pro-European parties gained relatively decent results. During the campaign period, supporters of the EU project and mainstream parties were concerned about the surge of right-wing populist parties and euroskeptic parties. Right-wing populism continues to rise, but the speed of their rise has declined.

In the U.K., Nigel Farage's Brexit Party gained 31% of the votes, yet the combined vote share of parties opposed to leaving the European Union exceeded that number to a large extent with 47%. In France, Marine Le Pen's National Rally (RN) gained 23% of the votes. President Emmanuel Macron's Renaissance list lost power after the yellow west protests, but his votes are still close to Le Pen. Italy's Matteo Salvini and Hungary's Viktor Orbán are the winners of the European Union elections in their countries. In Germany, coalition partner parties, the Christian Democratic Union (CDU) / the Christian Social Union (CSU) and the Social Democrats (SPD) lost some ground, but the Greens and Liberals performed better than expected.

Mainstream parties are in decline in major European countries, but the smaller parties that are close to those mainstream parties increased their votes. The leadership problem in Germany, France, the U.K. and Italy is another significant issue that may have long-term consequences for the EU. No strong leader with the capacity to promote an inclusive agenda prevailed in the elections.

The turnout rate in the European Union elections was more than 50%, which is one of the highest percentages in the last three decades. Populist parties increased their overall support base from 20% to 25%, but this is still manageable. The rise of populist and extremist left and right parties has started to motivate and mobilize constituents in center-left and center-right parties. Previously, anti-EU and populist parties were able to mobilize and motivate their voters better, but in the light of recent developments pro-EU parties were also able to mobilize their constituents. Populist and far-right parties' mobilization potential frightened people who are in favor of mainstream parties.

New "exits" will be discussed in other European countries in the coming period due to the declining center. Europe will continue to be inward-oriented in the coming years due to existing disagreements. Transatlantic ties will likely be weakened with Brexit and the weakening of Emmanuel Macron. The German CDU leader will be more focused on consolidating its fragmented domestic political landscape.

How relevant are the European Union election results for Turkey?

The outcomes of the European Union elections will also have significant consequences for Turkey as well. Turkey is still a candidate country, and the EU is the most important economic partner of Turkey; therefore, the change in the political landscape will affect the Turkish accession process. EU enlargement will not be a priority item on the agenda of European politicians and lawmakers. Like Brexit, we will talk about other exits, which may bring to the discussion a new form of relationship. The U.K. and other alienated actors may strengthen bilateral ties with Turkey.

Islamophobia and anti-Turkish claims will continue to be on the agenda of extreme-right and extreme-left parties. Europe will fall behind its constructive political agenda by promoting democratic values in the coming years. Deteriorating European economies are also a matter of concern for Turkey since more than half of Turkish exports are to Europe. Political and economic agendas of extreme-right and anti-EU parties will be more nationalistic and more protectionist. Those policy priorities may also affect other smaller members of the union negatively.

Turkey will be interested in the financial aspect of the EU project and will probably continue to feel alienated from the idea of membership. A more practical and realistic strategy and reassessment is the necessity for Turkey – due to the ongoing process of rise of right-wing and nationalist parties – to continue for a while unless a serious pro-EU leadership takes a more active role. Turkey's membership process will continue to be a controversial item in the European Union and not many actors will risk their political credit to favor a pro-Turkish agenda.

Turkish alienation towards EU membership will accelerate, but bilateral relations with European countries or leaders that also feel relatively disappointed by the union may create new opportunities for Turkey. The newly elected European Parliament will not bring any significant change for Turkey in the short term. The only actual reality in Turkey about the European Union and membership is the feeling of apathy. This apathy may turn into complete indifference if EU actors and institutions fail to make themselves more relevant to Turkey. Turkey, however, will try to refocus on improving its ties with European actors on bilateral terms.