Turkey's 9/11 and the usual suspects 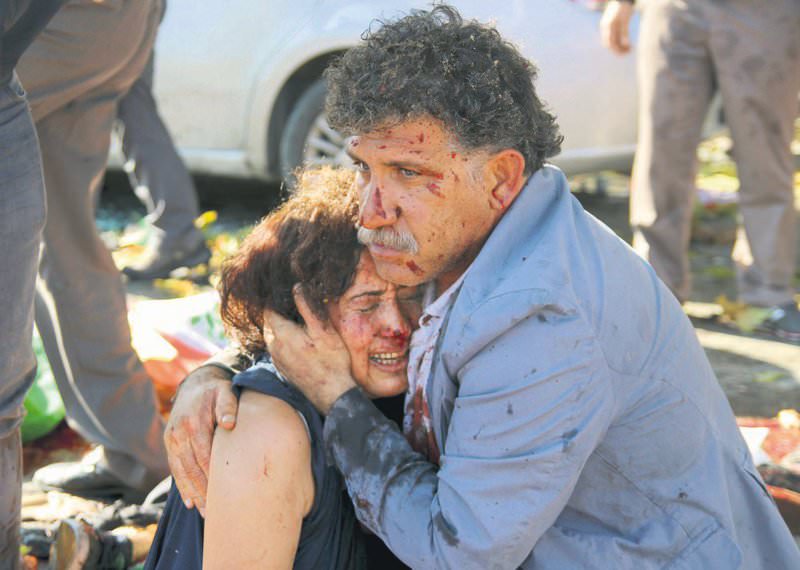 The government has declared three days national mourning due to the latest terrorist attack, which is the bloodiest in Turkey's history, targeting the country's domestic peace, societal integrity and political stability

Fighting terror for 35 years, Turkey was shocked by the bloodiest terrorist attack in its history on Saturday morning. Terror targeted a peace rally, which was organized by some political parties, including the Peoples' Democratic Party (HDP), and nongovernmental organizations in Ankara. Some 97 Turkish citizens were killed in the attack, and more than 200 were injured. The government declared three days of national mourning after this shocking event. President Recep Tayyip Erdoğan, government authorities, opposition parties and nongovernmental organizations condemned the attack and called on the public to remain calm.

The attack is thought to have been conducted by two male suicide bombers. It is evident that the two terrorists took every detail into account to have a high number of fatalities. According to data announced by Prime Minister Ahmet Davutoğlu, two terrorists went into the crowd meeting at the train station and headed to the rally that was to be organized in Sıhhiye Square. Safety measures and searching spots were organized at the rally location. It is obvious that the terrorists blended into the crowd without being noticed by security forces since the first location for the meeting was a ways from the rally area. As the march toward the rally area began, one of the suicide bombers detonated themselves near the HDP group, and the other one followed suit. It is understood that they used bombs reinforced with iron shot to cause a high number of casualties.

Upon the attack, security units kicked off an investigation to identify the assailants' identities and the terrorist organization they were affiliated to. Since some bodies were blown entirely to pieces, some samples were taken, and DNA analyses are currently being conducted.

Regardless of which organization conducted the assault, it is definite that Turkey is under large-scale terrorist attack. With the fatalities and public indignation it caused, the bloodiest attack in the history of the country aimed to undermine Turkey's domestic peace, societal integrity, political stability, will to fight against terror and maybe even foreign policy acquisitions. In terms of the targeted effect, this assault can be regarded as Turkey's "Sept. 11." When the assailants are identified via reliable documents, we can argue that a new process will start in the fight against terrorism in Turkey. This barbarous and inhumane attack will of course have recompense.

Davutoğlu listed the four usual suspects that might have organized the attack. According to the government, the Islamic State of Iraq and al-Sham (ISIS), the outlawed PKK, the Revolutionary People's Liberation Party-Front (DHKP-C) and the Marxist-Leninist Communist Party (MLKP) might be behind it. It is worth to note that ISIS and the PKK stand out as the organizations Turkey has been fighting simultaneously since late July 2015. And Davutoğlu further reclaimed that Turkish government is densely focusing on one of these groups.

It would not be a surprise if ISIS were revealed to have been behind the attack. On July 22 this year, some 33 Turkish citizens were killed in another suicide bomb attack in Suruç, Şanlıurfa. In this attack, ISIS targeted Turkish citizens who were trying to provide aid to war-ravaged Kobani. Upon the attack, Ankara launched a cross-border operation against ISIS on July 23. The organization's encampments in Syria were targeted in the operation. Moreover, Ankara's support to the anti-ISIS coalition was intensified, İncirlik Air Base was opened to coalition aircraft, and Turkish warplanes took part in operations against ISIS.

Upon this determined attitude, ISIS broadcast a video in which they declared Erdoğan a "non-believer" and ordered its militants based in Turkey to attack metropolises. Lately, another development that was not reported in the media took place. In a raid on an ISIS cell house, some 33 suicide bombing garments were seized, which demonstrates that ISIS has been planning suicide bomb attacks in Turkey. Doubts revolve around ISIS since the attack in Ankara bears many similarities to the Suruç attack. For instance, the suicide bombs were reinforced with iron shot in both attacks, and the HDP was again targeted, probably since it is affiliated with the Democratic Union Party (PYD) whose armed People's Protection Units (YPG) defended Kobani against ISIS.

However, terrorist assaults are by definition complicated, dark incidents. The perpetrators may choose unexpected targets to conceal themselves better and attain their aims in a roundabout way. Therefore, the Ankara bombings might have been organized by the PKK. It would not be a surprise if the PKK were behind the attack, as well.

Let's continue with another development that was not reported in the media. Last week, Turkish intelligence units informed police units that nine suicide bombers affiliated with the PKK entered Turkey over the Syrian border. Two of them were seized in Istanbul and Ankara. Had they not been seized, Turkey might have been confronted with even more violent, large-scale terrorist attacks.

But why would the PKK target the HDP, which is the organization's political wing? Before answering, we should take into account the current picture and recent developments. Following the June 7 elections, the PKK kicked off violent activities without any justification, urban areas in the region turned into battlefields, about 2,000 terrorists were killed, the people in the region reacted to the PKK, and the assaults tarnished the image of the HDP, which presented itself as a peace movement and caused a decline in the party's vote share, according to recent public opinion surveys.

Let's continue with an interesting article reported on Sept. 15. "A PKK militant was apprehended, while placing a bomb in a children's park at a destination where the HDP organized a march." The terrorist was about to target the HDP. Why? To create an impression that the state not only targets a terrorist organization, but also targets a political party to ease the psychological pressure on the organization in this way. Also, it might be aimed at giving the HDP, whose political image has been tarnished due to terrorist assaults, a breath of life before the Nov. 1 elections. Do not think this is an exaggeration. Bear in mind that terrorist groups live on blood, and they can resort to any method to achieve their goals.
Last Update: Oct 13, 2015 1:56 am