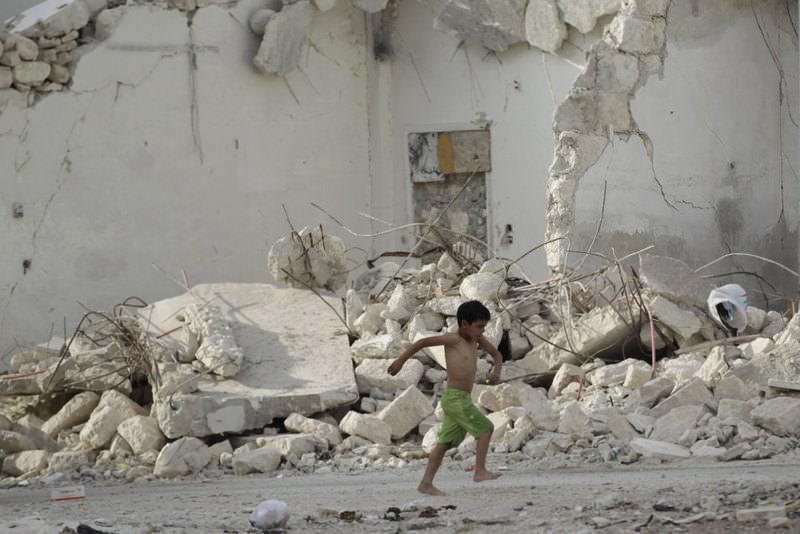 Russian backed-Assad regime's airstrikes, which include the use of barrel bombs, resulted in the deaths of hundreds of civilians and left thousands injured.
by Yahya Bostan Oct 26, 2015 12:00 am

The latest report from Amnesty International revealed interesting details about the PYD, saying that the organization conducted ethnic cleansing against Turkmens and Arabs after seizing Tal Abyad

When I asked a source who closely follows the Syria issue about why Russia has directly intervened in Syria, he told me that Syrian President Bashar Assad has 40,000 soldiers left, according to the existing data, and added: "Assad is having difficulty protecting even 14 percent of the territory he holds. He said: 'That is all from me,' at the end of spring. The military presence of Iran and Hezbollah was not enough to change the balances either. Iran went into panic and convinced Moscow. I think Russia got involved at the final point."

In other words, there are two motives behind Russia's military intervention in Syria. The first is to protect Russia's military presence in Tartus against all risks and the second is to control Latakia and its surroundings where Assad continues his existence and not to allow Assad to lose his throne. It also aims to include Assad in negotiations and to make him a part of the game if a decision is to be made over Syria's future.

Obviously, things are becoming more definite about Syria's future. This is understood not only from Russia's military intervention, but also from the contents of the past week's discussions and the rapid course of affairs. The U.S., Russia, Turkey and other relevant countries have begun to vehemently debate a transitional government with or without Assad in Syria. Turkey has reserved Russia's proposal for a transition period with Assad that does not have a certain schedule.

As these debates continue, Russian President Vladimir Putin also continues his moves to give lifeblood to Assad, who went to Moscow and met with Putin in a surprising visit. Putin called President Recep Tayyip Erdoğan the day after and said: "He is also aware of hard conditions. He is ready to take a step toward a transition period." Erdoğan answered: "We do not believe in Assad. We no longer have confidence in such suggestions." The U.S. secretary of state and foreign ministers from Turkey, Russia and Saudi Arabia held a summit on Syria on Friday in Vienna.

These intense diplomatic talks might push actors inside and outside of Syria to scramble for a share in Syria even before things are settled. The Democratic Union Party (PYD) is one of these actors that are likely to embark on a quest for seizing new territory, expanding their spheres of influence as well as obtaining the territory that they dream of when Syria's future becomes clearer. It also aims to achieve more in order to have a more expedient trump card in negotiations.

The PYD is an organization that Ankara considers an affiliate of the PKK terrorist organization. During its operations against PKK positions in Northern Iraq's Qandil Mountains, the Turkish Armed Forces (TSK) found that the ammunition that the U.S. provided the PYD had moved to the PKK. Furthermore, similar weapons were found on PKK militants who were killed in clashes with security forces in Turkey. Therefore, the PYD has become an organization that Turkey has started to consider a threat and is keeping a close watch on it.

What worries Ankara is not only the relation between the PYD and PKK. The latest report of Amnesty International revealed interesting details about the PYD, saying that the organization initiated ethnic cleansing against Turkmens and Arabs after seizing Tal Abyad. This is a reality to which Ankara has pointed for a long time. People are displaced and urged to migrate. The PYD pursues a rigid "Kurdification" policy in the places it captures. In other words, it seeks a "sterile" piece of land that is purified of Turkmens and Arabs, even from dissenting Kurds in northern Syria under the mask of fighting the Islamic State of Iraq and al-Sham (ISIS). It has been looking to seize Jarabulus, which has been in ISIS's grip for a long time. For the PYD, taking control of Jarabulus means crossing west over the Euphrates and unifying its separate cantons. Thus, it plans to create a contiguous line in northern Syria.

ISIS is another organization that might make a new move to take advantage of the recent context in Syria. It is no secret that ISIS carried out the terrorist attack that claimed 104 lives in Ankara two weeks ago. ISIS, which wants to target Turkey, is in search of new attacks in the country. Last week, four suicides bombers entering Turkey over the Syrian border alarmed Turkish security forces.

Turkey must remove ISIS from its border to avoid its attacks. That is why it has been arguing for the establishment of an ISIS-free zone in the northern Syria for a long time. The establishment of such a zone will both remove ISIS from the Turkish border and will enable Turkey to move its refugee camps to Syria. The move of camps to a terror-free zone is of vital importance for Ankara, which has found that Syrian intelligence agency al-Muhabarat infiltrated the camps in Turkey and seeks to attack the country in cooperation with ISIS.
Last Update: Oct 26, 2015 2:13 am
RELATED TOPICS