Why Turkey kicked DAESH out of Jarablus 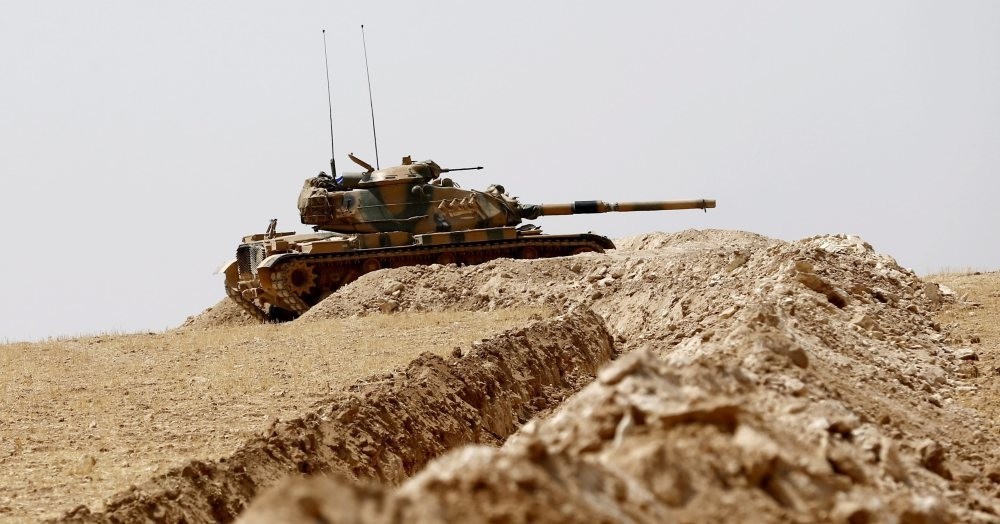 Turkish soldiers waiting their tanks as they prepare for a military operation on the Syrian border as part of their offensive against DAESH in Syria, the Karkamu0131u015f district of Turkey's southeastern Gaziantep province, Aug. 27.
by Yahya Bostan Aug 29, 2016 12:00 am

Since 2011, Syrian dictator Bashar Assad's oppressive policies have destabilized his country and have created at least three threats against Turkey's national security.

The first threat is related to the PKK, a globally recognized terrorist organization that has killed tens of thousands of Turkish citizens since the early 1980s. Under the pretext of fighting DAESH, the PKK's Syrian franchises, the Democratic Union Party (PYD) and the People's Protection Units (YPG), sought westward expansion across the Turkish-Syrian border. In addition to placing Syria's territorial integrity at risk, the group forced the predominantly Arab and Turkmen population of newly seized territories into exile. In October 2015, Amnesty International famously accused the YPG of perpetrating war crimes in Tal Abyad. The group's stated goal of forming a PKK-controlled state entity stretching from Northern Iraq to the Eastern Mediterranean, Turkey assessed, would cause long-term instability across its southern border.

In recent months, the PYD/YPG's organic ties to the PKK evolved into active support for terror attacks in Turkey, proving Ankara right. At the same time, the government was alarmed by the fact that the PKK had used weapons and ammunition, originally delivered to the YPG by the United States and Germany as part of the anti-DAESH campaign, against its citizens - meaning NATO weapons were being used by terrorists to target a NATO ally. To make matters worse, the YPG secured some level of support from Moscow after Turkey downed a Russian military jet in November 2015.

Against the backdrop of the above-mentioned developments, Turkey publicly identified the Euphrates river as a red line for the YPG's westward expansion. Under the umbrella of the Syrian Democratic Forces, YPG militants crossed the river to capture Manbij in an effort to gain total control over Turkey's southern flank. At the same time, the PKK stepped up its violent campaign in Turkey. Since the July 15 coup attempt, the terrorist group has perpetrated a number of attacks straight from the DAESH playbook - suicide attacks and car bombs - to kill more than 100 people, including 19 civilians, and injured close to 600 Turkish citizens. Having walked out of disarmament talks with Turkey to distract attention from the YPG's secret agenda, the group has resorted to the same tactic to help its Syrian franchise gain total control over northern Syria.

DAESH was the second national security threat born out of the Syrian civil war. Over the years, Turkey has been targeted more times by terrorists than any other country. Having lost more than 100 citizens in DAESH assaults in Suruç, Ankara and Istanbul, the country suffered another bloody attack last week as 51 people attending a wedding party in Gaziantep were killed by a suicide bomber. Simply put, Turkey had no choice but to remove DAESH from the border to protect itself.

The third and final threat was a new wave of refugees making their way to Turkey, which already hosts close to 3 million Syrian war victims. Keeping in mind that instability fueled by prolonged civil war leads more people to leave for Europe, the heavy clashes in Aleppo could have led to additional pressures on Turkey and the European Union. In response to the growing threat, Turkey maintained that refugees should be kept in Syria rather than being allowed to cross the border. The choice, a Turkish official noted, was between "risking 1 million additional Syrian refugees making their way to Europe" and "creating a safe zone in northern Syria to address the refugee community's needs within their own country."

Creating a safe zone stretching from the Euphrates river to the YPG-controlled Afrin made it possible for Turkey to address three national security threats with a single plan. The proposed zone, at least 30 kilometers deep, would be enforced by the Free Syrian Army backed by Turkey and the international coalition. It would not only make it possible for Turkey to absorb new refugee waves but also stop the PKK from hijacking northern Syria. At the same time, the plan promised to prevent future transgressions against native communities.

Although President Recep Tayyip Erdoğan and other Turkish leaders repeatedly called for the creating of a safe zone, the United States neither turned the proposal down nor allowed it to proceed - like they did with the Train-and-Equip program. Time and again, Washington came up with new excuses to delay Turkey's plans. When the plan finally got the go-ahead in October 2015, Turkey notified Russian President Vladimir Putin, who promised that Moscow's reaction would be limited to a strongly worded statement. According to sources, he also told the Turks that they were surprised by Washington's eagerness to help the PKK create a corridor across the Turkish-Syrian border. But Turkey had to shelf the plan when the jet crisis erupted in November 2015.

Last week, the Turkish Armed Forces (TSK) launched operation Euphrates Shield to address the above-mentioned national security threats. One year later than planned, Turkey dispatched tanks, armored vehicles, jets and the special forces to assist the Free Syrian Army's (FSA) campaign against DAESH. The U.S.-led coalition also provided air cover to the moderates fighting the terrorist group. In the end, it took 12 hours for the Turkey-backed forces to liberate Jarablus from DAESH, thereby ending the YPG's monopoly as the only reliable ground force capable of defeating DAESH. To put things in perspective, it took two months for the YPG to gain control over Manbij. Over the next days, FSA fighters will charge westward to remove DAESH from the Turkish border, while defending themselves against the YPG - which targeted Turkish troops and the FSA to keep the area under their control and, on Saturday, destroyed two Turkish tanks with anti-tank missiles ostensibly supplied by Germany.
Last Update: Aug 29, 2016 1:27 am
RELATED TOPICS