YPG must be kicked out of Afrin, Manbij before Mosul falls 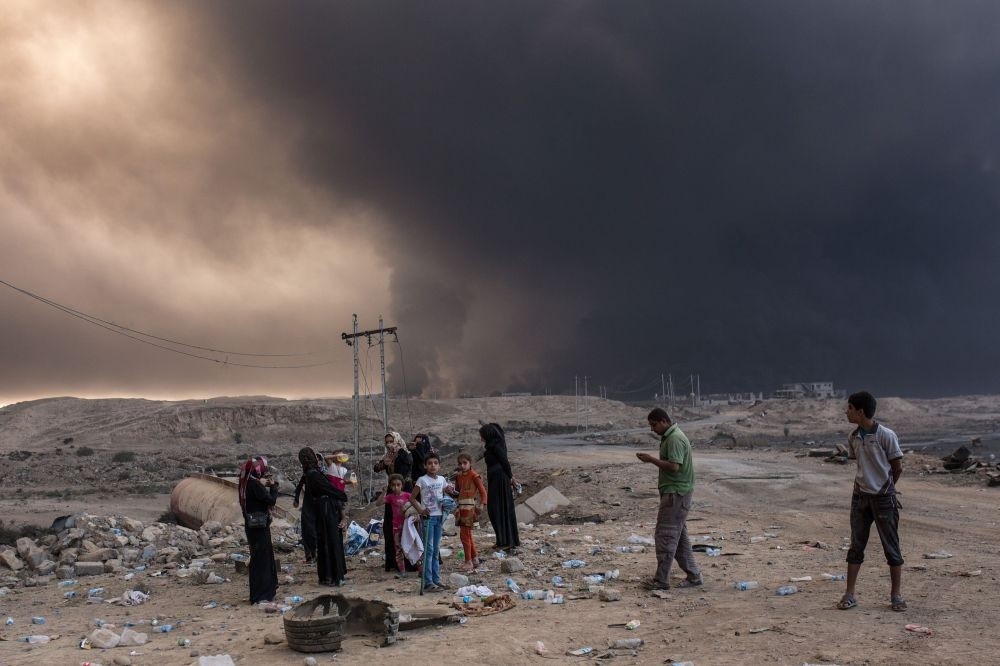 Iraqi villagers gather on a road as smoke rises from the Qayyarah area, southern Mosul, Oct. 19, 2016, during an operation against Daesh terrorists to retake the main hub city.
by Yahya Bostan Oct 21, 2016 12:00 am

Seeking to create a safe zone in northern Syria to seal the border and prevent illegal immigration, Turkey has no choice but to eliminate the YPG threat before Daesh militants leave Mosul for Raqqa and al-Bab

The battle for Mosul, which kicked off on Oct. 16 to liberate Iraq's second largest city from Daesh, causes multiple concerns. It remains unclear whether the civilian population will be harmed as a result of the operation. If Daesh choose to resist, there would be nothing stopping them from using chemical weapons. At the same time, al-Hashd al-Shaabi basically represents a Shiite version of Daesh. Keeping in mind that the two groups are equally capable of senseless violence, many observers are worried that they, coupled with sectarian Shiite forces within the Iraqi army, could start a region-wide sectarian war in Mosul.

Growing sectarian tensions in the region, among other developments, represent a serious security threat to Turkey - which is why policy makers in Ankara are closely monitoring the situation in Mosul. Against the backdrop of Baghdad's complaints, Turkey and the United States have reached an agreement to secure the participation of Turkish jets in the Mosul operation. Furthermore, Turkish troops remain at Camp Bashiqa, as Turkish-trained Nineveh volunteers fight Daesh on the city's outskirts.

To be clear, there are a number of tactical and strategic problems with the Mosul operation. One of the most serious concerns relates to Syria. According to Russian officials, the operation's planners created a corridor south of Mosul to facilitate the evacuation of terrorists from the area and minimize civilian casualties. However, the plan would effectively lead to a stronger Daesh presence in Raqqa and, possibly, al-Bab - which could place Turkey's Operation Euphrates Shield at risk. With Turkish-backed Free Syrian Army (FSA) forces advancing toward al-Bab after liberating Dabiq and President Recep Tayyip Erdoğan offering to work with the U.S. to liberate Raqqa, the movement of terrorists from Iraq to Syria could be a serious problem.

Under the circumstances, Turkey will have to focus on defeating Daesh in northern Syria especially now the operation to liberate Mosul is underway. The main obstacle before further Turkish engagement is the People's Protection Units (YPG), the PKK's Syrian franchise - which Turkey considers a terrorist organization and Washington treats like an ally.

On both sides of the Turkish-enforced safe zone in northern Syria, YPG forces maintain control. Having claimed Manbij on June, the group crossed the Euphrates -a Turkish red line- and took an important step toward creating a corridor extending from Afrin in the West and Kobani in the East. To strengthen their control over newly-conquered territories, the YPG forces in the past committed war crimes including forced migration of rival Kurdish groups and non-Kurdish communities.

What stopped the YPG in its tracks was Operation Euphrates Shield - which angered the terrorists and led them to target FSA forces fighting Daesh in the area. As the moderate rebels were trying to liberate Dabiq, the YPG started firing at FSA positions and moving eastward toward al-Bab. In other words, the YPG's aggressive expansionism fueled tensions between the group and FSA forces. In response, Turkish jets launched airstrikes against YPG positions and killed an estimated 200 militants.

What happened in recent days suggests that the YPG represents a national security threat not only in Manbij and but also Afrin. Seeking to create a safe zone in northern Syria to seal the border and prevent illegal immigration, Turkey has no choice but to eliminate the YPG threat before Daesh militants leave Mosul for Raqqa and al-Bab. At this point, the FSA forces are compelled to kick the YPG out of Afrin and Manbij.