Is Turkey moving away from democracy? 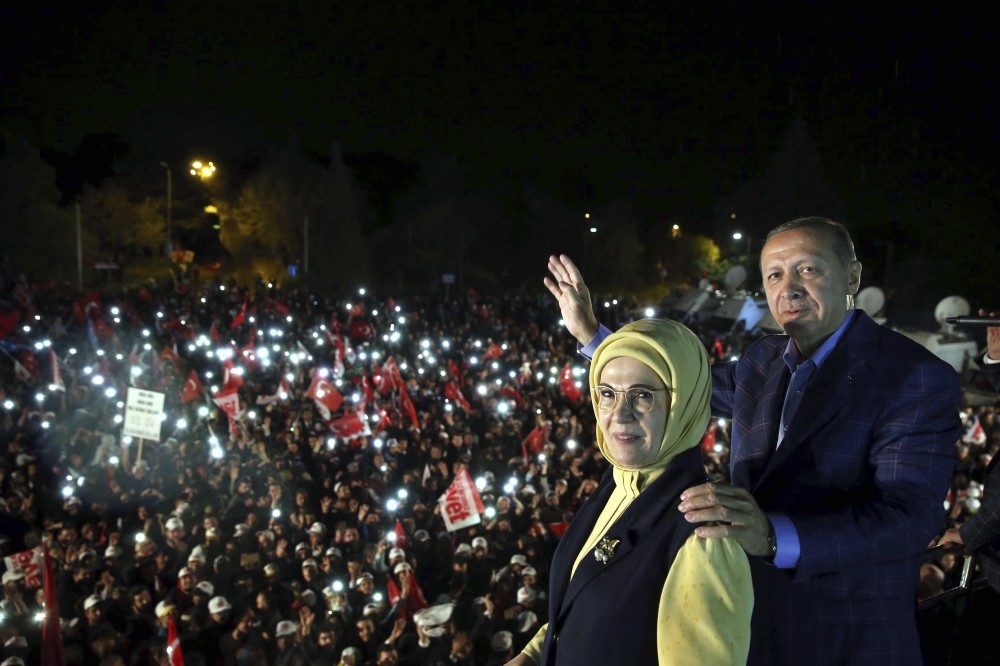 President Recep Tayyip Erdou011fan and his wife Emine Erdou011fan posing for photos with cheering supporters in the background after unofficial referendum results resulted in the u201cyesu201d vote's victroy, Istanbul, April 16.
by Yahya Bostan Apr 18, 2017 12:00 am

On Sunday, Turkey held a historic constitutional referendum to adopt a presidential system of government. The unofficial results were remarkably similar to last year's Brexit vote: While 51.4 percent of voters supported the constitutional reform bill, the remaining 48.6 percent voted against the proposal. An estimated 85.3 percent of all registered voters in the country participated in the contest. All in all, Sunday's vote represents an important milestone in Turkish political history.

Over the next months and years, we will have plenty of time to engage in lengthy discussions about the presidential system's advantages and disadvantages. However, I would like to touch upon a claim today that the Turkish opposition has repeatedly made on the campaign trail and a small number of European experts and policymakers appear to have accepted as fact: Turkey has moved away from democracy by adopting a new system of government.

The Turkish people, they claim, have sided with authoritarianism. Turkey's century-old democracy, a Western commentator even suggested, was dead. But are their concerns valid?

Let me pause here and acknowledge that many people who make the above argument against constitutional reform have been blinded by anti-Erdoğanism, Islamophobia and xenophobia and seem to believe that no society other than themselves can be democratic. And I do understand that they won't be interested in hearing the other side of the story that they are eager to tell.

In recent years, it has been virtually impossible to communicate with individuals who fundamentally believe that Turkey is just another Middle Eastern country and assume that Westerners have the right to not keep their promises to the Turks. But it is nonetheless important that anyone who hasn't been tainted by Islamophobia to hear why so many self-proclaimed Turkey experts are dead wrong.

Before I answer the question, I would like to highlight the single most important aspect of Turkey's new system of government. The proposal that more than 25 million Turks backed on Sunday was quite similar to Italy's 2014 ban on coalition governments. Moving forward, the amendments will strengthen the country's political institutions and promote long-term stability, while creating a clear timeline for future elections and making the economy and national politics more predictable.

As for whether Turkey is moving away from democracy, it is important to establish that the individuals who make this claim do not seem to have a deep understanding of Turkish politics. Here's why: If they had taken a quick look at the country's history, they would have known that Turkish democracy suffered severe setbacks under weak coalition governments and during periods of political fragmentation. By contrast, both democratic institutions and the economy fared better under single-party governments.

In the decade that followed the 1950 elections and Turkey's transition into multi-party democracy, the Democratic Party, led by Prime Minister Adnan Menderes, took successful steps to strengthen democratic institutions and promote economic growth. In the 1980s, Turgut Özal's governments oversaw a similar process, as Turkey integrated into the world economy thanks to liberal economic reforms. Finally, successive Justice and Development Party (AK Party) governments, since 2003, were able to take the country to the next level mainly due to political stability. In all three cases, the driving force behind Turkey's success was the power of civilian politics at the expense of the extra-parliamentary opposition, including the military guardianship regime.

When political institutions were exceptionally weak, by contrast, the country experienced serious problems. In the 1990s, there was a visible uptick in unsolved murders, human rights violations and other transgressions. Under the parliamentary system, the weakness of elected governments translated into unchecked power for extra-parliamentary players. In other words, parliamentarism was an impediment on Turkish democracy.Under the presidential system, there is no room for weak coalition governments, since Turkish voters will elect future presidents, who will preside over the executive branch for the next five years and will be up for re-election when their term is up. Whether or not a given politician will be able to secure re-election will depend solely on the people.

In the past, the guardianship regime was able to seize political power and undermine democratic institutions because they had no obligation to meet popular demand. By contrast, the newly-adopted system of government ensures that the people who run the country cannot afford to ignore the people – unless they are prepared to pay for their actions on election day.

Simply put, the presidential system won't move Turkey away from democracy – unless you are a fan of ignoring cold, hard facts and shaping your opinions based on prejudices. Once the new system starts running, the Turkish democracy will heal from past wounds and become more resilient against future assaults and challenges.
Last Update: Apr 18, 2017 1:25 am
RELATED TOPICS