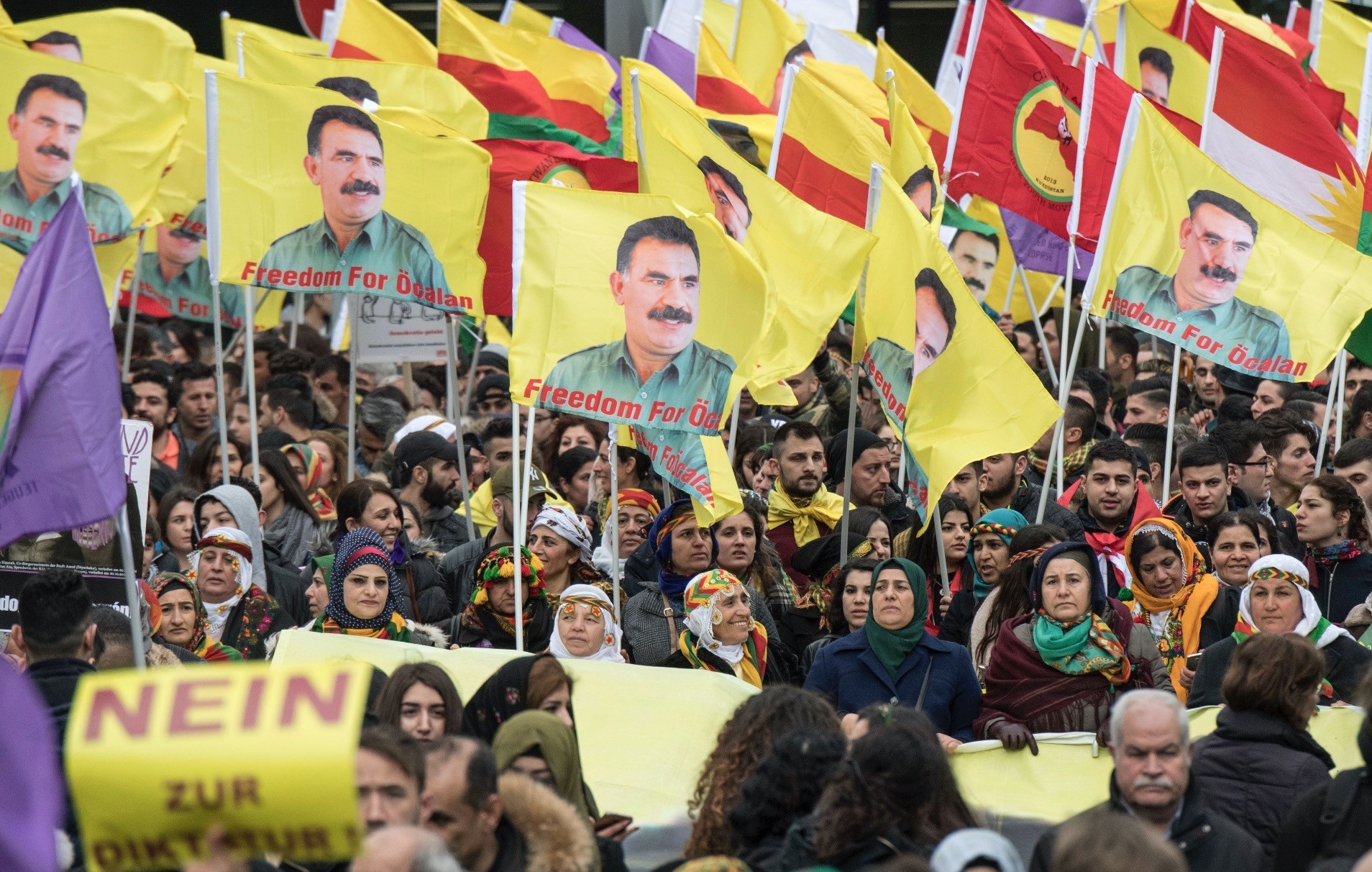 PKK terrorist group supporters seen in Frankfurt, Germany waving flags with portraits of the imprisoned PKK leader Abdullah u00d6calan, who is responsible for killing hundreds of Kurdish and Turkish civilians and security forces, March 18.
by Yahya Bostan Apr 24, 2017 12:00 am

Turkey-EU relations just hit at an all-time low. Ahead of the April 16 constitutional referendum, EU countries tried to meddle in the historic vote by openly siding with the "no" campaign. As part of their efforts to stop constitutional reform, the Dutch government denied landing rights to Foreign Minister Mevlüt Çavuşoğlu and prevented Family and Social Policies Minister Fatma Betül Sayan Kaya from accessing the Turkish consulate in Rotterdam. In violation of diplomatic conventions, Mrs. Kaya was kept in a vehicle for six hours. What happened was an act of aggression to which even representatives of hostile nations are not subjected. At the same time, Germany has taken a number of steps to impose arbitrary bans on public appearances by members of the Justice and Development Party (AK Party).

Meanwhile, the European Parliament, at the request of a Dutch MEP, imposed a ban on the distribution of Daily Sabah on their premises. What happened over the past few months fueled an unprecedented level of tension between Ankara and Brussels.

However, Europe's approach to the referendum alone would not be enough to account for what is happening. In truth, the Turks have believed for some time that the European Union hasn't been honest with them. For example, Brussels has clearly failed to support Turkey's counter-terrorism campaign as members of the PKK, an armed group that Turkey and the EU consider a terrorist organization, have been granted safe haven in European capitals. In Germany alone, the group is believed to have more than 3,000 militants – regarding whose extradition the German authorities have refused to take action.

To make matters worse, the Gülenist Terror Group (FETÖ), the terrorist group that was responsible for last summer's coup attempt in Turkey, followed the PKK's example of hiding in European countries, who have been unwilling to send them back to Turkey. We're not talking about a legal grey area either: Even the coup plotters, who escaped to Greece aboard a military helicopter after the coup attempt's failure, haven't been handed over to the Turkish authorities. Obviously, none of the above is acceptable.

Nor is the EU's perceived hypocrisy limited to counter-terrorism. The Turks have been visibly frustrated with Europe's failure to live up to their commitments regarding Syrian refugees and visa-free travel. The Turkey-EU refugee deal, which was signed in March 2016, remains in effect with Ankara holding up its end of the bargain. However, EU countries are still yet to deliver on their promises: Although Brussels pledged up to 6 billion euros in financial aid to Syrian refugees in Turkey, the actual contribution has been 677 million euros – just over 10 percent of what was promised. Furthermore, the EU had made a commitment to visa liberalization for Turkish citizens by June 2016. Even though citizens of Georgia, which isn't even a candidate country, have been granted visa-free travel, the Turks are still being kept in the waiting room.

There are a number of other issues causing tensions between Ankara and Brussels, but the current crisis ultimately boils down to the fact that the European Union has been stalling the Turks. Nowadays, the Turkish government understandably is asking whether any other country has been waiting for 53 years to attain EU membership. Unfortunately, Turkey alone has been treated with such disrespect.

It goes without saying that the Europeans, too, know deep down that their current relationship with Turkey is unsustainable. Until now, neither Brussels nor Ankara wanted to take the fall for ending the talks. But things have changed since Turkey initiated the process.

At a time when xenophobia and right-wing extremism are increasingly popular in Europe and the very idea of a united Europe has been questioned in Brexit's wake, nobody seriously expects Brussels to make a commitment to a closer partnership with Turkey. Nor should the Turks be expected to take a leap of faith and ignore that the EU, now weaker than ever, cannot make a positive contribution to their country.

Moving forward, where is the relationship going? Ahead of the April 16 referendum, Turkish politicians pledged to have a serious conversation with the European Union. Noting that the membership talks could not continue like this, President Recep Tayyip Erdoğan suggested that a referendum could be held to let the people decide the fate of membership talks. Based on my conversations with senior Turkish officials, this is where the Turks stand right now: Turkey will hold a final meeting with the European Union in order to address pressing problems. They will expect the Europeans to take concrete steps rather than come up with open-ended responses. Unless an agreement can be reached, a referendum will be held in Turkey to ask the people if they wish to abort membership talks. If the people call on the Turkish government to stop the talks, Ankara will try to develop a new kind of relationship with Europe that doesn't entail EU membership. One way or another, the moment of truth is fast approaching.