New reforms on the onset of AK Party's third period 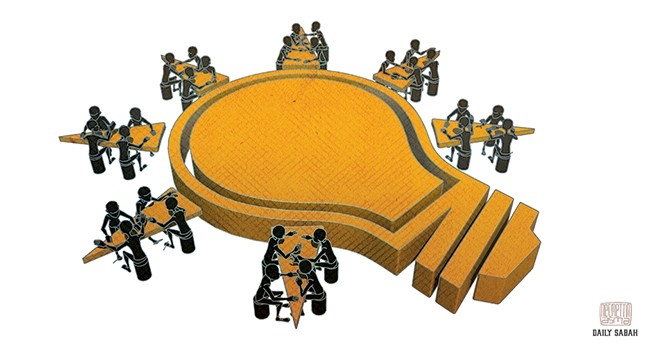 I recollect my senior year in college when Turkey was grappling with enormous difficulties. The ruling parties fell short of coming up with a solution to the profound economic problems while spending all their energy on debates in the Cabinet. Turkey was in need of a new story in order to recover socially, politically and economically. During the years I pursued my academic studies after graduation, I had an opportunity to closely follow the foundation of the Justice and Development Party (AK Party), which emerged as a representative of the larger societal strata. I observed how it came to power alone despite the establishment and endured an uphill struggle against the military tutelage to remain in power.

During those years, AK Party administrators comprehended that the only way to remain in power was to transform the existing system, which remained obsolete and undermined those elected. Focusing on the EU membership negotiations during its first years in power, the AK Party marked unprecedented reforms in Turkey. Recovering society, politics and economy, these reforms improved the country's democracy while transforming Turkey's texture in a positive way. During this period, the AK Party overcame a coup threat, confronting the April 27 military memorandum. However, it resisted sharing the ruling power with non-political agents and power elites. The party did not take a step back regardless of the problems it faced. It managed to adapt itself to the new conjuncture and finally transformed the obsolete system.

Another period started in 2011 during which the AK Party reduced the influence of the military tutelage to a certain degree and settled military-civilian relations on democratic standards. However, during this period, another force that was more dangerous and shady ventured to replace the military tutelage. This force was the Gülenist Terror Group (FETÖ). FETÖ is a far more dangerous and larger-scale structure compared to the military tutelage with its secret and deep organizational network. The limits and capabilities of the military tutelage and the possible danger it can pose to Turkish democracy is predictable while the profoundity of FETÖ's influence and its infiltrations in the state institutions are beyond unpredictable. It is not possible to predict who is a disciple of a twisted mind disguised as a Muslim cleric who claims to be the Mahdi. Due to the secretive character of FETÖ, the atrocious coup attempt on July 15, 2016 was not forecast.

In this sense, the AK Party's history as the ruling party of Turkey can be divided into three periods. During the first period, which began with the party's coming to power for the first time and continued until 2011, Turkey went through a phase of democratization while a fight was being conducted against the military tutelage and the establishment. The second period was invested in a fight against a more shady power group. Contrary to common belief, the fight against FETÖ was kicked off not on Dec. 17, 2013, but when Gülenists attempted to connect the ODA TV case, which was opened by Gülenist forces against dissident journalists, to a murder with conspiracy. On Feb. 7, 2012, the anti-FETÖ fight was triggered with Gülenists' effort to launch an operation on the Turkish National Intelligence Organization (MIT), and a comprehensive fight against FETÖ was initiated with the Dec. 17 process. From 2011 to July 15, 2016, a fight was conducted against FETÖ. Within this period, the AK Party was confronted with coup attempts and forced to lean toward protectionist policies and postpone its reforms. During this time period, the AK Party can be said to have fallen into this trap and compromised on its reformist identity.

The AK Party's history of ruling Turkey entered its third period with the July 15 coup attempt. Both the AK Party and Turkey could repel the coup attempt, which was organized by the Gülen militants infiltrated in the Turkish Armed Forces, thanks to the Turkish people who poured onto the streets to resist. It is essential to properly assess the vision displayed by the AK Party along with the Nationalist Movement Party (MHP) in the aftermath of the coup attempt. Despite the atrocious insurrection, 249 casualties, and the assaults by terrorist groups, the mistake made in the second period was not repeated, and a system change was introduced with radical reform instead of adopting a withdrawn stance. The acceptance of the presidential government system in the April 16 referendum was significant in this respect.

Why did I say all this? The third emergency congress of the AK Party was organized on Sunday, during which President Recep Tayyip Erdoğan was elected as the chairman of the party by exercising a right granted to him with the constitutional amendments adopted after the April 16 referendum. Now, political analysts frequently ask this question: "How will Turkey and Turkish politics be affected by Erdoğan's chairmanship?"

I have already answered this question with the analysis I made above. In my opinion, the AK Party is exerting the utmost effort to get out of the vicious circle it was pushed into after 2011, and has adopted a reformist vision again by departing its introverted stance. I believe that during the party's third period, which began with July 15 and was sealed with the emergency congress, the political system will become more institutionalized and the AK Party will readopt a reformist identity reminiscent of its first period with the power vested by the presidential government system.