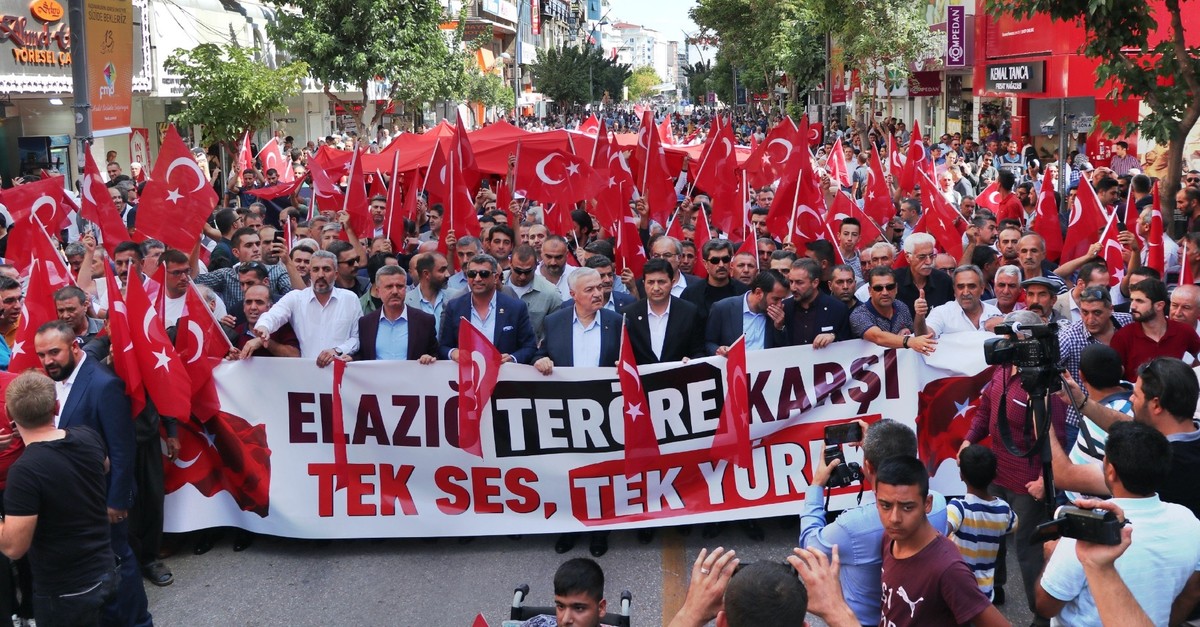 A group of Kurdish families has been protesting in Diyarbakır for some time. They sit outside the local offices of the Peoples' Democratic Party (HDP) and voice their frustration with the PKK terrorist organization. The protest began on Aug. 22, when Hacire Akar went to the HDP offices and demanded her son back. Akar's persistence led to her son's release and encouraged other parents, whose children either joined the PKK or were forcibly recruited, to also protest.

The HDP's Diyarbakır office has since attracted concerned parents like a magnet. The number of families participating in the protest grows each day. What exactly do these parents want? Is the Turkish government directing them, as claimed by the HDP? Judging by their statements, the parents have a very simple demand: They do not want their children to die. They want their kids to stay by their sides rather than stay in the mountains. They do not condone the PKK's violent campaign. Why didn't they speak up in the past? In truth, a group of Kurdish mothers from Diyarbakır had staged a similar protest back in 2014. Claiming that PKK had forcibly recruited their children, concerned parents had stormed the local offices of HDP's predecessor, the Peace and Democracy Party (BDP), in a desperate attempt to save their children.

That protest ultimately failed due to a lack of public support and an uptick in PKK attacks.

Diyarbakır's mothers have begun to speak up as security operations cripple PKK terrorists and mitigate the threat of retaliation. It is noteworthy that one of the participating fathers told reporters that he did not want his son "to become a terrorist." When the PKK escalates violence parents are compelled to keep silent out of fear for their own lives and due to mounting "neighborhood pressure."

In other words, this is why the mothers in Diyarbakır are speaking up today. The current protest is the product of an effective counterterrorism campaign that pinned down PKK militants and reduced the number of new recruits to nearly zero. Interior Minister Süleyman Soylu announced in May that the number of new recruits had decreased from 5,556 to just 38 in the first five months of 2019.

But why protest outside the HDP's provincial headquarters? The families blame the party, saying that their children walked through the HDP's door, never to be seen again. The local police reached similar conclusions. The HDP denies the allegation, yet former PKK militants regularly tell the police that the HDP plays a key role in PKK recruitment efforts.

The following excerpts from actual testimonies address the links between the HDP and PKK recruiters: "I went to the HDP's local offices to meet X. There, I spoke with him and asked him to send me to the PKK." "I first went to the HDP's county headquarters to join the PKK. My goal was to participate in the clashes in Syria." "I decided to join the PKK because my family did not consent to my marriage with the girl I loved. I was aware that HDP's local offices helped people join the organization. So I went to their provincial headquarters."

The reaction of Diyarbakır's mothers against PKK terrorists will have many political consequences in the future. This is indeed a turning point. It would appear that the protest unleashed anger, which had been building up below the surface, against the PKK. The HDP could find itself on the receiving end of the same angry reaction and lose its public support rapidly if it fails to distance itself from the PKK.