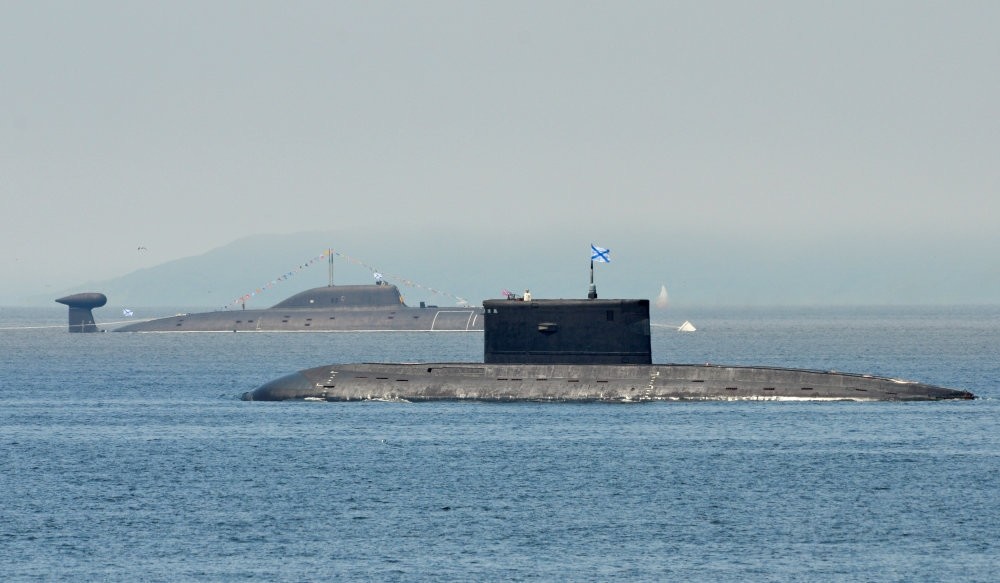 Submarines sail during a rehearsal. Turkey will export engineering services in submarine modernization, an area which requires high technology.
by daily sabah Aug 22, 2016 12:00 am

For the first time, Turkey is to export engineering services in submarine modernization, an area which requires high technology. Turkish Defense Technologies Engineering (STM), the principal partner of the Undersecretariat for Defense Industries, has won the tender on the modernization of Pakistan's French-made and Romania's British-made submarines.

The Turkish defense industry, which previously developed Pakistan's largest military supply vessel, has won a nearly $500 million worth of submarine modernization task in Pakistan and Romania. As a country which is already capable of modernizing its own submarines, Turkey will for the first time export engineering services in a high technology-requiring area.

STM competed with Chinese, British, French, Italian and American companies in the tenders which were initiated by Pakistan and Romania. STM's success in the construction of a military supply vessel, which was launched in the Karachi port a couple of days ago, played a great part in Pakistan's preference of Turkey in the $300 million worth of submarine modernization task. The designing and engineering work of the vessel was made in Turkey and the vessel was built in the Karachi Shipyard under the guidance of Turkish engineers.

A senior defense authority said the Pakistani submarine was built by France, and the French government came into play to help French companies win the tenders, adding, "Although Pakistan was pressurized, it did not take a step back and preferred Turkey for offering a more developed project." Stressing that Pakistan wants to have national vessels (MİLGEM), corvettes and ATAK helicopters developed by Turkey, he noted China offered to donate three helicopters to Pakistan to make the country give up the ATAK helicopters purchase. Pakistan also would like to join Turkey's fighter jet development program (FX), while Turkey takes interest in the military training aircraft project initiated by Pakistan.

The construction of Pakistan's largest military supply vessel, which is a product of Turkish designing and engineering activities, is full of interesting stories. The details of the vessel point to the current level Turkey has achieved in project, engineering, material and construction management. STM undertook the project's design, engineering, control and construction management, while 20 Turkish subordinate industrial companies produced the required materials and devices. The 155-meter-long vessel cost $90 million and is capable of carrying 15,600 tons of liquid and dry cargo, as well as transferring fuel, water, arms, ammunition and food to afloat battleships. It also has a hospital and a runway where two helicopters can land during a search and rescue operation. The vessel will also be equipped with defense and war systems.The first plate of the vessel was launched on Nov. 27, 2013, two months earlier than the scheduled time. STM's Karachi Manager Halil Baş is a retired naval officer and a shipbuilder who graduated from Istanbul Technical University. He stated: "Our team mainly consists of retired naval officer engineers and civilian technical staff. We better understand requirements and produce solutions accordingly - which is reflected in our success in tenders."

According to Baş, Turkey brought Pakistani engineers and workers, who participated in the project, to Turkey and trained them in the country. In the first eight-month phase, Baş worked as the only Turkish engineer in the Karachi Shipyard, but received quick support from Turkey when he needed.

With Pakistan's preference, Turkey has for the first time exported designing, engineering, training and consultancy services in the military vessel construction. This success will continue with the export of new modernization projects, MİLGEMs, corvettes, ATAK helicopters and FXs in the near future. STM General Manager Davut Yılmaz said: "In the past, German companies used to design vessels and send the necessary materials and we used to build our own military vessels in our own shipyards. Now, we are doing the same. This shows the point we have reached in designing, engineering and technology."
Last Update: Aug 28, 2016 1:52 pm
RELATED TOPICS