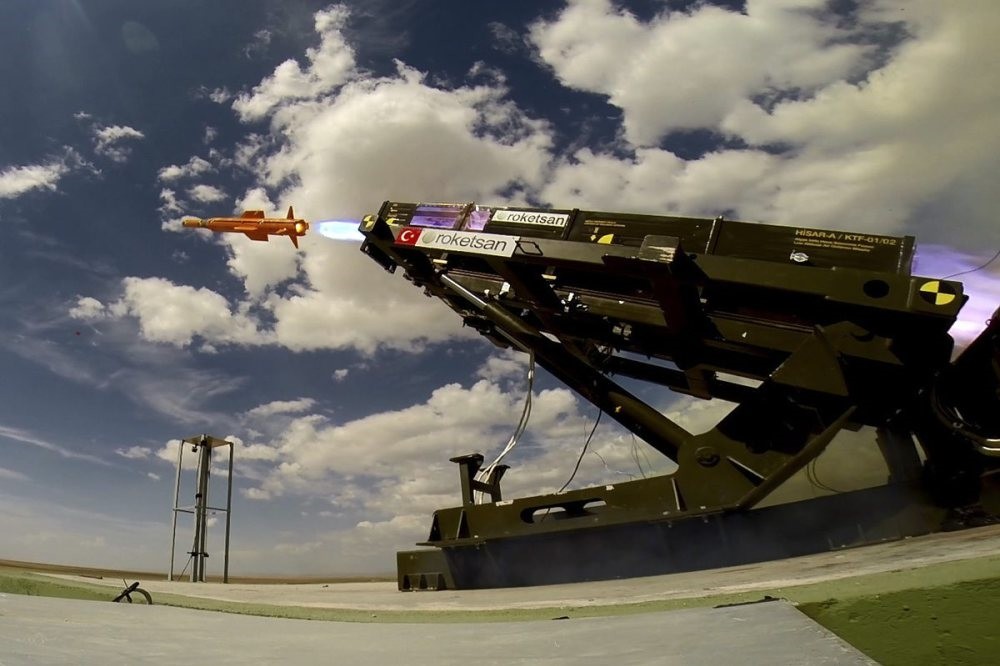 The Hisar-A air defense missile system successfully test-fired in the central province of Aksaray with the attendance of the national defense minister and other officials.
by Daily Sabah Feb 03, 2018 12:00 am

Over the last 15 years, Turkey's mobilization to increase the share of locally developed and manufactured defense systems and goods with a view to decreasing the country's dependency on foreign suppliers has flourished with helicopters, armed and unarmed unmanned air vehicles (UAVs), armored vehicles and missiles. The most recent example, the domestically developed low-altitude air defense missile system HİSAR-A successfully accomplished the test-fires.

The missile successfully test-fired in the central province of Aksaray, with the attendance of Ministry of National Defense and other officials Thursday.

During the test, the missile was successfully fired from the launch system and continued to fly with programmed maneuvers and completed the flight after the firing of the second pulse engine.

HİSAR missiles are defense weapons developed to protect military bases, ports, facilities and troops against air-based threats as well as to meet the needs of the TSK for a low and medium-altitude air defense security system.

In this context, HİSAR's radar, command and control and fire control systems were developed by ASELSAN, while ROKETSAN was responsible for the development of the missile system.

ROKETSAN is responsible for missile development, which is one of the important elements of HİSAR systems.

Turkey has been investing heavily in the defense industry and has substantially increased the number of defense projects over the last 15 years, while also increasing the rate of domestic production whereby local resources are used in the development of defense projects and equipment. The number of defense projects, which was 66 in 2002, has now increased to 600, while the size of these defense projects has reached $60 billion. External dependency, which was around 80 percent 16 years ago, has also rapidly declined with the nationalization of projects. The rate of meeting the needs with domestic resources has increased from 25 percent to more than 60 percent. Turkey's defense industry has around $6 billion in production and $2 billion in export capacity. With a view to securing its borders against terror threats from northern Syria, Turkey launched Operation Olive Branch in the northwestern Syrian region of Afrin to eliminate risks posed by the PKK terrorist organization's Syrian affiliate, the Democratic Union Party (PYD), its armed Peoples' Protection Units (YPG) and Daesh.

Since the first day of the operation on Jan. 20, Turkey has been using, to a significant extent, domestically developed military vehicles, arms and ammunition, including an indigenous radar jammer, T-155 Fırtına self-propelled howitzers, Kirpi (Turkish for "Hedgehog"), which is a locally produced mine-resistant ambush protected vehicle, multiple rocket launchers, ATAK Advanced Attack and Tactical Reconnaissance helicopters and precision guided kits.

Moreover, equipped with state-of-the-art technologies, domestically developed UAVs are being deployed in the Afrin offensive. Selçuk Bayraktar, the technical manager at the BAYKAR Makine UAV manufacturing company, said on his social media account that for the first time, newly developed technologies were used in a military operation. He said the national UAVs were on duty in Afrin, adding that he and his technical team were on the field to support the TSK. Prime Minister Binali Yıldırım said on the first day of the Afrin offensive that 70-75 percent of the used ammunition was domestically made and that the most important weapon being used in the offensive was domestically made UAVs.