Friction in US over S-400, F-35 requires better dialogue with Ankara 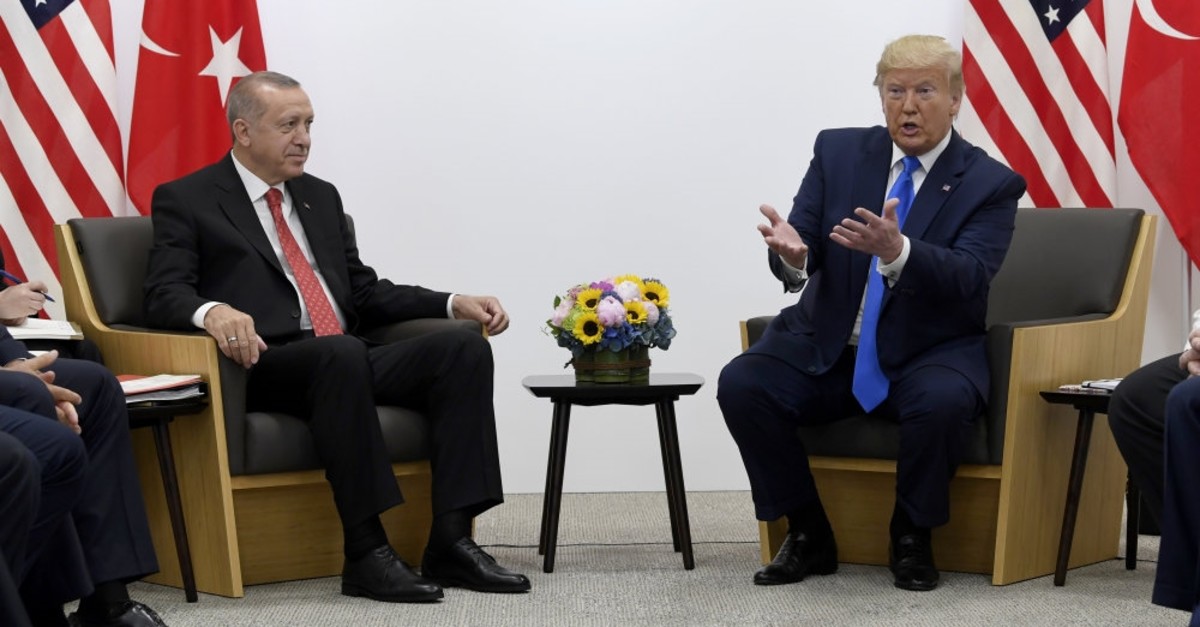 Ankara's purchase of the Russian-made S-400 missile system has not only expanded Turkey's capability for military deterrence but also led its U.S. partners to open a new phase of negotiations

U.S. President Donald Trump in the last year has been sympathetic to Turkey's decision to buy the Russian S-400 defense system and the country's security needs as opposed to the consistent threats and warnings from the U.S. State Department and Pentagon to remove Turkey from the F-35 program and the halting of the deliveries of the jets for which Turkey has paid $1.4 billion so far because of Ankara's purchase. After a public and supportive statement concerning Turkey's situation, which he described was the result of his predecessor Barack Obama's policies, during G20 meeting with President Recep Tayyip Erdoğan in late June, the U.S. president said on Tuesday that the current situation with Turkey over the F-35 jets was not fair, as the country had wanted to buy the U.S. Patriot missiles before but Washington had refused at the time.

"The situation with Turkey is very complex and tough. We are in contact with Turkish officials," he said, expressing his reluctance to punish Turkey over its acquisition. Turkey's strongly decisive attitude and diplomatic efforts have underscored the country's need for an air defense system and there is no turning back from the S-400 deal with Russia since the agreement was inked in 2017. This commitment to prioritizing national security and augmenting its defense capability with the most advanced missile defense system in the market has compelled Turkey's partners in the U.S. to weigh options and develop better dialogue with Ankara, a strategic ally.

Turkey and U.S. relations have grown sourer in the last four years when the latter supplied massive arms and ammunition supplies for terror groups in northern Syria – groups that pose grave threats to Turkey's national security. With a view to expanding its defense capability against increasing security threats in the region, Turkey decided to buy an air defense missile system, but the U.S., a NATO partner, refused to sell such a system to Turkey in the first place.

Seizing the opportunity of a better and attractive offer from Russia, Turkey opted to purchase a Russian-made S-400 surface-to-air missile (SAM) system in December 2017. The U.S. State Department and Pentagon have opposed this purchase and threatened Turkey, a NATO ally, of removing it from the multinational F-35 stealth fighter jet program, as well as imposing a set of sanctions on the country.

At the cabinet meeting on Tuesday, Trump said the U.S. repeatedly turned down Turkey's requests to purchase the Patriot missile systems in the past and that the whole situation was unfair. Trump again appeared to blame his predecessor, Obama, for failing to sell America's best alternative to the Russian S-400s, the Patriot missiles, made by the Raytheon corporation. He said Turkey was "forced to buy another missile system."

When Obama supplied massive arms supplies for the People's Protection Units (YPG), the Syrian affiliate of the PKK terror group, a U.S. and EU-designated terror group that has been threatening Turkish national security for the last four decades and killed thousands of civilians and soldiers in the country, in late 2015 as part of a train-and-equip program in the fight against Daesh, Turkish-American relations witnessed a new low point. Despite Turkey's numerous efforts to buy air defense system from its 67-year NATO ally during Obama's term, the U.S. Congress declined the offer for the sale of the Patriot PAC-3 batteries worth $7.8 billion at the time. Not selling the necessary missile systems to its NATO ally, Washington continued to provide extensive arms support to terror groups in Syria that have continuously attacked Turkey and claimed hundreds of lives. In January, the U.S. made an official offer to Turkey for a $3.5 billion sale of the Patriot missile and air defense systems during the visit of a U.S. delegation.

"All of a sudden, everybody started rushing in saying to Turkey, okay, we'll sell you the Patriot missile," Trump said.

"Because of the fact that (Turkey) bought a Russian missile, we're not allowed to sell them billions of dollars' worth of aircraft. It's not a fair situation," Trump said, lamenting the jobs that would be lost. He said Turkey ordered "substantially over" 100 F-35 planes and plans to order more but the U.S. would not sell the fighter jets after Ankara's purchase of the S-400s."Turkey is very good with us, very good, and we are now telling Turkey that because you have really been forced to buy another missile system, we're not going to sell you the F-35 fighter jets. It's a very tough situation that they're in, and it's a very tough situation that we've been placed in, the United States," Trump told reporters.

Contrary to Trump's statements, his nominee to lead the Defense Department said Tuesday that Turkey's acquisition of the advanced Russian S-400 anti-air missile system is "wrong" and "disappointing."

"They have been a long-standing and very capable NATO ally, but their decision on the S-400 is the wrong one and it is disappointing," said Mark Esper, testifying before the Senate Armed Services Committee.

Esper has a two-year recusal agreement, which obligates him to recuse himself from all matters that involve Raytheon while he is employed at the Pentagon. The agreement naturally includes the Patriot system as it is produced by the company.

The revelation comes as the Trump administration threatens to expel Turkey from the F-35 fighter program over its purchase of S-400s from Russia, warning the anti-missile system could be used by Moscow to covertly attain secret information on the stealth fighter jet.

Moreover, Secretary of State Mike Pompeo and Trump were reviewing all of the options that are in the Countering America's Adversaries Through Sanctions Act (CAATSA) legislation, State Department spokeswoman Morgan Ortagus said on Tuesday. "I think that we've been pretty clear what the ramifications could be and I think that you saw those ramifications today when the president talked about the inability of Turkey now to have the F-35," she said.

Turkey yesterday continued to receive components of the S-400 missile defense systems at the Mürted Air Base in Ankara, formerly known as Akıncı which was used as a base for putschist soldiers during the foiled coup attempt of July 15, 2016.

Delivery of the long-range air defense systems continued, with 14 shipments having so far landed in Turkey over the last six days.

The purchase of the Russian S-400 air defense system is a matter of Turkey's sovereignty, an independent Turkish lawmaker said yesterday. "This is a matter of Turkey's sovereignty, I am glad the S-400s are coming," Öztürk Yımaz, a lawmaker from eastern Ardahan province, told the journalists in Parliament. Yılmaz said he supports Turkey's firm stance on the purchase of the S-400 air defense system.

Commenting on the friction between the Trump administration and the State Department and Pentagon when it comes to the U.S. policy toward Turkey, professor Nurşin Ateşoğlu Güney, an international relations scholar at the Bahçeşehir Cyprus University, told Daily Sabah that Turkey's purchase of the Russian-made defense system S-400 has paved the way for opening a new phase of negotiations as it strengthened Turkey's leverage.

The S-400 purchase has boosted the military deterrence capability of Turkey in the region, Güney remarked. "The latest remarks from Washington demonstrate that Turkey's message was received by the American partners and all elements of the U.S. administration, the Congress, the Pentagon and the State Department along with Trump administration, have entered a period of pondering over new negotiations with Turkey," she continued. In addition to the sustained diplomatic dialogue, Turkey has also benefitted from its augmented military capacity with the purchase of S-400, Güney noted. "It is not possible for them to remove Turkey out of the NATO picture," the professor underscored.

"The S-400 deal with Russia has compelled the U.S. to find a midway for the negotiation of the existing issues between the two allies," Güney said. She referred to Turkey's iterative statements that the country is highly in need of an air defense system given the mounting security threats in the Middle East, Eastern Mediterranean and North Africa.

"The U.S. president, thanks to diplomatic efforts of Turkish officials, has realized the urgency of the matter for Turkey. Although the U.S. Congress has a legal obligation to start the process of CAATSA, which limits executive power, Trump could delay the process for a period of 180 days and implement only five article out of 12, in order not to lose Turkey since it is a very important strategic ally," the professor explained.