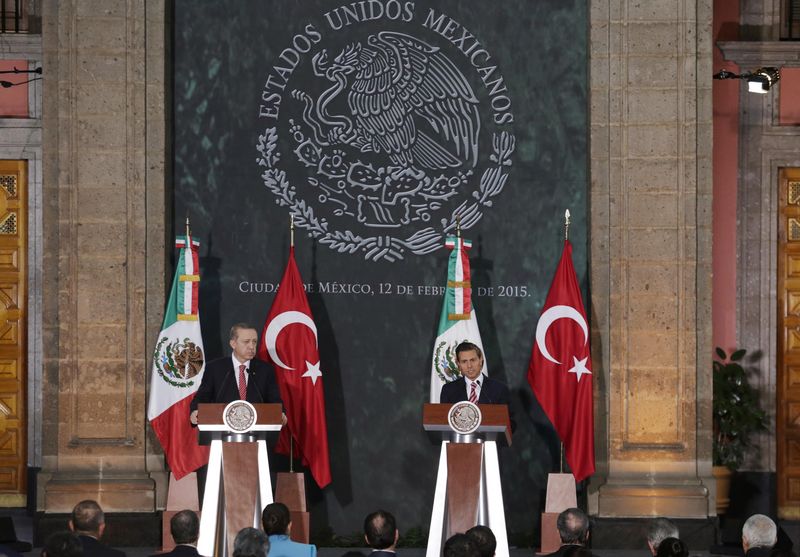 by Daily Sabah with AA Feb 13, 2015 12:00 am
Turkey and Mexico have the potential to increase their bilateral trade beyond $5 billion by 2023, President Recep Tayyip Erdoğan said Thursday. Addressing a press conference in the capital Mexico City after meeting his Mexican President Enrique Pena Nieto, Erdoğan said that only 12 years ago, the trade volume between the two countries was $1.2 million, and that now the current trade stands at $1.2 billion.

Erdoğan said Mexico was Turkey's biggest partner in Latin America and highlighted the importance of the free trade agreement between the two countries for realizing bilateral trade targets. He assured the full cooperation of Turkish officials to achieve these goals. He also said that Turkey hoped to sign a free trade agreement with member countries of the Pacific Alliance, of which Turkey is a non-member observer.

He also offered visa-free travel between the two countries and spoke about opening a new direct flight route between Turkey and Mexico. "We presented the necessary documents to Mr. President [Nieto] over this issue," Erdoğan said. He also said Turkey and Mexico were countries that took responsibility at multilateral platforms such as the U.N., the G20, the Organization for Economic Co-operation and Development and the Mexico, Indonesia, South Korea, Turkey and Australia group (MIKTA). Erdoğan also said that solidarity between the two countries could be enhanced via the Turkish International Cooperation and Development Agency (TİKA), which has 49 offices across the world. His Mexican counterpart appreciated this idea.

He recalled the Mexican president's visit to Turkey in 2013 and said they had a chance of evaluating bilateral ties. He thanked Nieto for his reception and hospitality.

In December 2013, Nieto visited Turkey at the invitation of former President Abdullah Gül. Mexico is Erdoğan's last destination on his Latin America tour, which seeks to boost business and cultural ties. Cuba was his second stop after Columbia.