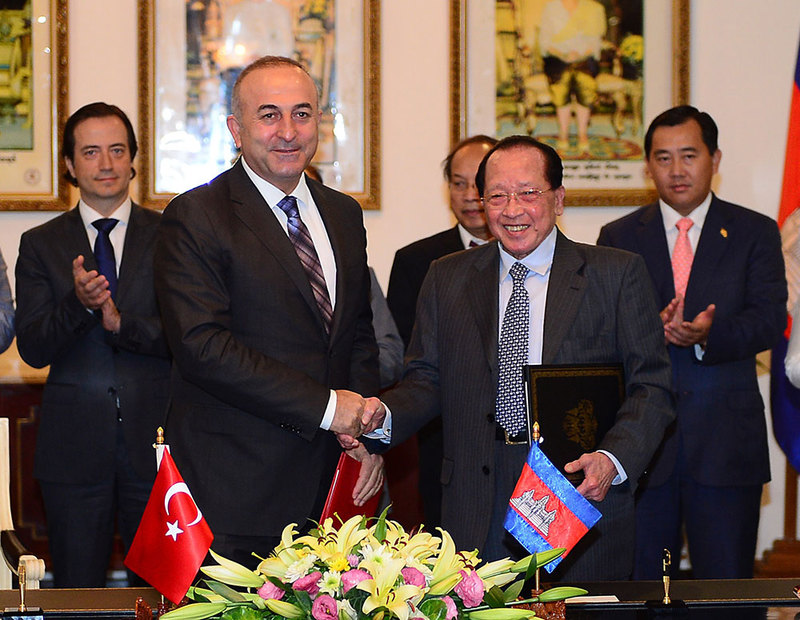 | Photo: AA
by Anadolu Agency Mar 16, 2015 12:00 am
The Turkish Foreign Minister held the first official talks with his Cambodian counterpart in Phnom Penh on Monday, expressing Turkey's support for Cambodia's application as an observer in the Organization for Islamic Cooperation (OIC).

Çavuşoğlu arrived in Cambodia on Saturday and officially opened the Turkish Embassy in Phnom Penh on Sunday evening, holding a joint dinner with delegates from both countries.

It is the first time a Turkish foreign diplomat has visited Cambodia in an official capacity since diplomatic relations were established in 1970.

"Today I held a meeting with the foreign minister of Turkey for the first time," Namhong said in a press conference at the ministry of foreign affairs. He added that discussions focused on "strengthening bilateral relations in every sphere," including increases in investment and economic partnerships and parliamentary relations.

Çavuşoğlu is to meet with National Assembly president Heng Samrin on Monday afternoon.

Namhong thanked Turkey for hosting the Junior Diplomats Program, which a member of Cambodia's foreign ministry will attend later this year after receiving a scholarship to go to Ankara.

In remarks to the media that largely echoed those of his counterpart, Çavuşoğlu lauded the two countries' "conciliatory relations," which he said had been bolstered with the signing of the visa exemption deal.

"As one of the fastest growing economies in Southeast Asia, Cambodia is a rising actor and an important partner for Turkey," he said, adding that Turkey supports Cambodia's observer status bid to join the OIC, which has around five percent Muslims.

"I will encourage Turkish Airlines to start its flights to Cambodia in the near future. It is seeking air rights in neighboring countries," Çavuşoğlu added, before renewing his invitation for Namhong and a Cambodian delegation to pay a visit to Turkey as soon as possible.