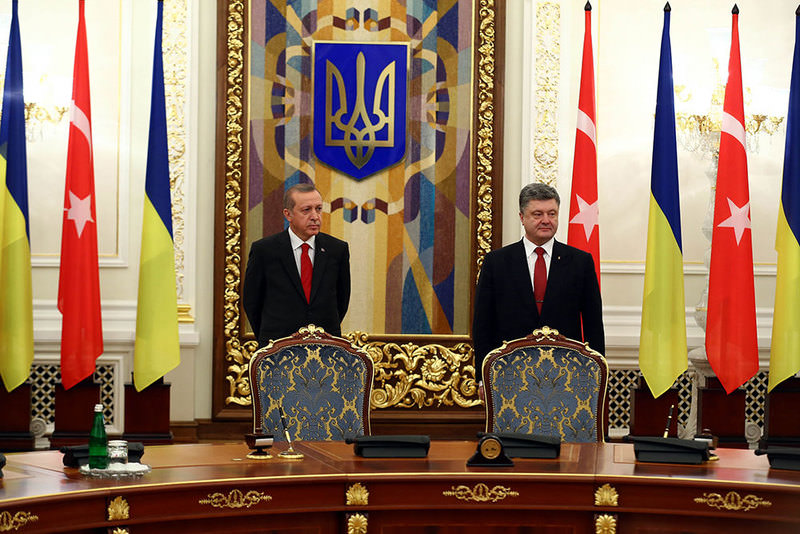 | Photo: AA
by Daily Sabah Mar 20, 2015 12:00 am
In a joint press conference held in Kiev with his Ukrainian counterpart, Petro Poroshenko, Turkish President Recep Tayyip Erdoğan has announced that Turkey will provide Ukraine with a $50M loan to help cover its budget deficit and give $10M as humanitarian aid for the displaced Ukrainian people.

During his visit to the fourth meeting of High Level Strategic Council between Turkey and Ukraine, President Erdoğan made exclusive remarks regarding the ongoing conflict in Ukraine and economic relations with the war-torn country.

"Turkey is ready to further improve its strategic partnership relation with its friend and neighbor Ukraine" Erdoğan said.

"We have expressed our views on Ukraine's territorial integrity, including Crimea, on every platform" Erdoğan added, and expressed Turkey's support for Ukraine to improve its relations with European institutions.

Erdoğan wished for peace to be achieved urgently and a solution to be found based on Ukraine's territorial integrity. "We support the consensus signed in Minsk on February 12 and we wish for a holistic practice of precautions package" Erdoğan stated, referring to the ceasefire agreement between Ukranie and pro-Russian separatists along with humanitarian issues and political and ecomonic status of Luhansk and Donetsk regions.

"As Turkey has historic and cultural ties with Crimea, we monitor the situation of Crimean Tatar Turks who stand firm and we continue to bring forward the problems of our brothers," Erdoğan stated regarding the status Crimean Tatar Turks following Russian annexation of the peninsula. Crimea was ruled by Turkic states and than later by Ottoman Empire, from 9th century up to 1783 when it was annexed by the Tsardom of Russia. Crimean Tatars make more than 10 percent of its population, despite repression in Soviet era and the deportation suffered in 1944.

At the end of 2014, the trade volume between Turkey and Ukraine had increased to $6 billion, Erdoğan said, and he stated that there is a common aim to increase this volume to $10 billion in 2017 and $20 billion in 2023. Erdoğan noted that the free trade agreement between Turkey and Ukraine will be concluded in a short period to achieve these goals. He also emphasized the current role of Turkish construction firms in Ukraine with projects totaling $4.5 billion, and said that they are ready to rebuild the areas affected by the conflict.

Erdoğan stated Turkey's role in the Black Sea is security insurance, and said that, as a NATO country, it is ready with all precautions taken against threats.