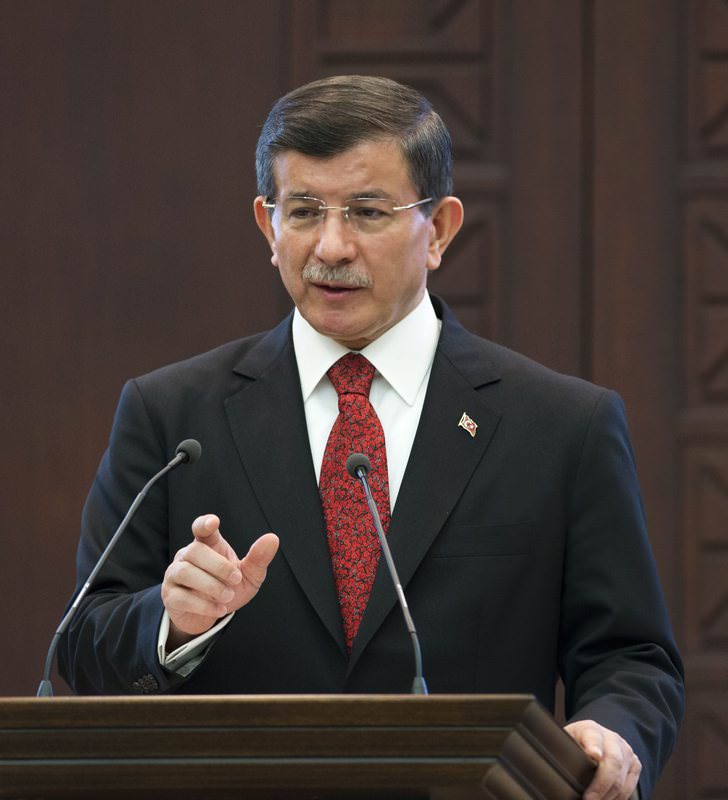 by Ayşe Şahin Apr 20, 2015 12:00 am
Prime Minister Ahmet Davutoğlu has expressed his condolences to the grandchildren of Armenians who lost their lives during forced deportations from Anatolia in WW I in a statement issued four days before the annual commemoration of the events. In his message, Davutoğlu said that Turkey will honor the deceased Armenians in a ceremony that will be held on April 24 at the Armenian Patriarchate in Istanbul. The ceremony is significant, as it is the first of its kind that Turkey has held to mark the 1915 incidents. The move is also a reflection of the genuine will of the government to ameliorate ties with Armenians that have been soured by the constant pressure of the community to brand the events as genocide and Turkey's rejection of the label.

"As descendants of nations with different ethnic and religious origins who endured these sufferings amid the conditions of WWI, we understand what the Armenians feel. We remember with respect the innocent Ottoman Armenians who lost their lives and offer our deep condolences to their descendants.
It is both a historical and humane duty for Turkey to uphold the memory of Ottoman Armenians and Armenian cultural heritage," Davutoğlu said in his message.

He continued: "With this in mind, a religious ceremony will be held by the Armenian Patriarchate on April 24 this year and Ottoman Armenians will be remembered in Turkey, just as they will be across the world." He also underlined how meaningful it would be "if Turkey and Armenia had been able to commemorate Ottoman Armenians together with a ceremony that befits both nations," recalling it was what President Recep Tayyip Erdoğan also said in last year's message when he was prime minister.

Erdoğan issued a message ahead of the 99th year commemoration of the 1915 incidents last year. In an unprecedented move, Erdoğan extended his condolences to the grandchildren of Ottoman Armenians who lost their lives in the 1915 events.

Meanwhile, EU Minister and Chief Negotiator Volkan Bozkır, Foreign Minister Mevlüt Çavuşoğlu and Deputy Prime Minister Bülent Arınç spoke about the issue. Çavuşoğlu said Turkey will not give up its efforts to reconcile with Armenians. Bozkır said Turkey is happy living with Armenians and the issue should not be restricted within the definition of genocide. Arınç gave a brief press statement on Monday, where he said: "We are the protector of oppressed nations, we never betrayed them. We know that there were tragic events that the rebellious gangs who were once considered loyal nations had to face. We did not commit genocide on purpose or by will."


Turkey's official stance on the matter is that it does not deny that there were killings of Armenians during the forced deportation of the community in WWI, which was a decision delivered by the Ottoman government to handle the insurrection. However, they firmly deny that the killings amount to genocide, and claim there was a lack of intention to deliberately destroy the community. Turkey also claims there were losses on both sides, and rules out any discrimination against Turks in appraising the events. Despite pressure to implicate Turkey in the highly serious crime of genocide, Turkey maintains its sympathy for the community and makes efforts to heal its wounds.

"It is possible to establish the causes of what happened in WWI and those who were responsible for it. However, laying all the blame through generalizations on the Turkish nation by reducing everything to one word and compounding it with hate speech is both morally and legally problematic," Davutoğlu said. He also added: "We believe that when history is no longer exploited for political purposes, such a mature and morally sound outcome can be attained," and called for an objective way of looking at things.

He also said: "The scars left by the exile and massacres that Turkish and Muslim Ottomans were subjected to a century ago are still vivid in our minds today. To ignore this fact and discriminate between pains suffered is as questionable historically as it is mistaken morally."

Turkey, the successor of the Ottoman Empire, which is held responsible for the killings, has been facing intense pressure from the Armenian diaspora which has politicized the issue ahead of the incidents' centennial commemoration, possibly, as some historians have argued, to acquire reparations. Turkish officials have repeatedly called for the issue to be analyzed by historians and have warned that politicizing such a sensitive matter harms the community itself.

Davutoğlu said: "In Turkey, every viewpoint is freely expressed and openly debated. Documents and knowledge of every kind can be investigated. By providing these means, Turkey is taking significant and positive steps toward the building of a common future. As descendants of two ancient peoples who 100 years ago shared the same destiny, whether in joy or in sorrow, our common responsibility and calling today is to heal century-old wounds and re-establish our human ties once again. Turkey will not remain indifferent to this responsibility, and will continue to do its utmost for friendship and peace."

Ankara has already put into practice policies like the returning of confiscated property, the assigning of bureaucrats of Armenian origin and bringing life back to their places of worship as part of its democracy initiatives. But these policies undermine the efforts of the Armenian diaspora, Armenia and Western countries, which have taken the 1915 issue to their parliaments with the aim of isolating Turkey.

He concluded his statement by saying: "We are calling on all third parties to adopt an approach based on just memory and a common peaceful future, rather than aggravating age-old wounds. It is with these feelings and thoughts that we once more commemorate with deep respect the Ottoman Armenians who lost their lives during the relocations in 1915, and we share in the grief of their children and grandchildren."