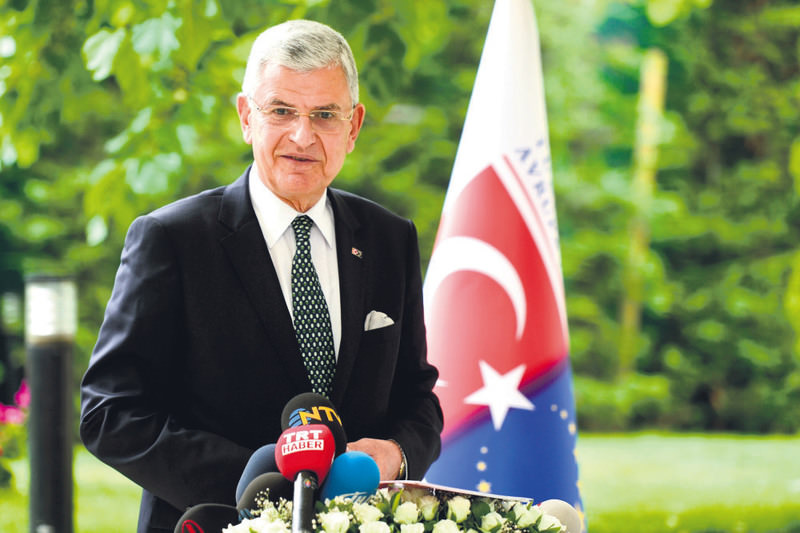 by Ali Ünal Jun 02, 2015 12:00 am
EU Minister and Chief Negotiator Volkan Bozkır has sent a letter to European Parliament (EP) President Martin Schulz, EP Foreign Affairs Committee Chairman Elmar Brok and leaders of political groups in the EP on Turkey's concerns about the recently drafted motions for a resolution on the 2015 Progress Report on Turkey.

Bozkır said that three subjects in the proposal are crucial for Turkey. He said the EP's reference to a resolution dated April 15, 2015, regarding the 1915 incidents, an appeal for the PKK's removal from the EU's terrorist organizations list and other appeals for suspension of financial aid or not granting new chapters in Turkey's accession process to the EU that would hinder the process in the final form of the Progress Report would be considered intolerable.

Bozkır also highlighted that the finalized report must not be biased or negatively affect the ongoing negotiations for the resolution of the Cyprus issue.

He raised concerns of these issues during his meeting with EP Rapporteur for Turkey Kati Piri last week in Ankara. Speaking to journalists after talks with Piri, Bozkır said that if the upcoming EP Progress Report for Turkey includes the 1915 incidents it would be declared null and void by Turkey.

Pointing to the EP's acknowledgment that the 1915 incidents amounted to genocide, Bozkır said Turkey did not accept the decision and if there is a reference to the 1915 incidents in the Progress Report, it will not be accepted by Turkey, which would be a first. Bozkır further added that Turkey will not accept the report if it hinders the continuation of the negotiation process and implied an end to the EU's economic contributions to Turkey.

The EP Progress Report on Turkey in its EU membership bid will be voted on at a general session of the EP in Strasbourg on June 9-11.

Turkey has been a candidate country to join the EU since 1999. Negotiations for the accession to the EU began in 2005. Turkey must comply with 35 policy areas, or chapters, setting out reforms needed to become a member.