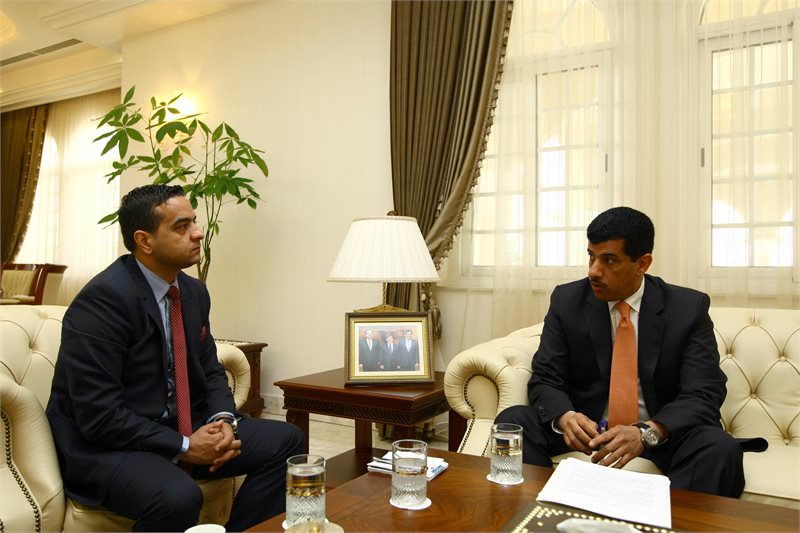 by Ali Ünal Jun 19, 2015 12:00 am
Qatari ambassador to Ankara Salem Bin Mubarak al-Shafi said that Qatar has contributed to the efforts against the Islamic State of Iraq and al-Sham (ISIS) through various methods and underlined that they consider ISIS a terrorist organization to be fought against since the threat first emerged in the region. Speaking exclusively to Daily Sabah, the Shafi stressed the need for a broad and comprehensive strategy to eradicate ISIS. "It will not be possible to eradicate ISIS without eliminating the elements that paved the way for its creation and that contribute to its growth along with the senseless murders and sectarian policies causing isolation and alienation in Syria and Iraq," he said.

Pointing out that he represented the Qatar at the Counter-ISIS Coalition Small Group Ministerial meeting on June 2 in Paris, Shafi said that at the meeting in Paris they signified the importance of the implementation of the Geneva I Conference decisions. "To protect the unity of Syria and to be more effective in the fight against ISIS, we highlighted that the decisions taken at the Geneva I Conference should be implemented hastily and that [Syrian President Bashar] Assad must go," he said.

Qatar is the leading Arab country exerting efforts for the settlement of regional disputes and the country is keen to effectively participate in all issues and challenges that confront the Middle East. Moreover, Turkey and Qatar share the same perspective on several foreign policy issues including Syria. Answering questions about the recent media reports that claim the possibility of a joint Saudi-Turkish-Qatari operation against the Syrian regime, Shafi said that the claims do not reflect reality. "As you say, these are media reports. We believe that the Syrian people will emancipate themselves from both Assad and terror. However, what obstructs the Syrian people are the interventions of various countries that provide funds, weapons and manpower to Assad. Assad has destroyed the infrastructure, killed over 300,000 people and forced around 10 million of his people to become refugees. The international community did not do its duty, which is to intervene in order to protect the Syrian people, which in turn caused a power vacuum later to be filled by some extremist groups such as ISIS. We are responsible to provide support to the Syrian people as well as achieving a transition without Assad and fighting against ISIS," he said.

There are historic ties between Qatar and Turkey and significant progress has been achieved in recent years with regard to relations between the two countries. In addition, the military cooperation agreement signed by Turkey and Qatar in December 2014, which offers extensive military operations went into effect recently. Regarding the agreement, Shafi said that it is a beneficial agreement for both countries. "For some time, we have been working to strengthen the bilateral relations between Qatar and Turkey in various fields. Our aim is to achieve integration. We can assure you that Qatar and Turkey's cooperation is aimed at providing security and stability to the region and its people. This is how we perceive the agreement," he added without giving further details.

About how a permanent deal between Iran and P5+1 countries would affect the region, Shafi said that it depends on whether they fulfill their obligations or not. "If they do not fulfill them, the negotiations will reach an impasse. I believe that both parties at the negotiation have come too far to withdraw. It is important that if they agree upon the terms, this agreement should not cause nuclear proliferation and accelerate the movement of militias in Syria and Iraq. We hope that this agreement will contribute to regional peace and stability. Naturally, this requires an objective control mechanism that will continuously observe whether both parties adhere to the terms of the agreement," he said.In the wake of the FIFA corruption scandal, there are media reports that Russia and Qatar could be stripped of hosting the World Cup if evidence emerges of bribery in the bidding process. Commenting on this issue, Shafi said that these are only allegations and lies. "Qatar, like the other candidate countries, has given the file to be the host. Our file was complete and Qatar was in a more advantageous position. This is what made us the host of the World Cup. FIFA is a prominent and grand institution. For a country to become a host there are rigid conditions that are to be fulfilled. Therefore, it is impossible to be stripped of hosting rights unless there is a violation of a condition. Qatar is a responsible country that moves according to the plan," he said.
Last Update: Jun 20, 2015 1:04 am
RELATED TOPICS