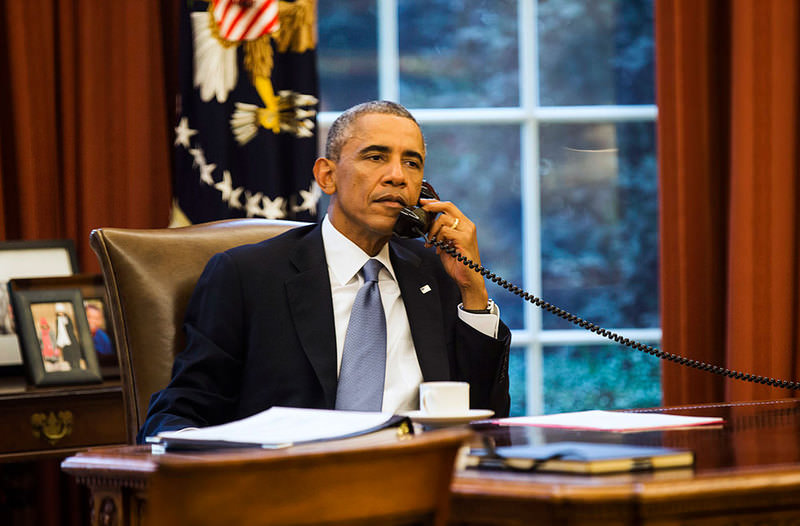 by Daily Sabah with AA Jul 23, 2015 12:00 am
U.S. President Barack Obama condemned the series of attacks in eastern Turkey during a phone call with President Recep Tayyip Erdoğan on Wednesday, according to the White House.

"We will not allow any developments threatening Turkey's national security both inside and outside its borders," Obama said, according to a NTV news report quoting Turkish presidential sources.

An apparent suicide bombing in Suruç killed 32 people who were working to rebuild the war-torn Syrian city of Kobani. The July 20 attack has been blamed on the Islamic State of Iraq and al-Sham (ISIS).

On Wednesday two police officers were found shot dead in their home in Ceylanpınar in an attack claimed by the outlawed PKK, in retaliation for the Suruç bombing. A soldier was also killed on Tuesday in clashes with the PKK.

During their conversation, Obama spoke with Erdoğan about "deepening our ongoing cooperation in the fight against ISIL [ISIS] and common efforts to bring security and stability to Iraq and a political settlement to the conflict in Syria," the White House said.

Obama and Erdoğan also discussed stemming the flow of foreign fighters and securing Turkey's border with Syria during their call, and Obama "reaffirmed the commitment of the United States to Turkey's national security" as the leaders vowed to continue their close cooperation.