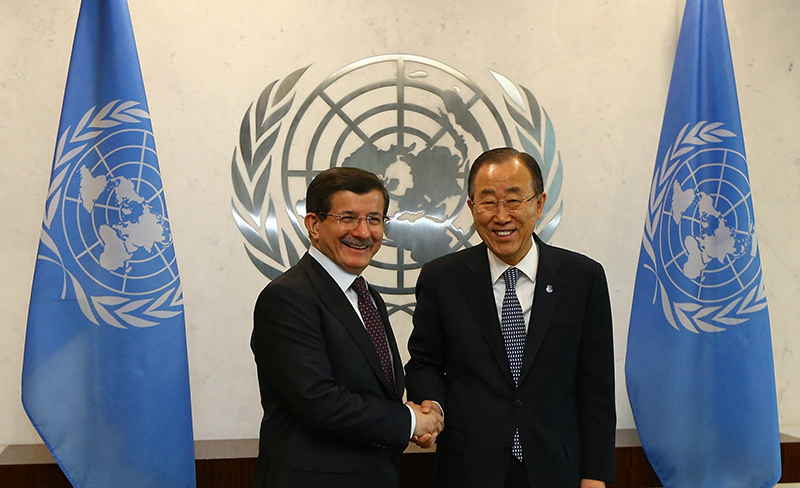 | AA Photo
by Anadolu Agency Sep 25, 2015 12:00 am
Turkish Prime Minister Ahmet Davutoğlu has arrived in New York on Thursday night as part of a six-day visit which will include various meetings at the 70th UN General Assembly.

On Friday, the Turkish premier is scheduled to attend a dinner hosted by the Turken Foundation -- a New York-based organization providing various kinds of help for Turkish students -- where he will meet with representatives of the Turkish-American community.

Also during the event, Davutoğlu is expected to meet with Ahmed Mohamed, the Muslim teen who made headlines last week when he was arrested after a homemade clock he took to his Texas school was mistaken for a bomb.

On Saturday, Davutoğlu will co-chair one of the six interactive dialogue sessions of the UN summit for the adoption of the post-2015 development agenda.

A meeting with German Chancellor Angela Merkel is also scheduled that day.

He will deliver Turkey's statement for the summit on Sunday and is expected to hold meetings with UN chief Ban Ki-moon, Iranian President Hassan Rouhani, Jordan's King Abdullah II and Belgian Prime Minister Charles Michel. He will conclude the day with a meeting with Turkish citizens residing in the U.S.

Davutoğlu is expected to hold a press conference at the UN headquarters on Monday, the day when the annual "general debate" at the UN General Assembly begins. On the margins of the marathon debate, he will attend a UN peacekeeping summit hosted by U.S. President Barack Obama.

On Tuesday, the Turkish prime minister is expected to hold financial talks with foreign investors and businessmen, and attend a meeting co-organized by the Union of Chambers and Commodity Exchanges of Turkey and the U.S. Chamber of Commerce.

He will participate in a counterterrorism summit, also hosted by Obama. He may also meet with EU Council President Donald Tusk.

On Wednesday, the final day of his trip, Davutoglu will hold a press conference with UN Secretary-General Ban Ki-moon to promote the 2016 World Humanitarian Summit, which will take place in Turkey. The first-ever global humanitarian summit of this scale will seek to find new ways to tackle the world's humanitarian needs.

Also on Wednesday, Davutoğlu will deliver his General Assembly general debate speech. Together with Palestinian Authority President Mahmoud Abbas, he will also attend the Palestinian flag-raising ceremony at the UN headquarters.