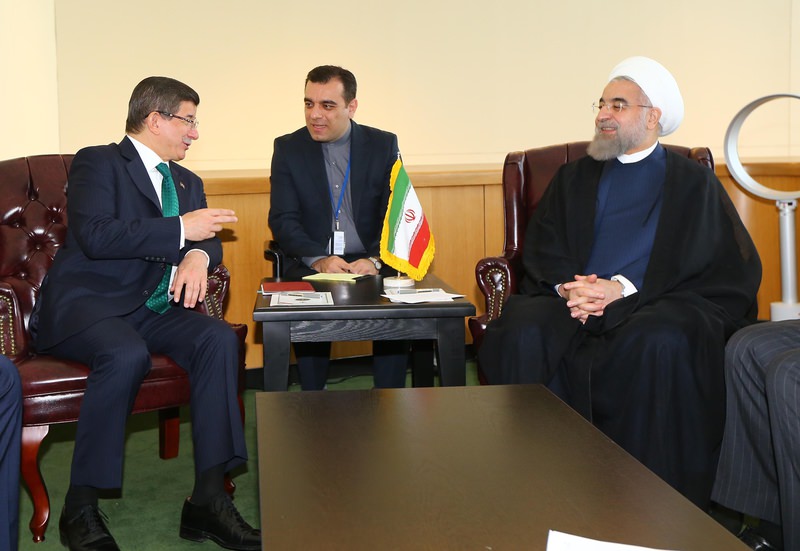 by Daily Sabah with AA Sep 28, 2015 12:00 am
Turkish Prime Minister Ahmet Davutoğlu met with Iranian President Hassan Rouhani in New York on Sunday to discuss bilateral relations, as well as the regional conflicts in Syria, Yemen and Iraq.

The closed-door meeting at the UN headquarters was held on the sidelines of the 70th General Assembly of the world body.

The leaders agreed to deepen economic ties and continue dialogue on regional conflicts in Syria, Yemen and Iraq despite disagreements over a range of issues, according to Turkish Prime Ministry sources.

Turkey and Iran have been pursuing different policies about the regional crisis, Iran strongly backs Syrian President Bashar al-Assad while Turkey has called on him to step down and condemned his crackdown on opposition rebels.
The two countries also have a dispute about the situation in Iraq and the Yemen crisis. Turkey has voiced its concerns over the presence of Iranian commanders in Iraq leading the Iraqi security forces as well as of the Iranian-backed Shiite militias, which have frequently been accused by the U.S., rights groups, and Sunni groups of targeting innocent Sunnis.

During the meeting, Davutoğlu voiced concerns to Rouhani about false news reports published by Iranian media about Turkey, sources said.

Following the meeting, Davutoğlu joined an informal working lunch of world leaders on the upcoming climate change conference that will be held in Paris in December.