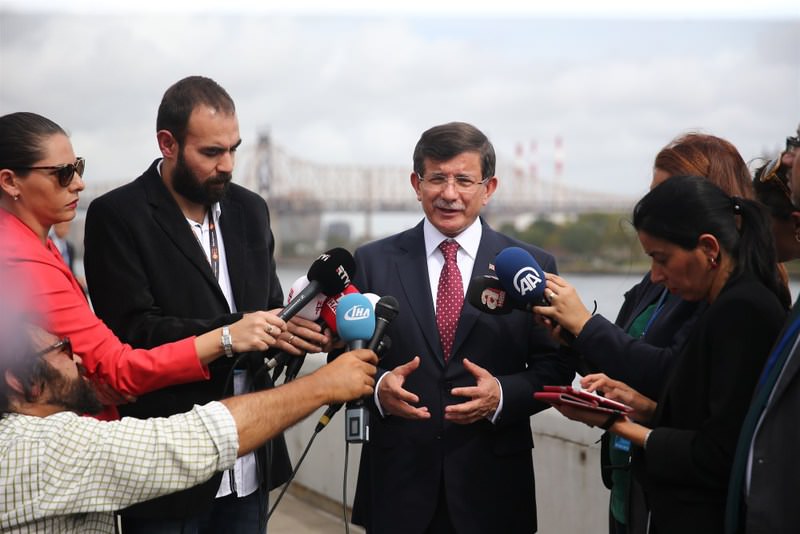 Leaders of the U.S., U.K. and France see Turkey's demand for creating a safe zone in Syria as ‘more than needed,' PM Davutoğlu told reporters. Turkey argued for awhile that safe and no-fly zones should be established in Syria

Prime Minister Ahmet Davutoğlu was "pleased" to hear that the leaders of three fellow NATO members were extending their support to the idea of establishing a safe zone in northern Syria, a policy Ankara has pursued for the last two years.

Speaking to reporters in New York on Tuesday, Ahmet Davutoğlu cited recent discussions with the leaders of the U.S., the U.K. and France over the creation of a zone inside war-torn Syria to deal with the current refugee crisis. "I am very pleased to observe that the three leaders see Turkey's demands on a safe zone as more than needed and right during our discussion both with Mr. Hollande, Mr. Obama and Mr. Cameron," he said.Davutoğlu added that the idea of establishing a safe zone is not related to Turkey's national interests, "but rather to prevent the spread of the refugee problem while keeping the refugees in Syria and offering the best services [to them] in Syria, ensuring everyone remains in their homeland in the safe zone." He added what made him happy was the handling of the refugee crisis by every country at the U.N. General Assembly meetings, saying: "It is an important step."

Europe is facing its biggest refugee crisis in decades, with thousands of asylum seekers from Middle Eastern and African countries trying to reach the continent. The majority of these are Syrian refugees seeking to flee a civil war that has claimed more than 250,000 lives since 2011 and resulted in one of the largest refugee exoduses since World War II.

The U.N. refugee agency says of the latest million people to flee Syria, 95 percent of them have gone to Turkey, which presently hosts more refugees than any other country in the world. Of those in Turkey, more than 2 million are Syrian.

Furthermore, France will discuss with its partners in the coming days a proposal by Turkey and members of the Syrian opposition for a no-fly zone in northern Syria, French President Francois Hollande said on Monday.

Struggling with more than 1.8 million Syrian refugees, Turkey has long campaigned for a "no-fly zone" in northern Syria to keep ISIS and the PKK's Syrian affiliate the People's Protection Units (YPG) from its border and help stem the tide of displaced civilians trying to cross.

France has also previously pushed the idea that has gained some traction in Europe with hundreds of thousands of Syrian and Iraqi refugees fleeing the region to Europe with little hope of seeing an end to the crises.

French Foreign Minister Laurent Fabius "in the coming days will look at what the demarcation would be, how this zone could be secured and what our partners think," Hollande told reporters on the sidelines of the annual United Nations General Assembly. "Not only would it protect those living in these zones, but, and this is the idea behind it, refugees could return to this zone," Hollande said.

Hollande said such a proposal could eventually be rubber-stamped with a U.N. Security Council resolution that "would give international legitimacy to what's happening in this zone."

Security Council diplomats have said that Russia, which backs Syrian President Bashar Assad in the civil war, would not support any such resolution.

Turkey had proposed the establishment of a safe zone that would both help Syrians fleeing their homes as well as refugee-taking countries who will be relieved of the heavy burden refugees place on host countries. The safe zone, which would be accompanied by a no-fly zone jointly protected by several countries, has not come to fruition yet as the international community remains reluctant to establish such a zone.

"Turkey suggests forming a safe zone for refugees," a senior Turkish official said. "Otherwise a new wave of refugees will probably become inevitable. This issue has to be resolved within Syria," the official said, also calling on partners the U.N., European Union and the United States "to focus on the root cause."
RELATED TOPICS