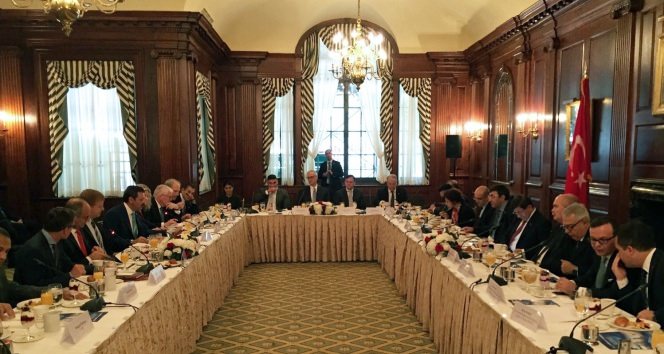 by Ragıp Soylu Oct 01, 2015 12:00 am
Top Turkish officials snubbed the most important Turkish-American business forum this year, where American officials undiplomatically criticized the Turkish government regarding its domestic policies.

The American-Turkish Council (ATC) – a Washington-based business association mainly consisting of the large American and Turkish defense companies – held its 34th annual conference on Monday, and the number of attendees was a new low for many loyal participants. The conference has hosted many notable names, such as U.S. Vice President Joe Biden, and multiple Turkish defense ministers in previous years; however, this year, Turkey only attended the conference with a general from the Turkish General Staff and Defense Ministry Deputy Undersecretary Celal Tüfekçi.

"Every year, fewer Turkish officials are attending this conference. I think some controversial remarks by the ATC management last year made Turks unhappy. Of course the members are aware of the Turkish disappointment, but no one seems to be able to shake off this coolness," said a businessman from a top American defense company.

Last year, Ambassador James Holmes, then-head of the ATC, was forced to resign due to the government's anger over his suspected moral support for the controversial Gülenist-led corruption inquiry in late 2013, which was labeled a coup attempt by the government at the time. Since then, the ATC has chosen a new president but the differences could not be bridged. Even worse, this year's keynote speaker, Arizona Republican Senator John McCain, directly targeted President Recep Tayyip Erdoğan, accusing him of trying to consolidate power at the expense of democratic freedoms. "I was surprised that he criticized Erdoğan and not [U.S. President Barack] Obama" said another American businessman.

John Bass, the American Ambassador to Ankara, voiced a similar tone during his speech at the annual dinner. He said the U.S. was concerned that voters in Turkey were in danger of not being able to make an informed choice during the elections due to the deteriorating media landscape. He also underscored the importance of election safety in the country.

No Turkish official commented on American domestic politics during the conference. However, a Turkish official did raise Ankara's discomfort concerning the conference in a carefully crafted diplomatic way. Tüfekçi said in his speech that the conference had been losing some momentum and becoming somewhat less attractive than before. "I hope the stagnation would be resolved soon by stronger communication. It is important to observe the sensitivities of both nations in such events" he said.

He told Daily Sabah that even though this year was his first time attending, it was clear that the Turkish side was unhappy. "There are many problems that I cannot specify. For example, undersecretary İsmail Demir was supposed to talk during this panel, but his American counterpart was not here so Demir left the conference. There are many organizational problems."

At certain points, the disagreement between Turkey and the United States came to the surface as well. Lt. Gen. Salih Ulusoy differed from his American counterparts during a panel on defense and security, and said the U.S.-backed Syrian Kurdish group, the People's Protection Units (YPG), was linked to the American-designated terrorist organization the PKK. He said the YPG was founded by the PKK and such a link was declared by the PKK itself to the media in the past. The general's statement caught senior American defense officials by surprise. Deputy assistant secretary of defense, James Townsend, was one of the panelists, and he preferred to remain silent over the Turkish general's comments. Following the panel, a journalist from state-run Anadolu Agency pressured Townsend about whether he would respond to the general's statement. "The facts speak for themselves," he said.
RELATED TOPICS