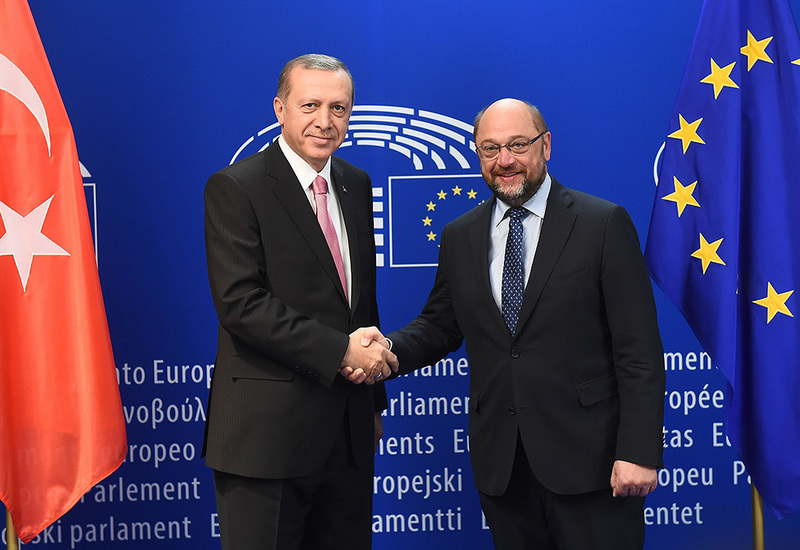 During his visit to Brussels, President Erdoğan came together with EU leaders, who reportedly sought Ankara's help to overcome the refugee influx to Europe. Erdoğan criticized the EU's reluctance to take responsibility in solving the Syrian crisis

Leaders Leaders from the European Union met with President Recep Tayyip Erdoğan and discussed a possible plan to help Ankara cope better with the continuous flow of refugees from Syria and Iraq and limit the people heading to Europe from Turkey.

Erdogan arrived in Brussels on Monday for talks with European Council President Donald Tusk, European Commission President Jean-Claude Juncker and European Parliament President Martin Schulz. The EU wants to "have a contract of mutual confidence that is necessary, given the central role Turkey has played in the refugee crisis," European Commission spokesman Margaritis Schinas said.

Speaking at a joint press conference, Tusk said visa liberalization for Turkish citizens, smuggling and establishing a safe zone in Syria was among the subjects discussed with Erdoğan. He further stressed that the EU "needs Turkey" to solve the refugee influx into the 28-bloc union.

Erdoğan said Ankara would like to see dialogue and cooperation with the EU to deepen further. "It is in the interest for both parties to strengthen dialogue. EU membership continued to be a strategic choice for Turkey," he said.

Saying Turkey has taken in 2.2 million Syrian refugees, Erdoğan called on the EU to take responsibility. "From the very beginning Turkey shouldered this responsibility on behalf of the international community. We see more recently that EU countries are coming face to face with the Syrian crisis," he said.

Erdoğan said Turkey's domestic fight is not directed at a specific ethnic group or identity, but the PKK terrorist organization. "Our goal is to break the back of the terrorist organization that dangers lives of our citizens," he said, adding that Turkey will never go back from the democratization steps it has taken over the past 13 years.

"The key to an effective anti-terror fight is international solidarity. The root cause of the refugee crisis in the war in Syria and [President Bashar] Assad's state-sponsored terror. Turkey came up with three points to help solve this issue, the train-and-equip program and safe and no-fly-zones," he said.

Ankara stresses that the crisis cannot be solved completely because the President Bashar Assad and his regime are still present in the country and along with financial support for the countries taking in refugees, European countries must take them on a humanitarian basis, disregarding their professions or religions.

Turkey has around 2 million refugees, many from Syria and Iraq. Tens of thousands of people fleeing conflict and poverty have been crossing from Turkey into Greece in the hope of finding better lives in Europe, and the EU wants Ankara to do more to stop them from setting out.

The European Commission hopes to generate around 1 billion euros ($1.12 billion) in European funds to help lessen the impact of refugee arrivals on Turkey, which is a candidate for EU membership. A commission team was also due in Turkey later Monday to assess cooperation on the ground.
Last Update: Oct 06, 2015 10:56 am
RELATED TOPICS