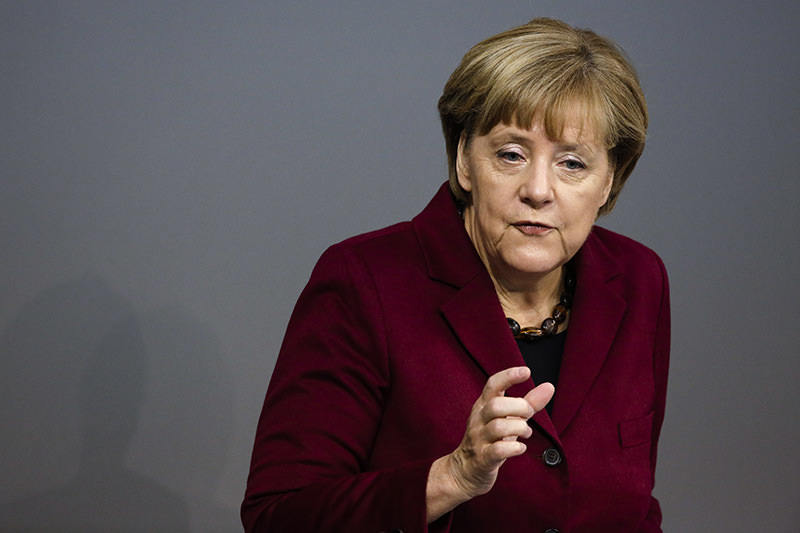 German Chancellor Angela Merkel delivers a speech ahead of the EU summit in Brussels at the German parliament Bundestag in Berlin, Germany, Thursday, Oct. 15, 2015 (AP Photo)
by Daily Sabah with Reuters Oct 15, 2015 12:00 am
German Chancellor Angela Merkel said Turkey plays a key role in solving the "historic task" of dealing with Europe's migrant crisis and that the European Union should do more to help Ankara deal with the influx of refugees.

As a bitterly divided EU struggles to cope with hundreds of thousands of people fleeing war in the Middle East, Asia and Africa, securing the cooperation of Turkey is seen as increasingly central to managing the problem.

Addressing the Bundestag lower house of parliament before attending an EU summit in Brussels later on Thursday, Merkel said a joint European effort was required to tackle the influx.

"Without a doubt, Turkey plays a key role in this situation," she said. "Most war refugees who come to Europe travel via Turkey. We won't be able to order and stem the refugee movement without working together with Turkey."

This included giving Turkey more support in caring for the refugees and providing humanitarian aid, as well as helping to secure borders and combat criminal smuggling rings, she said.

European leaders meet in Brussels on Thursday to discuss strategies for dealing with tide of refugees trying to enter Europe. The agenda includes increasing cooperation with Turkey and other countries bordering Syria to try to keep millions of refugees in the region.

The chancellor said she was sensitive to concerns in Germany about the need to assert European values in talks with Turkey while also addressing the refugee crisis.

Turning to Turkey's longstanding application to join the EU, she added: "Treaties will be adhered to, and the EU's negotiations with Turkey conducted without pre-judging."

Merkel said the conflict in Syria is the biggest cause of the migrant flows to Europe.

"To stabilize the situation in this country, so terribly afflicted by terror and violence, and to bring it peace in the long-term of course we need a process of political dialogue which includes Russia and other international actors, including regional actors," she said.
Last Update: Oct 15, 2015 4:55 pm
RELATED TOPICS