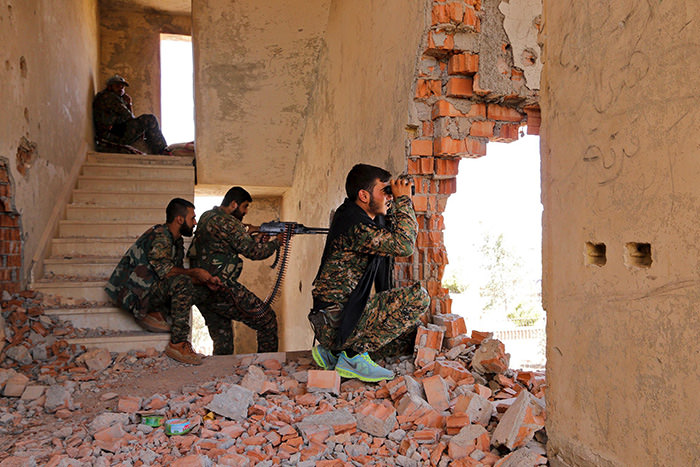 Speaking to Anadolu Agency about the U.N. possibly looking into an Amnesty International report, in which the YPG is strongly accused of committing war crimes and violating basic human rights, Haq called on the responsible to be found and brought to justice.

"The secretary-general has consistently stressed the need for accountability in Syria, calling for, among other things, the referral of the situation in that country to the International Criminal Court," he added.

The report that was released on Tuesday offers proof that the YPG deliberately forced people out of their homes and tore them down. "Satellite imagery of the village of Husseiniya taken in June 2014 and June 2015 analyzed by Amnesty International reflect that 225 buildings were standing in 2014, but that only 14 remained in 2015, a 93.8 percent reduction in one year," one of the proofs from the Amnesty report says.

The YPG has a sizable presence in Syria's north in a conflict that has killed more than 250,000 people and made the country the world's single-largest source of refugees and displaced people.

According to the report, the residents found their homes demolished after the YPG took over. "We left before the YPG entered and returned in the beginning of March 2015. When we came back we saw our homes were demolished. … We don't know who did it, but who else was here other than the YPG?" a villager interviewed by Amnesty researchers in the field said.

The YPG is also accused of the forced displacement of non-Kurds in the region on the grounds that the locals support the Islamic State of Iraq and al-Sham (ISIS) only because they speak Arabic. "They [YPG] told us we had to leave or they would tell the U.S. coalition that we were terrorists and their planes would hit us and our families," a man from the village of Reneen said in an interview with Amnesty researchers.

Faced with the possibility of an investigation following war crimes allegations, the YPG is also accused of extrajudicial detainment, killings and using child soldiers. According to Human Rights Watch, "The Kurdish armed group that controls territory in northern Syria, despite some progress, is still not meeting its commitment to demobilize child soldiers and to stop using boys and girls under 18 in combat."