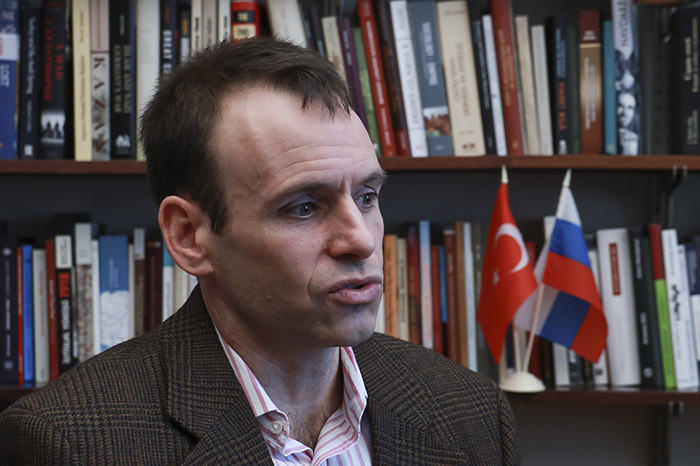 U.S. Academic Michael Reynolds (AA Photo)
by Anadolu Agency Oct 16, 2015 12:00 am
There can be no lasting peace in the Middle East without the presence of a stable Turkey, according to a leading United States academic.

Michael Reynolds of Princeton University told Anadolu Agency that an unstable Turkey would also be a "disaster" for the U.S.

The comments by the associate professor of Near Eastern Studies came days after Turkey suffered its deadliest-ever terrorist attack in the heart of nation's capital. Twin bombing outside Ankara's railway station last weekend claimed 99 lives and injured hundreds.

For so long a rock of stability amid a sea of troubles that is the Middle East, Turkey now faces simultaneous attacks by two terror groups: Kurdish separatist PKK and religious extremist ISIS. All that against the backdrop of a four-and-a-half-year civil war in neighboring Syria.

Reynolds, who is the author of "Shattering Empires: The Clash and Collapse of the Ottoman and Russian Empires 1908-1918", said the PKK is an organization that cannot survive outside conflict and that it can have no future in the future of a democratic Turkey.

"Without war, there is no need for the PKK," he said, adding that the group's rapid response to Turkish airstrikes was a sign that the terrorist group was "well-prepared" for the resumption of violence.

The rise in attacks on Turkey by Daesh and PKK, as well as revolutionary leftist DHKP-C, followed the July 20 Suruç massacre in Şanlıurfa province. Turkey responded by launching airstrikes and other counter-terrorism operations against the groups.

Reynolds said shortly before the start of Turkish airstrikes on terrorist camps, the PKK had already been carrying out a series of terror strikes inside Turkey, such as attacks on police, kidnappings and commandeering trucks.

"Those actions, as well as and in particular that, after the airstrikes started, immediately the PKK attacks all throughout Turkey told me the PKK was very well prepared for the outbreak of hostilities and they had been waiting and planning for the outbreak of warfare," he said.

Founded in 1978, the PKK is considered a terrorist organization by Turkey, EU, U.S. and other nations.

"Turkey has to do everything possible to make sure that this war does not become a war between Turks and Kurds. That's first and foremost," Reynolds said.

"If this war-there are signs that this could happen - becomes an ethnic conflict between Turks and Kurds, it's going to be an absolute disaster for everybody," he added.

Regarding Russian intervention in Syria, Reynolds said the move means the Syrian regime, if not President Bashar al-Assad, now "stands a very good chance of surviving for the next five, 10 or more years".

He said Russia's recent violations of Turkish airspace need to be taken seriously and the encroachments could be a deliberate message by Russian President Vladimir Putin to NATO.

The incidents drew worldwide criticism, with NATO Secretary-General Jens Stoltenberg calling it a violation that "does not look like an accident".

Reynolds said he wants NATO to send a strong indication that Turkey is an important member of the alliance.

"I think oftentimes NATO is taking Turkey for granted. I hope that NATO, without escalating any crisis with Russia inside of Syria, will be clear that it stands behind Turkey and supports Turkey in every way," said Reynolds.