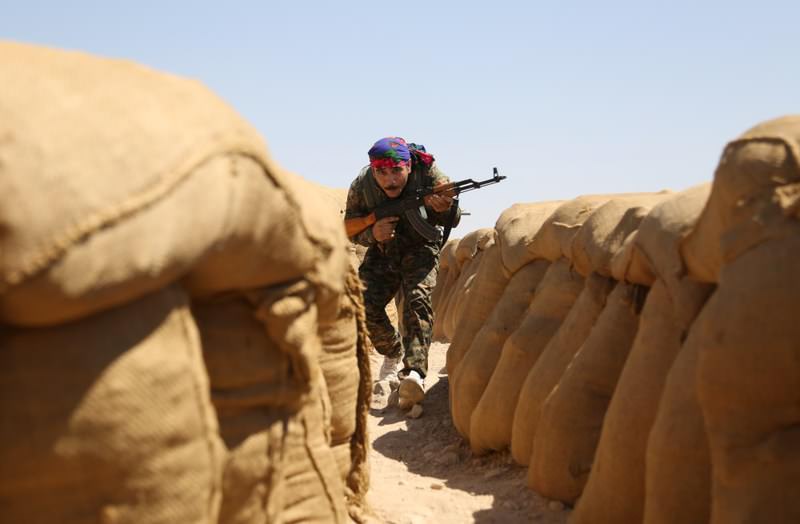 As contradictory statements consecutively come from the U.S. over providing arms support for the PYD, while the PKK-linked group confirmed the issue. Ankara's concerns have escalated since American weapons were seized and stockpiled by PKK

The U.S.'s contradictory statements regarding its support for the PKK-affiliated Democratic Union Party (PYD) and its armed branch, the People's Protection Units (YPG), has escalated Ankara's concerns in the anti-terror fight and its national security interests. While the U.S. considers the YPG a new partner in the region as a result of the failed train-and-equip program for moderate Syrian opposition, Turkey insists that the YPG has become a cover for the PKK in its operations against Turkish security officials.

Although U.S. officials have been reluctant to publicly say whether the U.S. provides arms to the YPG, at a Thursday press briefing, Pentagon spokesman Peter Cook said that some ammunition airdropped by the U.S. into Syria last weekend was recovered by the YPG. However after the briefing he walked back on his remarks as the Pentagon tried to clarify Cook's remarks, saying that only newly established Syrian Arab Forces recovered supplies.

"Sunday's airdrop in northern Syria was intended for and successfully delivered to vetted Syrian Arab forces. We have no indication at this time that any of that equipment was shared with any other groups," according to a note sent to journalists.

It was reported on Wednesday that the intelligence leading Turkish officials to believe that American weapons are in the PKK's hands came from Turkish airstrikes against PKK arms depots in Northern Iraq in the past few months. Special Forces and local intelligence showed that anti-tank mines, rocket launchers, machine guns and anti-aircraft guns given by the U.S. to the PYD were stored in these armories.

Following a statement from the Pentagon on Monday indicating an airdrop had been conducted in efforts to provide arms and ammunition, the Foreign Ministry on Wednesday summoned U.S. Ambassador to Turkey John Bass and Russian Ambassador Andrey Karlov, separately. Diplomatic sources said Bass was told about the PYD lacking good intentions and that the weapons might pass on to the PKK somehow, a development that would threaten Turkey's national security interests.

Speaking at the opening of the W20 (Women-20) Summit, President Recep Tayyip Erdoğan called standing against terrorism a "moral stance." He said that it's unacceptable to differentiate between terrorist organizations, reiterating that Turkey was taking action against all terrorist groups, including the PKK, ISIS, PYD and YPG.

"Turkey is against all terrorist organizations, regardless of their name, aim, discourse and method," Erdoğan said.

President Erdoğan also warned that those who do not support Turkey, but rather back specific terrorist groups are dragging the region into choas.

Meanwhile several Kurdish and Arab groups announced that they have formalized an alliance in a new group called the Syrian Democratic Forces. The alliance was announced via a statement published online by a spokesman for the YPG. "The sensitive stage through which our country Syria is passing and the rapid developments on the military and political front ... require a united national military force for all Syrians, including Kurds, Arabs and Syrians and all others," the statement said.

As the alliance includes mostly YPG militants and only a few thousand people from Arab groups, including the mostly Arab Burkan al-Furat group, the alliance also consists only of syriac Christians.

Much of the Syrian opposition has regarded the PYD with suspicion because of the careful line they have walked since the uprising began in March 2011.

Despite years of repression by Damascus, they declined to take up arms against the regime and have instead focused on building autonomous governance in northern regions, and they are accused of committing serious human rights violations and ethnic cleansing against Arabs and Turkmen.