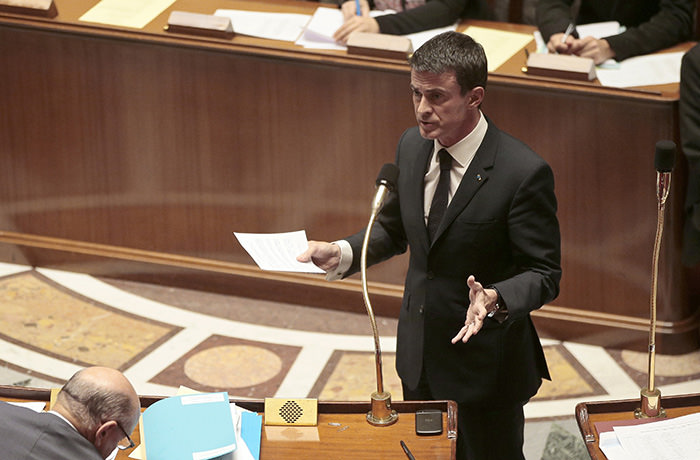 by Daily Sabah with AA Oct 21, 2015 12:00 am
French Prime Minister Manuel Valls showed support on Tuesday for Turkey's accession to the European Union, saying that the stalled EU membership talks must move forward in the National Assembly.

"We hope that these negotiations will progress in the areas in which Turkey is ready," Valls said.

He added: "Turkey is a big country. It is a strategic partner of France and the EU, an ally for the transatlantic alliance [NATO]."

"Therefore, we must continue the dialogue with Turkey and support it in its efforts to host refugees," Valls said.

Valls was the latest European politician to speak out on Turkey's renewed thrust to enter the 28-nation bloc as it seeks Turkish assistance in dealing with the refugee crisis encompassing Europe.

"The refugee crisis that we have in Europe will be even more dramatic and more serious if the EU does not help Turkey financially and politically," he said.

As EU leaders strike deals to provide Turkey with financial support for the 2.2 million refugees it has taken in, Ankara is hoping for an acceleration of the accession process initiated in 1987 as well as visa-free travel in Europe for Turkish citizens.

Valls dismissed the notion of bargaining over the refugee situation.

"The question of Turkey's EU accession remains a long-term perspective that will, in time, be approved by the French people," he said. "So there can be no bargaining, no blackmail, but [there is a] need to aid Turkey."

France has often been portrayed as an opponent of Turkey's EU membership. In 2007, then President Nicolas Sarkozy said Turkey had "no place inside the European Union."

"I can confirm that the British government's policy has not changed," he said in response to a question from former cabinet minister Kenneth Clarke about support for Turkey's EU membership.

"More than 2 million refugees, almost nine out of 10, have stayed in Turkey, and everything that we can do to help the Turks to keep those refugees – perhaps allowing more of them to work and to play an economic part in Turkey – will obviously help in this crisis," Cameron said.

"I think its fair to say that, although the Turks have done extraordinary work in looking after refugees – their refugee camps are some of the best anywhere in the world – we all need to help them to do more to stop people taking off from western Turkey into the waters of the Mediterranean, because that is a journey on which so many have died," he added.
Last Update: Oct 21, 2015 1:20 pm
RELATED TOPICS