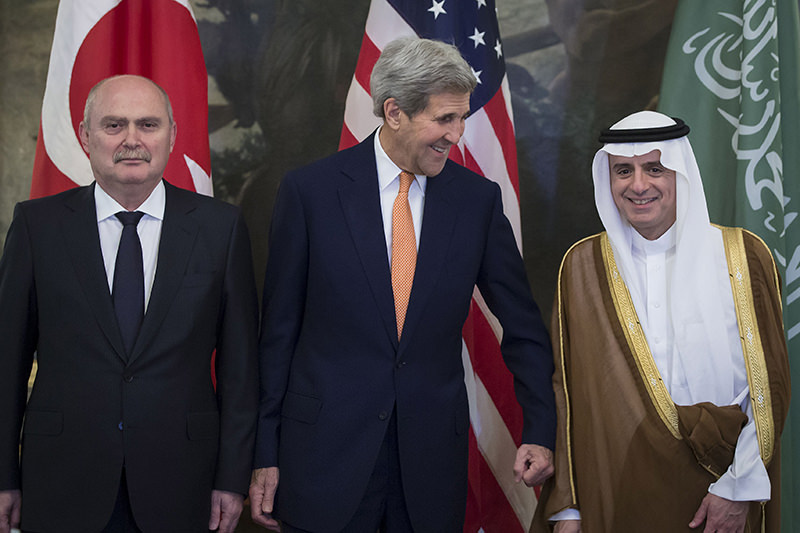 (LtoR) Turkish Foreign Minister Feridun Sinirlioglu, US Secretary of State John Kerry and Saudi Arabia's Foreign Minister Adel al-Jubeir pose for a photo upon arrival for a meeting to discuss the Syrian conflict (AFP Photo)
by Daily Sabah with Agencies Oct 23, 2015 12:00 am
Chief diplomats from the U.S., Russia, Saudi Arabia and Turkey came together in Vienna to discuss Syria on Friday, as the ongoing crisis deepens following airstrikes conducted by Moscow and debates on Syrian President Bashar Assad's future regarding the transition government plan on the table. But the four remained deeply divided over the future of Syrian President Bashar Assad.

The top diplomats from the four countries agreed to meet again in an expanded format with representatives from other nations next week, but the only concrete result of this week's talks appeared to be an agreement between Jordan and Russia to coordinate military operations in Syria. U.S. Secretary of State John Kerry said there was no decision on whether to invite Iran, a major patron of Syria.

Kerry opened the talks in Vienna with his Russian, Saudi and Turkish counterparts aimed at reviving a moribund effort to end Syria's civil war.

Kerry began a day-long series of meetings at a luxury hotel in the Austrian capital by consulting with Saudi Foreign Minister Adel al-Jubeir and Turkish Foreign Minister Feridun Sinirlioğlu, both of whom share the U.S.'s view that Assad must go for the conflict to be resolved. Kerry then met separately with Russian Foreign Minister Sergey Lavrov, whose country is Assad's prime backer.

None of them spoke to reporters at either meeting, both of which took place ahead of a four-way encounter set for later in the day.

Turkey and Saudi Arabia are in favor of Assad leaving office after a temporary process in which he stays in office for a six-month period at most. Previously on Wednesday, Prime Minister Ahmet Davutoğlu spoke on a possible six-month transition period with Assad and said: "We need to dwell on formulas in which Assad leaves. I wish Assad could have stayed longer there [in Moscow], and the Syrian people could feel at ease, then the real transition period would have started," referring to Assad's visit to Moscow.

A senior diplomat also told a group of journalists on Monday that Ankara is ready to accept a transition period in which Assad remains in symbolic power for six months before leaving office. "Work on a plan for Assad's departure is underway. ... [Assad] can stay for six months and we accept that because there will be a guarantee of his departure," he said.

Syria is now in its fifth year of a civil war that has killed hundreds of thousands of people, contributed to a massive refugee crisis in Europe and has been complicated by the emergence of the Islamic State of Iraq and al-Sham (ISIS) and Russia's direct military intervention.

Meanwhile, in televised remarks on Thursday, Lavrov said he wanted to provide "firsthand information" about the Russian air campaign against ISIS terrorists in Syria, but also talk about a future political process. He said Moscow is eager to invite other countries from the region to the talks, especially Iran. Without Iran's involvement, Lavrov said Moscow "remained convinced" that a settlement of the Syrian crisis had no future.

The meeting comes after Assad's surprise visit to Moscow on Tuesday in his first foreign visit since the outbreak of the civil war in 2011, while airstrikes by Russian jets on Syrian opposition targets continue. Accordingly, Assad's future is highly likely to be high on the diplomats' agenda.

Washington thinks that ousting Assad is essential for fighting ISIS with the moderate Syrian opposition. In a previous televised interview, U.S. President Barack Obama said: "And what we've learned is that as long as Assad remains in power, it is very difficult to get those folks to focus their attention on [ISIS]," adding that he was "skeptical from the get-go" about the notion of creating an army of moderate forces in Syria.

Yet, Washington's inconsistent policies in Syria since the beginning of the crisis has allowed Moscow to maneuver in favor of staunchly supporting Assad. Although Washington and Moscow apparently agreed on the anti-ISIS fight, Russian jets killing moderate opposition groups, fighting regime forces and even civilians, has stirred tensions.

Russian airstrikes in Syria have reportedly killed 370 people since they began on Sept. 30, around a third of them civilians, a monitoring group said Tuesday.